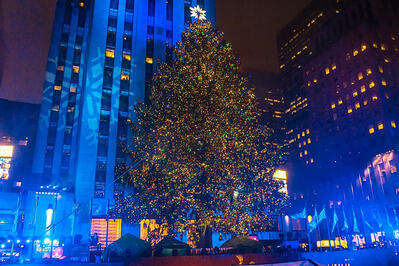 Merry holidays, everyone! Some say Christmas festivities begin the day after Thanksgiving, but the truth is, not a single “Ho, Ho, Ho” should be muttered before America’s greatest Christmas tradition: the annual lighting of the tree in New York City’s Rockefeller Center. The tree for 2020 is a 75-foot tall Norway Spruce, which housed at least one owl (who was safely released back into the wild, but oh the stories she will be able to tell her friends!).

Of course, things will look a little different this year since the coronavirus is putting coal in our stockings. There will be no public attendance at the event — which is going on year 88! — but it will still air on NBC as part of the official yearly gala, Christmas in Rockefeller Center. NBC’s Today anchors — Hoda Kotb, Savannah Guthrie, Al Roker, and Craig Melvin — will be the official emcees for the evening with performances from artists like Kelly Clarkson, Goo Goo Dolls, Jimmy Fallon, and more.

The broadcast will air live on the East Coast on Wednesday, Dec. 2 at 8/7c on NBC, but if you’re looking to just tune in for the actual lighting, it’s slated to occur around 9/8c, in the middle of the broadcast. For all you West Coast folks, the show will be tape-delayed and aired again at 8 PT.

If you’re a cord-cutter who thinks live TV is for dummies, you can tune in online via NBC Live and the NBC App.