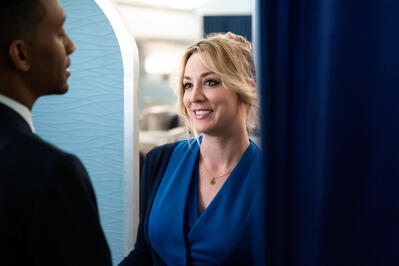 When you tune in to watch the new HBO Max darkly comedic murder mystery The Flight Attendant, and you should, you may be surprised to see Kaley Cuoco playing a role markedly different from Penny on The Big Bang Theory. Cuoco’s choice to play Cassie Bowden, the titular flight attendant who travels and parties internationally, is a shrewd and unexpected follow-up to the broad comedy that catapulted her to stardom.

Adapted from Chris Bohjalian’s best-selling novel of the same name, the miniseries quickly draws the viewer in as Cuoco works a flight to Bangkok and meets an attractive businessman, Alex Sokolov (Michiel Huisman), whom she chats with throughout the flight. Once they land in Bangkok, Cassie tells her crewmate Megan (Rosie Perez) that she’s going to stay in that evening, but she meets up with Alex for a date night that involves dinner, drinking, sex, drinking, showering together, and more drinking. When Cassie wakes up the next morning hungover and hurting in Alex’s luxury hotel suite, she looks over at the man next to her and, well, he’s dead (not a spoiler, it’s in the trailer and it’s the inciting incident that kicks off the story).

Not just dead, but murdered. A shocked and frightened Cassie tries to piece together what happened the night before but the excessive drinking makes it near impossible for her to recall details. And, as we quickly find out, this isn’t the first time Cassie has been drunk to the point of blacking out and forgetting what happened, but it’s never involved a death before and Cassie is freaked out to the extent that she starts making a string of bad decisions. Without revealing all those decisions — because it’s just too much fun watching her make them — it is both oddly compelling and horrifying to watch Cassie react from her core of panic and fear of being accused of murder or possibly finding Alex’s killer and being killed herself.

Back home in New York City, Cassie confides in her high-powered attorney friend Annie (Zosia Mamet), and while Annie is outwardly cool and composed, she knows Cassie is completely out of her depth when it comes to dealing with FBI interviews and being a murder suspect. Mamet’s performance is dry, acerbic, and a smart balance to Cassie’s frenzied energy. In the four episodes HBO Max released early for review, Cassie tries to figure out who killed Alex and the search takes her to all kinds of unexpected places. As Cassie does these things, she’s also having flashbacks, and a creative storytelling device retraces some of her steps and takes us back to her childhood.

Steve Yockey (Supernatural) developed the series for television and he’s done a smart job of selecting what the viewer is shown in each episode. The episodes are also structured such that they leave the viewer wanting more as the mystery deepens. The series also boasts a strong ensemble cast including T.R. Knight as Cuoco’s brother, Bebe Neuwirth as Mamet’s boss, and Rosie Perez as Cassie’s coworker, who gets her own juicy story.

If you’re coming to The Flight Attendant to see the further adventures of Penny, you aren’t going to get it. Instead, you’ll find an energetic, dark comedy that doubles as a murder thriller. And through four episodes, it works.

The Flight Attendant premieres November 26 on HBO Max with the first three episodes. Two new episodes will be released each of the following Thursdays, with the finale airing on Dec. 17.