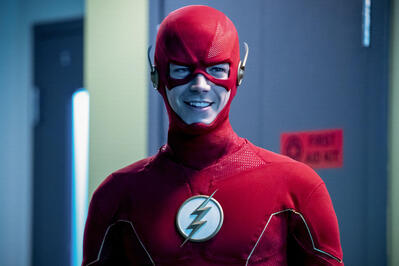 The Flash Season 6 was unexpectedly cut short due to the outbreak of COVID-19, which left more than a few storylines still up in the air. However, it seems like Barry Allen (Grant Gustin) and Team Flash are ready to hit the ground running (pun intended). While Season 6 left off on an unexpected and unconventional season finale, the cliffhanger was still effective. Iris’ (Candice Patton) Mirrorverse arc, Barry’s synthetic Speed Force, and Eva’s (Efrat Dor) evil plans for Blackhole were all left up in the air. Thanks to a new Season 7 trailer and some hints from showrunner Eric Wallace, a little light has now been shed on the upcoming season.

Here’s everything we know so far about The Flash Season 7.

It will return in January 2021. TV Guide can confirm that The Flash Season 7 will premiere on Tuesday, Feb. 23 at 8/7c. That’s about a month after a few of the other CW shows return, but the superhero show does require more special effects in every episod than most shows.

Season 6 storylines will be wrapped up in Season 7. The Flash Season 6 ended on a bit of a cliffhanger, with Iris vanishing in the Mirror World after seemingly developing some mirror powers. Grant Gustin confirmed on The Flash cast’s Stars in the House appearance that we will get our answers in the new season. “Everything that was kind of left in the air at the end of season six we’re going to tie up at the beginning of Season 7 and then continue on with what the writers have planned,” Gustin said.

Hartley Sawyer will not return. Sawyer, who plays Team Flash member Ralph Dibmy (aka Elongated Man) was fired from the series in June after a number of his old racist and misogynistic tweets resurfaced. Showrunner Eric Wallace took immediate action, saying the tweets made him “mad as hell.”

Showrunner Eric Wallace told Entertainment Weekly, “We’re giving the Elongated Man a bit of a rest for a while. But we will leave the door open. I’m not saying by any means that it’s the end of the character. In fact, quite the opposite. We just don’t know when he will return, or in what form he will return.” Wallace also revealed Ralph will make an appearance in the beginning of Season 7 to help send the character off, but he will not be played by Sawyer. “Now thank goodness, Ralph is a guy who can change faces and his appearance in many ways. Without giving any spoilers away, there are a couple of ways that we can have Elongated Man still appear in at least one episode this season to wrap that storyline up, that gets us what we need and still allows fans to say goodbye to the character, at least for the indefinite future”

This won’t be the end of Sue Dearbon (Natalie Dreyfuss) though. Wallace has confirmed that despite Ralph’s departure, we haven’t seen the last of his love interest, Sue. “I called up Natalie and said, ‘Don’t worry, you’re still going to be part of this season. We’ll find a way.’ Now, when I told her that, to be honest, I wasn’t quite sure [how]. But I am happy to report we found a way,” Wallace told Entertainment Weekly. “You’re going to see Sue more than once this year even without the Elongated Man — on her own, making appearances, and helping Team Flash in an unexpected way. And it’s just going to be hilarious because she was so much fun.”

It may not be the final season. Though The Flash is getting on in years for a CW series, showrunner Eric Wallace told TV Guide he has plans for Seasons 8 and 9 of The Flash that he’s started to plot out. Similarly, Grant Gustin told Michael Rosenbaum on his podcast, Inside of You, that before the COVID-19 crisis, he was in talks to extend his contract to include Season 8 and 9.