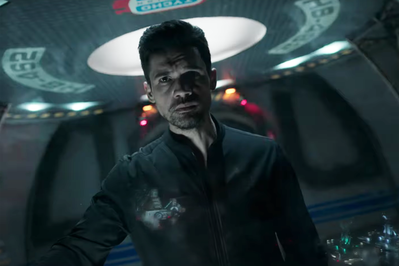 If you’ve been getting more excited with each passing day for The Expanse Season 5 to premiere on Amazon, we have some bittersweet news for you. One of the best sci-fi shows currently airing has been renewed for a sixth season, which will also be its last. Deadline was first to report the news.

Not much is known about what we can expect to see in the final season yet, but Deadline reports that original cast member Cas Anvar will not be returning to the show after facing a number of sexual misconduct allegations during the summer. The rest of the cast will return, as will showrunner Naren Shankar.

Season 6 is tentatively expected to begin production in January, but pandemic restrictions mean that the date could shift.

The fifth season of The Expanse is scheduled to debut on Wednesday, Dec. 16. The first three episodes will premiere at the same time, and Amazon will roll out the rest of the season on a weekly basis rather than dropping the all of the episodes at once. The finale is set for Feb. 3, 2021.

When The Expanse returns, Earth, Mars, and the Belt will be dealing with the fallout of Marco’s (Keon Alexander) attack on Earth in the Season 4 finale. Marco and his Free Navy are launching a massive war to gain Belter sovereignty and power over the inners. When Naomi (Dominique Tipper) finds out that her son Filip (Jasai Chase Owens) is with Marcos, Naomi sets out to free Filip from his father’s destructive influence. Season 5 will also find Amos (Wes Chatham) returning to Baltimore, which means we’ll hopefully be learning more about this character’s backstory and the people who populated his past.