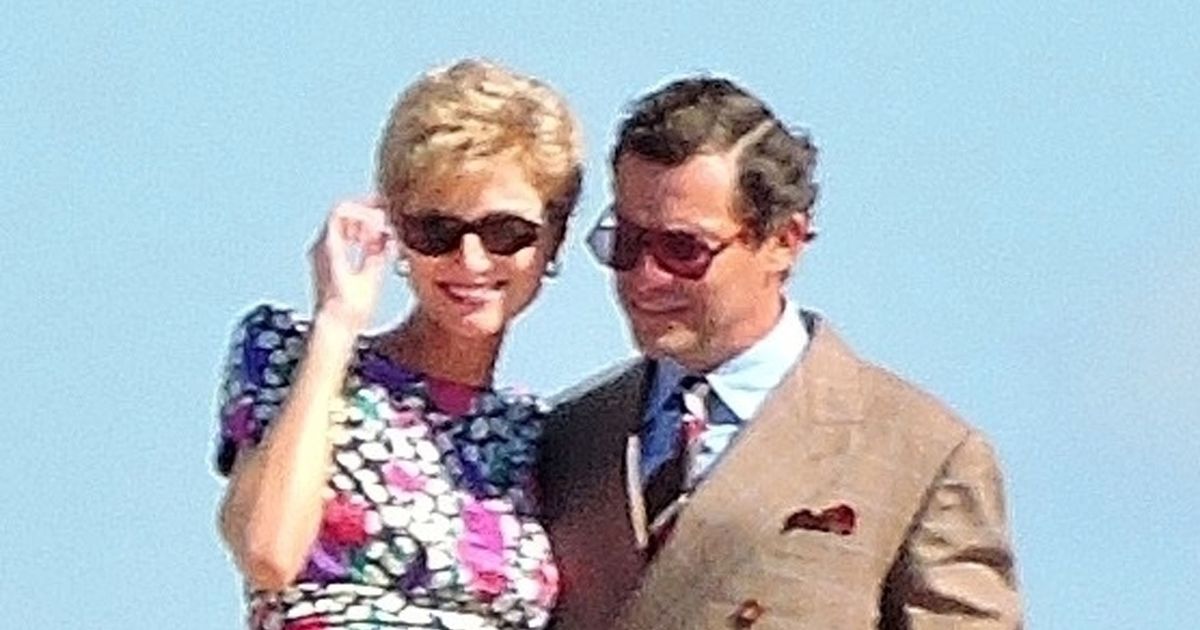 The Crown: Imelda Staunton on inheriting role of The Queen

Royal historians, experts and fans would be forgiven for thinking they’ve gone back in time as Dominic West and Elizabeth Debicki have been transformed into Prince Charles and Diana for season five of The Crown.

The duo have donned ‘90s clothes to recreate scenes of Charles and Diana as they enjoyed a holiday together to the Spanish island of Mallorca.

Season five of The Crown will chronicle rocky moments for Charles and Diana – who divorced in 1996 – with 51-year-old Dominic playing the Prince while 31-year-old Elizabeth is playing the late Princess.

Child actors Timothee Sambor, 11, and Teddy Hawley, seven, have also been spotted alongside Dominic and Elizabeth as they are playing Princes William and Harry in the hit Netflix show.

While The Crown has been slammed by royal experts over the years for getting facts and details about the family wrong – as well as for demonising certain members of the royal family – Charles, Diana, William and Harry did enjoy numerous trips to Spain in the past.

The actors were spied on the Christina O valletta yacht filming scenes for the new series in Palma de Mallorca on Monday.

Elizabeth channelled Diana as she took to the set wearing a short sleeved floral dress and stylish dark shades.

The Australian actress also had her hair styled in Diana’s infamously no-nonsense short hairstyle and looked to have mastered her regal hand waving skills as she shot scenes on the deck of the boat.

While Dominic made a convincing young Prince Charles with his hair expertly quaffed and wearing a sensible suit – complete with colourful tie and pocket square.

During one of the happier family trips while still married, they met with the Spanish royals, King Juan Carlos and Queen Sofía on their yacht where they watched the Copa del Rey regatta.

The parents also took William and Harry to play at Marineland waterpark during one of their trips.

Charles, Diana, William and Harry enjoyed family holidays together in Mallorca in the ’80s and 90s
(

Local reports in Mallorca suggest that season five of The Crown will include the collapse of Charles and Diana’s marriage – as there are reports that Elizabeth has filmed scenes on the island suspected of being set following their 1996 divorce.

Majorca Daily Bulletin reports: “The announcement that The Crown will be filming part of Series 5 on the island, with Prince Charles and Princess Diana being the central theme, will jog memories of Diana’s last visit to Mallorca in November 1996.

“It was an unexpected visit. The first news that we received of her visit was when we got an anonymous tip saying that she would be arriving that day on a schedule flight from Heathrow.

“She would be staying at the Hotel La Residencia in Deya, which in those days was owned by her close friend, Sir Richard Branson.

“Princess Diana arrived on the schedule flight from Heathrow walked through Palma airport… and boarded a private taxi which took her to Deya. She was travelling with a friend. She spent three days at the Hotel.

“There were rumours that she would be joined by Dodi Al Fayed. It was even said that she was planning to buy a house on the island. But nothing. In the three days she never left the hotel. Why she came to Majorca in November in 1996 remains a mystery.”

Princess Diana’s life was cut short just a year after her final trip to Mallorca.

Both Diana and Dodi Al Fayed died in a car accident in Paris in August 1997 – with the Princess just 36-years-old when she died in the accident, while Dodi was 42.