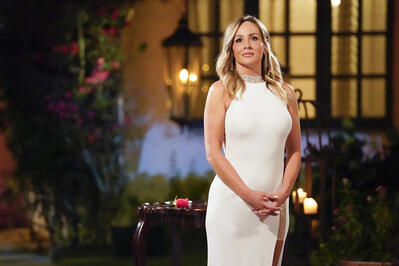 [Warning: The following contains spoilers for Thursday’s episode of The Bachelorette. Read at your own risk!]

It seems truly insane to be writing about The Bachelorette with, well, everything going on, but then again, what doesn’t feel insane right now? At least for two hours on Thursday, things seemed crystal clear in Bachelor Nation: However you feel about Clare Crawley as the Bachelorette, it is extremely obvious that she only has eyes for Dale and these shenanigans are over. She’s found the guy she wants! Let’s wrap up what we’ve known was going to happen since the beginning and move on to the next portion of the proceedings, okay?

I’m sorry to be the one to tell you but, it takes a full hour and a half to put the Clare and Dale love story to bed. The Bachelorette/Bachelor has been known to stretch for time, but this is really pushing the boundaries of what I can and cannot handle at the moment.

It’s the morning after the group date in which Clare refused to hand out a rose, and the guys are still steaming. They’re frustrated and confused as to what’s going on with their maybe-wife. “What am I doing here?” Boy Band Manager Kenny asks. I don’t know, Kenny. That’s a very personal question that only you can answer for yourself.

Meanwhile, Clare’s over in her suite journaling or maybe doing a word search when Chris Harrison arrives for a “serious, honest” talk. “Just you and me” he tells her. But also the camera crew and eventually all of America. He tells her how the guys are feeling and needs to know where she’s at. Clare’s never been one to hide her feelings — it’s why we’re in this situation in the first place — and tells Chris immediately: She’s “head over heels for Dale.” But Chris needs more info. He’s speaking for all of Bachelor Nation, after all. Did Clare and Dale connect before the show started? He even drops a hard “f” for good measure. A hard “f”! Chris Harrison! At the La Quinta! Clare tells Chris that she and Dale had zero contact prior to filming and swears on her father’s grave, a sentiment that I’m sure will wake me up in the middle of the night two months from now. Clare does, however, admit to stalking Dale on Instagram and developing real feelings for him just from his posts, and honestly friends, who among us has not?

Anyway, the gist of the whole thing is that Clare came here to find the love of her life and she thinks she’s done that with Dale. It makes Chris Harrison cry a little. Chris Harrison is really having a journey this season. The next step is for Clare to tell Dale how she feels and see if he reciprocates. The show tries to imply there’s a chance he doesn’t and this is a really scary step for Clare to take, but we are not fooled, show. “In your mind right now, is this over?” Chris asks. When Clare tells him yes, Chris delivers the line the promos have been playing on repeat: “Congratulations, you’ve just blown up The Bachelorette.” Like I said, this man’s on a journey and we’re all just along for the ride.

So, Chris has to tell the guys that their cocktail party and rose ceremony are canceled for the evening, but he gives them no further information and they just have to deal with it because this show loves to pour gasoline on fire. He pulls Dale aside to give him the news: Clare wants to spend the evening with him. Dale says he’s confused as to what’s going on, but no one is buying it.

The date goes exactly as Clare hoped: She barfs up all of her feelings for Dale and he receives those feelings. She’s falling in love with him, he’s falling in love with her, Clare talks about how her dad proposed to her mom after three weeks and only meeting her once, and that story is both wild and also explains a lot. After sitting at a table but not eating dinner, Clare and Dale happen upon a private concert by Chris and Bri from Listen to Your Heart. Okay, it’s less a private concert and more Chris and Bri singing into microphones while also watching Clare and Dale make out. There’s only four of them, and it is very uncomfortable. Finally, Clare brings Dale home with her.

The next morning begins with a shot of Clare’s dogs strewn about the sofa, and they look like they have seen some things. Clare and Dale canoodle in bed: Clare is still ready to spend the rest of her life with Dale. Dale also seems into it, I guess? But there is one major obstacle; What do they do now, Clare wonders, since technically she has 16 other boyfriends. Dale leaves to process or whatever and Chris shows up at Clare’s ready to get them dirty deets. Clare’s sure about her feelings and she’s sure about Dale’s feelings. This is it. But instead of just letting the happy couple who (maybe) just met, I don’t know, less than two weeks ago, ride off into the sunset to see what happens, this show demands a sacrifice — excuse me — a proposal. Chris Harrison is pushing this proposal on Clare and Dale so hard; he’s like that person at a wedding who won’t stop clinking their glass to get the newlyweds to kiss. It’s like, cool your jets Grandma, we know they’re in love. I don’t need to watch them smash faces while I try to eat my wet salad in peace, you know? WE GET IT.

Before any proposing happens, however, Clare has to let down her other boyfriends. When she tells them she’s fallen for Dale and it’s over, only Kenny really fights back: He wants an apology for having his time wasted and honestly, who cares at this point, maybe? Clare won’t apologize for love, guys! And that’s a fact. The only thing productive about this group break-up is that Ivan finally gets the spotlight for a hot second and is seemingly kind and thoughtful and also very cute, you know, should any future Bachelorette need to know that information.

Back to the proposal: Again, the show tries to create some tension by having Clare “start” to “freak out” about maybe pushing Dale into too much too soon (LOL, now she’s worried about that?), and her old fears of being left by men are rearing their ugly heads. On proposal night, Chris Harrison tries to do a little fake out and comes to see Clare as she’s waiting in the proposal spot, as if he’s going to tell her Dale’s not coming. Instead, he tells her he’s proud of her. It’s extremely not cool, Chris. Plus, we all know Dale’s going to show up and propose. And he does. And Clare says yes. And these two get their happy ending, which in 2020 means they get released from their quarantine bubble. Ah, love.

Now, let’s get into the part everyone’s been wondering about: How will this Bachelorette switcheroo work? The day after Clare and Dale get engaged, Chris goes to see the other men, who are still in the dark about what’s going on. They’re getting very emotional about it! He fills them in on what happened and tells them that if they’d like to stay, their journey on this show will continue. They have until that night to decide. Chris tells them that it’s understandable if they might want to leave should they be over the whole thing and/or still nursing some feelings for Clare. None of the other guys really had much time with her, with the exception of Jason, who unfortunately had to endure a therapy session dressed up as a one-on-one date in which he bared his soul to Clare and also to some desert rocks. In the end, they all decide to stay and seem excited to get a clean slate and an equal playing field, and some extra time at the La Quinta Resort, I’m guessing.

And then comes the moment we’ve been waiting for: Tayshia Adams, our new Bachelorette, steps out of the limo, ready to find love. She’s excited but also nervous that the men might not accept her since they were originally here for Clare. Chris Harrison reassures her and then tells her that “in the next 10 seconds [she] could meet [her] husband” before he leads her to the room where the men are waiting, and the show cuts to black. No pressure or anything.

The Bachelorette airs Tuesdays at 8/7c on ABC.