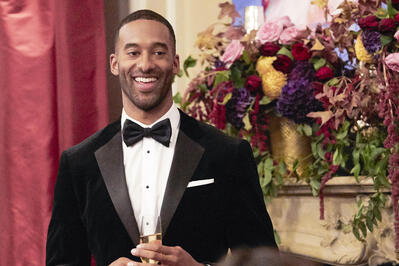 [Warning: The following contains spoilers for the Season 25 premiere of The Bachelor. Read at your own risk!]

No, it’s not a mistake. It’s been just two weeks (two!) since Tayshia and Zac rode off into the Palm Springs desert in a cardboard NYC taxi after finding love at the La Quinta Resort and putting a ring on it. You’re probably still vigorously stalking their Instagram accounts for any breadcrumbs as to how their relationship is going (by you I mean me, definitely, and it seems like they’re very happy). But who cares! It’s already time to make some room in your heart for a new singleton looking for love on a reality TV show. Matt James has arrived, and the 25th season (save our souls) of The Bachelor has begun.

Let’s talk about Matt James, okay? First of all: This! Man! Is! So! Tall! Just the tallest. The pandemic has been going on for what feels like 700 years, so let us bask in the places we find joy. Especially the tall ones. Unlike previous seasons, Matt is the Bachelor without ever having been a contestant on The Bachelorette. How did they find this tall man, you ask? They don’t mention it in the episode, but you may recognize Matt from such things as Being Best Friends with Tyler C. from Hannah Brown’s Bachelorette Season. Or Tyler C.’s Instagram Account. Also, that picture of Matt and Tyler C. in which Matt’s eating a sandwich and Tyler C. is holding a pecan pie over his junk. You know the one. Matt was originally cast as a contestant for Clare Crawley’s Bachelorette season, but he was just so good they handed him the lead. As Chris Harrison says, “When you know, you know.” It should be a nice spin on things: Matt’s just as new to all of this as the 32 women he’s meeting are, and we get to know him without having other Bachelor franchise baggage to inform our opinions.

The Bachelorette Finale Recap: Tayshia Gets Her Rom-Com Ending

And so, reality-TV-baggage free, the 28-year-old real estate broker Matt James is flown into Nemacolin, a luxury resort an hour or so outside of Pittsburgh. Friends, this might be another quarantine season, but we aren’t in the La Quinta anymore. This place is sprawling, and no offense to the desert — which served up some very sincere moments that revived my weary soul — but I’m so happy to not be staring at the desert. Let us hope no one goes on a scooter date here. Already, the new locale means Matt can be in a turtleneck and not sweat within an inch of his life. On a related note, it’s great to see that the turtleneck trend has transitioned from The Bachelorette Season 16 to our current circumstances. Are turtlenecks the new v-necks? We should discuss that at some point.

Matt has his mom there with him, and she seems great. She raised her two sons on her own, and all she wants is for Matt to open up and break down walls and be vulnerable, yadda, yadda. They are very cute! Matt keeps saying his biggest relationship hurdle has been his fear of being vulnerable with someone, of letting someone in, but he seems ready, willing, and able to open up here.

As they get Matt situated outside the Chateau at Nemacolin ahead of the limo arrivals, he asks if he can have a little chat with Chris Harrison to get some pointers and hash out his feelings. He’s very open about the pressure he feels being the first Black Bachelor, how being biracial has shaped him, and how his parents splitting up when he was young still affects his relationships today. He’s never been able to tell a woman he loves her, but he’s ready to start a new chapter in his life. He’s ready to let love in, guys!

Also, we saw him do a lot of slider exercises, so he’s probably feeling right and tight at the moment.

Anyway, he can’t postpone this thing he signed up for any longer: It’s time for the limo arrivals! Matt will be meeting 32 eligible women this evening, and the guy is so nervous. Did anyone expect him to be this nervous? As is tradition, we get a bunch of normal meet-and-greets in which the ladies tell Matt they are ready for this journey before we get into the shenanigans. Hey, listen, there are 32 women all vying for Matt’s attention; you have to stand out. If you think the way to do that is to show up in your lingerie and have Matt pick out a dress for you, or introduce Matt to your vibrator, or wear goat hooves for shoes, well… that’s just a decision a person has to make for themselves. Or, you know, you could just be like Khaylah from North Carolina, who drives up in a pickup truck to make Matt feel like he’s at home — later, during the cocktail party, she brings him out for some sweet tea in the back of the truck as they toast to their North Carolina roots. That’s very nice! And then you won’t have to worry about finding a good time to take your goat hooves off later!

Moving on: Let’s also give a shout out to Alana, who does a little riff on Lady and the Tramp with some noodles (no, she is not the one who asks Matt to taste her giant [meat]balls; that is unrelated!). This is not because of the introduction itself, but because the gimmick gives us the image of Matt James in a tux, holding a bowl of spaghetti at the bottom of a flight of red-carpeted stairs like some sort of Pasta Prince. Pasta Princes are the best kind of princes, everyone knows that.

But of course, the entrance that everyone will be talking about belongs to Victoria. She arrives wearing a tiara while being carried on a throne. She calls herself queen and Matt her king, and when she walks into the cocktail party she screams, “The queen has arrived, bitches!” and everyone thinks she’s hilarious and loves her. Just kidding, they all immediately hate her. It does not help things when during the cocktail party she steals Matt away from other women twice. And very quickly, Season 25 has bestowed its first villain edit.

The cocktail party isn’t all drama and sex toys, though. Matt is able to have some very earnest conversations with several of the women. This includes Bri, the first one out of the limo, who seems to have a very similar upbringing to Matt; Rachael, who has chemistry with Matt immediately; and, of course, Abigail. Abigail is deaf and has a cochlear implant and is very open about it with Matt. She talks about her close relationship with her older sister, who is also deaf, and how important her family is to her. Matt and Abigail get very giggly as they admit to how nervous they were meeting for the first time and Matt tells her that it was “hard to focus” because of how beautiful she is. Then he goes in for the kiss! The first makeout of the season is upon us. There’s no question about it: Abigail gets the First Impression Rose.

So what of the first Rose Ceremony? Well, there are still too many contestants to get fully attached, but Matt ends up cutting the group down from 32 to 24 — and yes, that group of 24 includes Queen Victoria as well as Bri, Rachael, Mari, Katie, Alana, and Khaylah, among others. So, so many others. There are two Serenas in the bunch! It’s a lot of people in sparkly gowns to keep track of! And, thanks to the sneak peek at the rest of the season, we now know that even more women will be arriving to duke it out for Matt’s heart. Also, tears. There will be tears. Nemacolin doesn’t know what hit it.

The Bachelor airs Mondays at 8/7c on ABC.