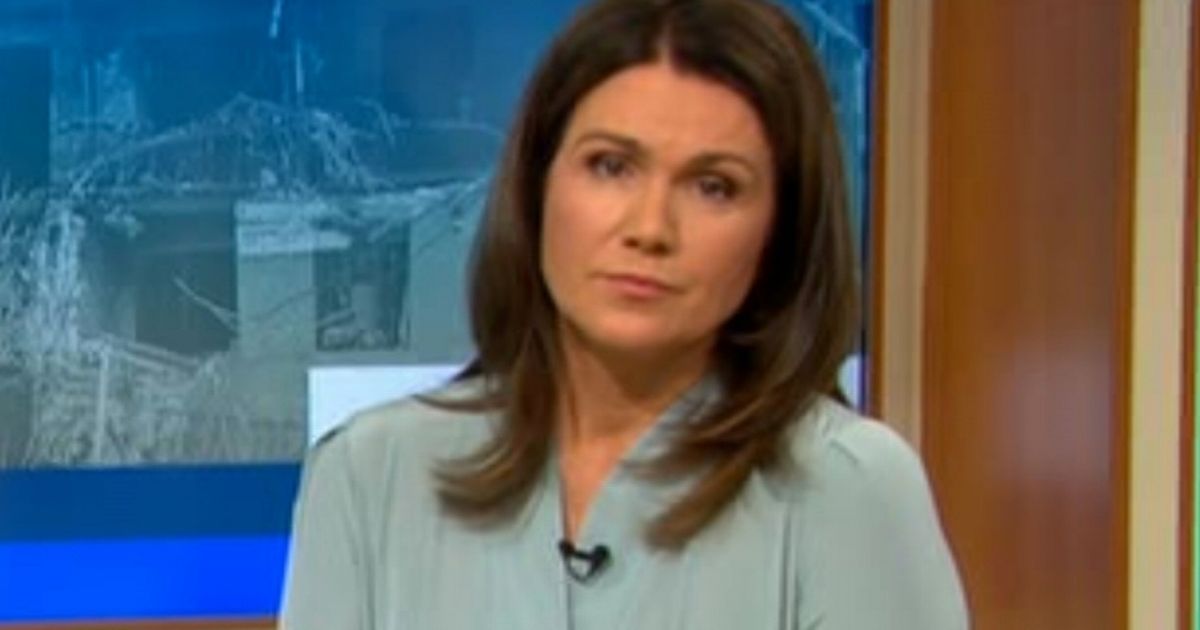 Good Morning Britain host Susanna Reid reached out to a guest on the show, who challenged the decision for NATO not to implement a no-fly zone over Ukraine amid the ongoing conflict with Russia

Susanna Reid said she felt “powerless” on Good Morning Britain on Monday, as a show guest made a desperate plea to UK Prime Minister Boris Johnson.

Olena Gnes pleaded with the UK government and NATO to permit a no-fly zone over Ukraine amid the devastating ongoing conflict with Russia.

With continued bomb blasts and attacks in the country, which have seen millions flee and thousands dead and injured, Susanna and co-host Richard Madeley spoke to regular guest and Ukrainian journalist Olena about the latest strikes in Kyiv.

She revealed she remained in the basement of an apartment building with her three young children, as their makeshift bomb shelter.

Susanna Reid said she felt “powerless” on Good Morning Britain on Monday, as a show guest made a desperate plea to UK Prime Minister Boris Johnson
(

But the latest bombing which hit a residential building in the capital was very near to her, she said, as she revealed she heard it strike.

As she detailed the fact people had remained in their homes as there were no “good” bomb shelters in her area, she pleaded to the UK government and countries across the world to help her and her country, “before it’s too late”.

She said, of how she is reassuring her children: “I’m trying my best to say we will be fine and there is still hope, and we will resist but I don’t know how to reassure them today.

“I just wanted to say this, I heard your military expert you’re talking to right now, and this reminded me, I’d like to quote Winston Churchill.

“Good Morning Britain, you all know Winston Churchill right? And this military expert and other politicians in the West, they remind me of a peacemaker who is feeding a crocodile hoping that the crocodile will eat him last.”

“If NATO countries do take on Russia, if they do impose a no-fly zone, that could escalate things to an unthinkable degree. That’s what they’re worried about.”

Susanna admitted she felt helpless as she heard Olena’s pleas
(

Olena responded: “Please tell me, was Ukraine escalating anything here to any certain degree? Was Ukraine dong anything special to make Putin angry or he just decided?

“I dunno what you guys need to do anything special to irritate him more or to escalate.”

“Why are you right now pretending it is not about you, it’s only about Ukraine? it’s not enough.”

Susanna admitted she felt helpless as she heard Olena’s pleas, and asked her what she would say to Prime Minister Boris Johnson.

The mother replied: “Please impose a no-fly zone right now and stop this before it gets too late, before the genocide is done in Ukraine, before I am killed, and my children and my husband.”

Susanna told her: “Olena I feel just totally powerless, I don’t know what say to you. You shouldn’t be in this situation protecting your baby and your children from what is happening.

“Your husband there taking up arms, we send you love and luck and applaud your courage, and thank you for being with us this morning.”

It comes as Ukrainian president Volodymyr Zelensky also pleaded with NATO once again to operate a no-fly zone over Ukraine as the conflict escalated.

GMB shared the clip of the president calling for the move, hoping the latest strikes across Ukraine may change their minds, as the conflict continues to devastate the country.