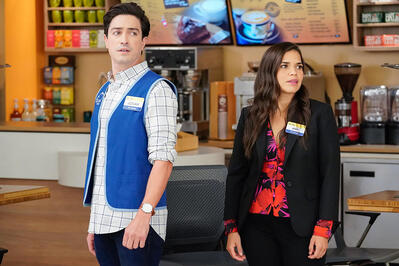 [Warning: The following contains spoilers for Thursday’s episode of Superstore, “California, Part 2.” Read at your own risk!]

It was never going to be easy to say goodbye to Amy Sosa, but America Ferrera’s final episode of Superstore really twisted the knife. Even Superstore is upsetting now. Haven’t we been through enough?

“California, Part 2” — which also marks the NBC sitcom’s 100th episode — picks up the story of Amy’s promotion to a corporate job in California, which was meant to be wrapped up in the Season 5 finale before production was shut down early. Now, after a Season 6 premiere focused on Cloud 9’s adjustment to the pandemic, Amy’s move to the West Coast is back on, and that means Jonah’s (Ben Feldman) is too. Cheyenne (Nichole Sakura) can see it now: “Jonah and Amy old as hell, just sitting on a porch, looking out at the Golden Gate, making out under the light of the Hollywood sign.” Brace yourself, Cheyenne.

Amy is feeling smothered lately, overwhelmed by the fact that Jonah is uprooting his life for her — and she’s pretty sure he’s going to propose. “I married Adam because I felt like I had to, and that was the wrong thing to do,” she tells Jonah, explaining her hesitation. “I just feel like this move is pushing us down this path, and I don’t think we’d be talking about marriage if I didn’t get this job.” Jonah, who was absolutely going to propose, gives her back the ring he took to get her ring size and slinks out of her office.

The problem with Amy’s sudden panic — which is interesting in the way that irrational freakouts usually are — is that the episode never finds a way to sell it as anything more than irrational. As Jonah later points out, they’ve been together for years. They’re already living together and raising a child together, and Jonah’s personality has been set up as the opposite of Adam’s from day one. Garrett (Colton Dunn) talks some sense to Amy, pointing out that she can’t really be surprised that the same guy who put stars on a ceiling for her wants to marry her. But when it’s time to bring it home, he whiffs: “I’m sure you’ll figure it out. I’m gonna play this game.” Great pep talk.

Amy tries to make it right with Jonah, but when she attempts to prove she’s excited about their future, the best she can offer him is a pair of aqua socks. Jonah asks point blank if she wants to marry him (“I’m not proposing to you; I’m asking a question”), and after some hedging, Amy finally says no. She wants to do long distance, but Jonah isn’t in this halfway. “When we first met,” he says, “you told me that all your days felt the same and you felt trapped. And I don’t want to be the reason that you feel like that again.” So this is the way Amy and Jonah’s relationship ends: not with a bang, but with a pair of — to quote Sandra (Kaliko Kauahi) — “f—ing aqua socks.”

It’s a sad scene, and Ferrera and Feldman give it real weight. The plot of this episode just never transcends the fact that it’s being dictated by necessity: Ferrera is leaving the show, and Feldman isn’t. To be clear, I’m glad we’re not losing him too. But the episode twists itself in knots in a way that fails to do justice to Amy and Jonah’s relationship while also letting that relationship overshadow Amy’s dynamic with everyone else. As cute as Amy and Jonah are, Superstore is a familial love story between a group of coworkers. Garrett should care about Amy more than he cares about a game on his phone.

There’s still a lot of heart in Amy’s sendoff, which also features a farewell slideshow that poor Glenn (Mark McKinney) really can’t make sense of, but Amy’s sweet exchanges with Glenn, Mateo (Nico Santos), and Dina (Lauren Ash) could use more room to breathe. And when none of their friends — except Sandra — seem all that upset by Amy and Jonah’s breakup, it has the weird effect of making it seem like they aren’t such good friends after all. Talking to Dina about the breakup, Amy says, it “feels pretty bad, but also not wrong.” But it feels a little bit wrong to me.