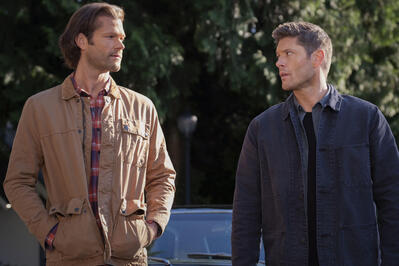 [Warning: The following contains spoilers for the series finale of Supernatural. Read at your own risk!]

I’m just going to come right out and say it: the Supernatural series finale read like the epilogue to Harry Potter and the Deathly Hallows. You know, the one that was entirely unnecessary and had an “unfortunately trite fanfiction” vibe? On one hand, I want to wallow in the inherent bitterness that comes with being a highly opinionated Supernatural fan who has not gotten her way. On the other hand, my significant other walked in as the credits rolled and asked how my “religious experience” went and when I shrugged and went “Ehhhh?” he took it upon himself to defend the show’s honor with, “They gave you 15 seasons. What else do you want?”

That’s fair because this cast and crew gave us 15 seasons. And that is insane. Furthermore, there is so much within those 15 seasons that is fantastic and innovative and that the retrospective that aired prior to the actual finale deservedly celebrated. This show has so much to be proud of, and I’m not even going to go as far as to say that “Carry On” is not one of those things. It had its moments.

It’s just not my cuppa.

Dean Winchester’s (Jensen Ackles) final death scene was one of the greatest death scenes in a series that has turned death scenes into an art form. I loved that it was a stupid accident that happened on a random, largely forgettable hunt. I loved that there were foreheads touching and “I love yous” and man-tears and promises not to bring anyone back from the dead because that always goes wrong. Finally, someone said it! But his is the point of the episode at which the klaxxon started going off in my head as I realized we still had about 30 minutes left and…oh no. Don’t do it, Supernatural…They did it.

Let’s take a moment to acknowledge what an odd episode “Carry On” is in that it goes against so much of the show’s own messaging. Way back in 2005, in those heady days before iPhones, Snapchat and, frankly, before some of Supernatural‘s current audience may have even been born, we were introduced to Sam Winchester (Jared Padalecki) who had run away from his freaky hunter family to have a normal life. It’s implied that this was a traumatic event for his family, and well into Supernatural‘s run, “Sam runs away to college” is still bandied about as the Ultimate Betrayal in Winchester mythology. Dean showed up at Sam’s door and dragged him back into that life, setting everyone down the road to literal Hell, but 15 seasons later, we see that the brothers have adapted and seem to finally be content. They have a dog. They go to silly festivals. They’re at peace and they actually didn’t even have to die this time to get it.

Then Dean dies and Sam…runs off and gets married and has a kid named Dean *eyeroll* and gets to have the blissfully normal life he always wanted and was on track to have until Dean showed up at Stanford and ruined everything. To be fair, Supernatural gave us hints that this isn’t entirely what Sam’s post-Dean life was. He answered one of Dean’s cell phones to play FBI agent. The house that we see him raising his family in and finally dying in as an old man is practically a reproduction of the “Bobby’s house” set. We see that his grown son has an anti-possession tattoo. Sam’s main love interest this season has been Eileen (Shoshannah Stern), a fellow hunter and while she did not make an appearance herself, the actor who plays Sam’s son shares her oval face and dark hair, which may have been a deliberate casting decision.

Sam as the patriarch of his own little hunter family is something I can get behind and I think that the implication in Jack’s (Alexander Calvert) new world is that the supernatural threats are relatively few, relatively manageable, and nowhere near the repeated apocalyptic meltdowns that Dean and Sam dealt with was a clever way to make that “best of both worlds” situation more plausible than it had ever been for previous hunter generations.

There’s just something about that happening as a result of Dean’s death that feels a little unfair to Dean though. Look at it this way: Sam Winchester ran away from his family to have a normal life. His brother showed up and dragged him back in, and Sam toiled there in that life he never wanted for 15 seasons.  Then his brother died and Sam was finally free to have the life he tried to live a decade and a half earlier before he was interrupted.

I’ve been put into an odd place by the finale, as I’ve been an advocate for Sam-and-Dean becoming less self-destructively co-dependent since the whole Gadreel thing, and now I’ve actually gotten that and I don’t love it. Be careful what you wish for, indeed. Still, I’m not here to tear apart what was clearly meant to be a love letter to these two long-suffering legends. I may not be thrilled by where we ended up, but the trip has been incredible.

This is a time for celebration and for thank yous. Thank you for one more topless Jared Padalecki scene. Thank you for that haunting cover of “Carry on my Wayward Son” by Neoni. Thank you for Sam wearing glasses. Thank you for that good doggo, yes he is. Thank you for letting Dean get ALL the pie before he was impaled. He earned that pie. And thank you for the weekly reminder that “family don’t end with blood,” which has become so much more than a line from a ten-year-old episode and has come to define this series, it’s cast and crew, and it’s fans. You are beautiful and terrifying and I adore you to pieces.

The first 14 seasons of Supernatural are now streaming on Netflix.