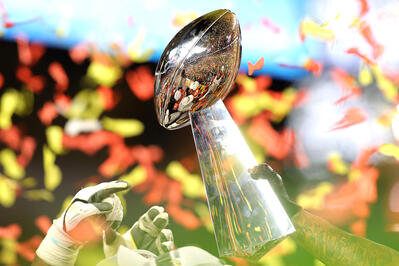 One thing that’s been keeping a lot of people going through the hazy time loop that is 2020 is looking forward to the biggest football game of the year: the Super Bowl. Super Bowl Sunday is all about primo snacks that usually lead to a food coma and enjoying quality couch time. This year should be no different. Here’s what we know about the Big Game so far.

The halftime show is still a big draw. Right now, The Weeknd is the only artist who has been announced for the halftime show but you can expect more names to be added to the show as we get closer to game day. The Super Bowl worldwide TV audience guarantees artists the kind of exposure they can’t really get anywhere else. Because of Covid-19 measures, the musical segments may take place at another location but no specifics about performances have been announced yet.

Which network will air Super Bowl 55? CBS will air the big game nationally. ESPN Deportes will air a Spanish-language broadcast. In the United Kingdom and Ireland, the game is going to be televised on the free-to-air channel BBC One.

Are any new shows premiering after the game? Yes, because with a huge worldwide audience, CBS will seize the opportunity to premiere The Equalizer, the new incarnation of the classic TV show, this time starring Queen Latifah. The Late Show with Stephen Colbert and The Late Late Show with James Corden will also air new Sunday night special episodes on both January 24 (after the AFC Championship game) and February 7.