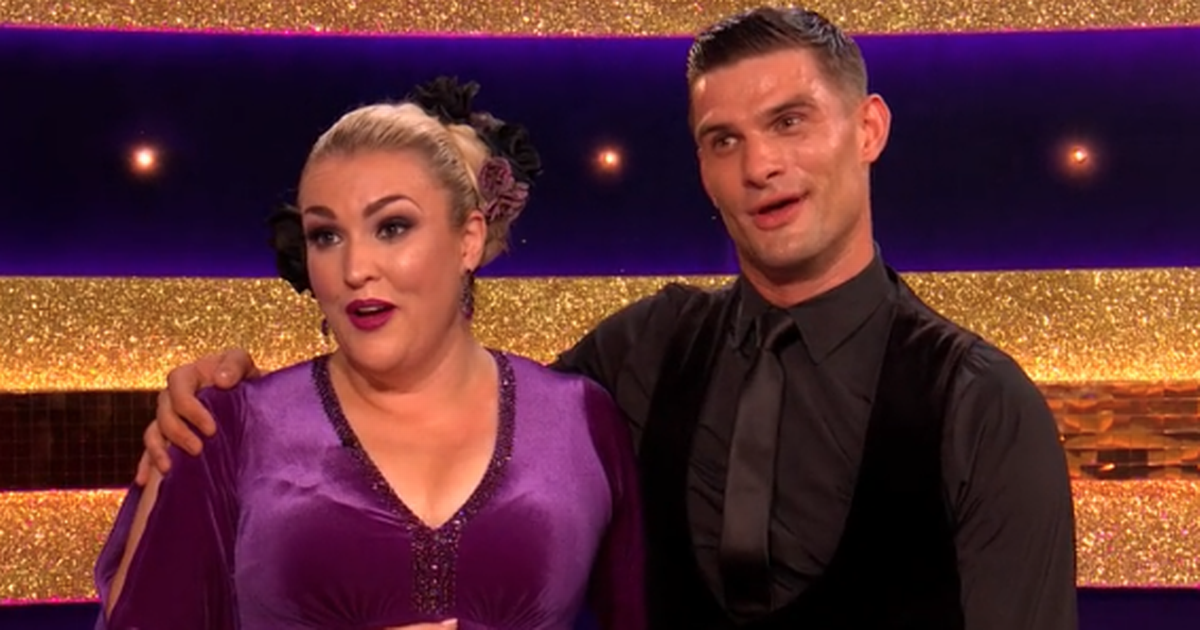 Strictly Come Dancing star Sara Davies has an intense bond with professional partner Aljaž Škorjanec, who has become part of the family and even moved house to be near her

But that’s what happened with her professional dancing partner Aljaž Škorjanec, with whom she has had huge highs including topping the leaderboard with their foxtrot, and crushing lows such as landing in the bottom in the first week with their cha cha cha.

But their success is helped by a willingness to compromise in their busy lives, with Aljaž, who won Strictly in 2013 with Abbey Clancy, moving to be nearer to Sara.

The entrepreneur lives in the North East with her husband Simon and their two young sons, and so Aljaž made the move to as not to disrupt her life too much with travelling to gruelling rehearsals.

Sara and Aljaž meet every morning at 6am for training, allowing Sara to still focus on her company, Crafter’s Companion, and family life.

And Aljaž has fitted into 37-year-old Sara’s family perfectly, she told Teesside Live, with her sons calling him their “new best friend”.

“At first the kids saw Strictly as taking me away from home but Aljaž said to me ‘what can I do to help?’ We start early, 6am meet and train so we don’t have to compromise,” said Sara.

“The kids now think it is awesome, they’ve got a new friend. One of the kids wanted to re-watch the launch show at 5.30am the other morning so they could watch Aljaž. He had his hair slicked back on Saturday night and they wanted the same style – it melts my heart.

“He has embraced my family life, he gets on with my husband like a house on fire. I feel like I’m having my cake and eating it, I’m living my best life.”

Meanwhile, Aljaž is settling into life in the North East well, revealing it actually reminds him of his home community back in Slovenia because everyone is so supportive of their neighbours there, too.

Sara recently told Closer magazine: “After training [Aljaž] comes and does the school run with me, which the kids think is amazing, and the teachers think is even more amazing!

“The kids think it’s the coolest think in the world. We come home and he spoils them rotten. My eldest is really into his football cards so he’s been buying those for him.

“He’s really thoughtful, it’s little things like he’ll say, ‘you go and put the kids to bed and I’ll have a beer with your husband’. He’s just been asking the right questions and putting my husband at ease.”

Aljaž has been more than happy to lend his support to Sara, as he believes professional dancers on the show should be prepared to immerse themselves in their partner’s family life.

He added: “Sara and her family are beautiful. The way I see it is whoever does Strictly, their whole family does it, too.

“Sara is obviously this incredible mum and wife, she’s not going to be at home as much because of the training, so I am fully aware that her whole family is part of the show.

“They are all supporting her a million per cent, but if we are all in this little team together you’re stronger.

“Apart from teaching Sara, who has been the most beautiful student, that has been one of the highlights – spending so much time with her family after rehearsals, I love it!”

Last Saturday, Aljaž was over the moon when host Tess Daly told him his Tango with Sara was his highest-scoring ever in the nine years he has been on the show.

“Aljaž, that is your highest Tango score the whole time you’ve been on Strictly Come Dancing,” she said.

“It took me nine years to get four nines for a Tango. Get in!” gushed a delighted Aljaž.

Aljaž’s previous highest score for the tango was a 35 which he scored in his first series with Abbey, and with those two winning that series, this could be a great sign for him and Sara.

Janette departed the show this year to host It Takes Two instead.

Speaking to Claudia Winkleman following their stellar performance, Aljaž revealed he loved living with Sara and her family.

Claudia told him: “Aljaž, you are now a full member of the family!”

“Absolutely, I’ve pretty much decided to change my last name, because I think Davies is much easier than Škorjanec,” joked the dancer.

“And I love the whole family, I actually feel like I am doing Strictly not just with Sara, but with the whole of the Davies family.

“They have been so lovely and I can’t wait to go back next week, hopefully.”

* Strictly Come Dancing continues on Saturday evening on BBC One