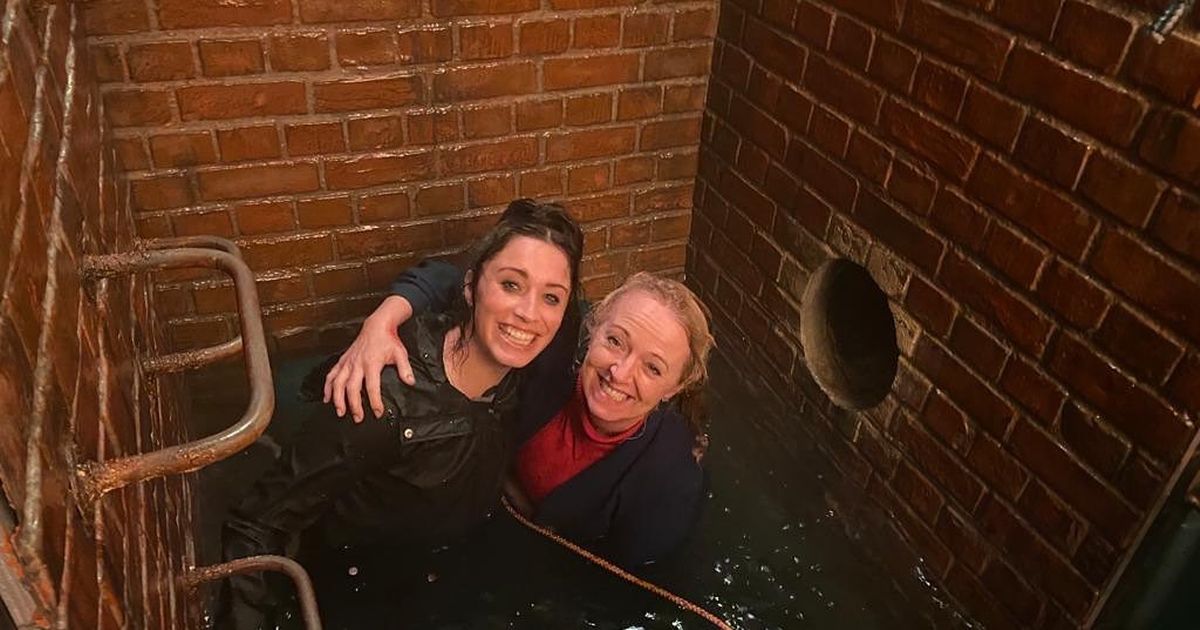 Julia Goulding and Sally Ann Matthews have given Coronation Street fans a glimpse behind the scenes of filming the ITV soap’s recent dramatic scenes.

Sally, who plays Jenny Bradley on the long-running soap, was in tears on screen on Friday night, as her character’s ex Johnny Connor lost his life drowning in a sink hole.

In real life, the actress was all smiles as she brought Corrie’s recent storyline to life – even breaking character to enjoy a spot of vollyball in the giant water tank the dramatic scenes were filmed in.

Taking to Instagram on Friday, Sally shared a fun video of herself and colleagues larking about off-camera with a multi-coloured beach ball.

“We grafted let me tell ya,” the actress began her caption to her 86,300 Instagram followers.

“It truly was one of the best experiences of my professional life. Months and months of preparation from every department at @coronationstreet and then we got to have the best six days ever x.”

Julia, who has played Shona Ramsey on the ITV soap opera since 2016, also shared a similar memory over on her Instagram account.

Pictured leaping for the make-shift volleyball in the water, the star wrote: “We did have fun between scenes though… storm drain water volley ball anyone?”

Fans and fellow soap stars loved the footage from the Corrie stars, after a week of tense scenes on the famous cobbled street.

ITV viewers were left devastated on Friday night as businessman Johnny lost his life in the dramatic conclusion to Super Soap Week.

Between filming the tense scenes, the stars enjoyed a spot of volleyball
(

Johnny, portrayed on-screen by Richard Hawley, managed to save Jenny after she fell victim to the fatal sinkhole.

Once his ex-wife had reached safety, Johnny struggled to help himself and he passed out.

After realising something was wrong, Jenny screamed: “Johnny say something – are you OK?”

“Johnny listen to me, they’re here. They’re going to be with you soon. You don’t have to talk to me but look at me.”

Sadly it was too late, and in one heart-breaking scene, tragic Johnny begins to hear the voice of his late son Aidan calling out to him.

Once she realised her ex-husband was in serious trouble, Jenny shouted: “Johnny please you just need to hold on. I love you.”

Johnny managed to tell his ex he loved her too, before slipping under the water and passing away.

Coronation Street viewers are in for more drama next week, as the fallout from the businessman’s death sparks even more tragedy.