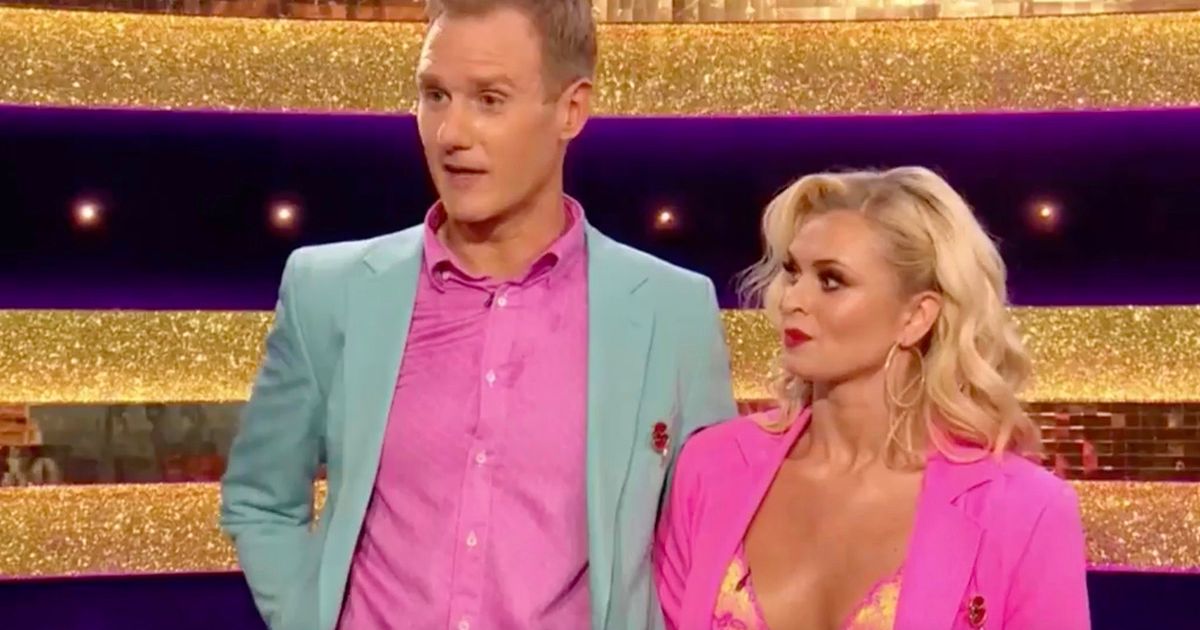 The BBC Breakfast presenter’s dance didn’t go down well with the judges, and it seems that he can’t sit down well either after gruelling training sessions damaged of his buttocks

Strictly: Dan Walker walks off as he receives his scores

Dan Walker admitted that training for this week’s Strictly dance had left one of his bum cheeks bald and held together with tape.

The BBC Breakfast presenter made the intimate confession as he and pro partner Nadiya Bychkova spoke to Claudia Winkelman after their Couple’s Choice performance.

The pair looked jaunty in matching neon pink and baby blue outfits – but it wasn’t enough to detract from their messy timing.

While they were praised by the judging panel for making them smile, they did deliver some criticism, especially about Dan’s form.

Catching up with Claudia, Dan explained that performing lifts had crippled one of his buttocks.

He said: “My right bum cheek has suffered this week. I have about three metres of physio tape on it. There’s no hair left on there either.”

Dan then glanced at Nadiya to see if he had revealed “too much”, which she agreed with.

Claudia also thought his rump revelations were a tad too much for the teatime show and scolded him.

She said: “I think there is a line and we bounced right over it.”

The judges however were less apologetic about their mixed bag of scores, and the couple scored a lacklustre 28 out of 40 for their dance.

Claudia Winkelman told him that he had “bounced over the line”
(

Shirley Ballas gave them an 8, but the other judges were not as generous.

It seems many people watching at home are also not feeling Dan’s moves.

“Were there actually any proper dance moves there? Just seemed like a succession of finger points, toe taps and giant strides.

“I didn’t even get anything from his face as most of the time he was staring at the floor or Nadiya. 4.”

Shirley Ballas gave them an 8, their highest score
(

However, others say that he is the “true embodiment of Strictly” due to having never danced in his life before.

One tweeted: “For those saying Dan is awful and deserves to leave the show, let it go. So what if Dan isn’t the best dancer on the show, he is the embodiment of Strictly: someone who has never danced before learning.”