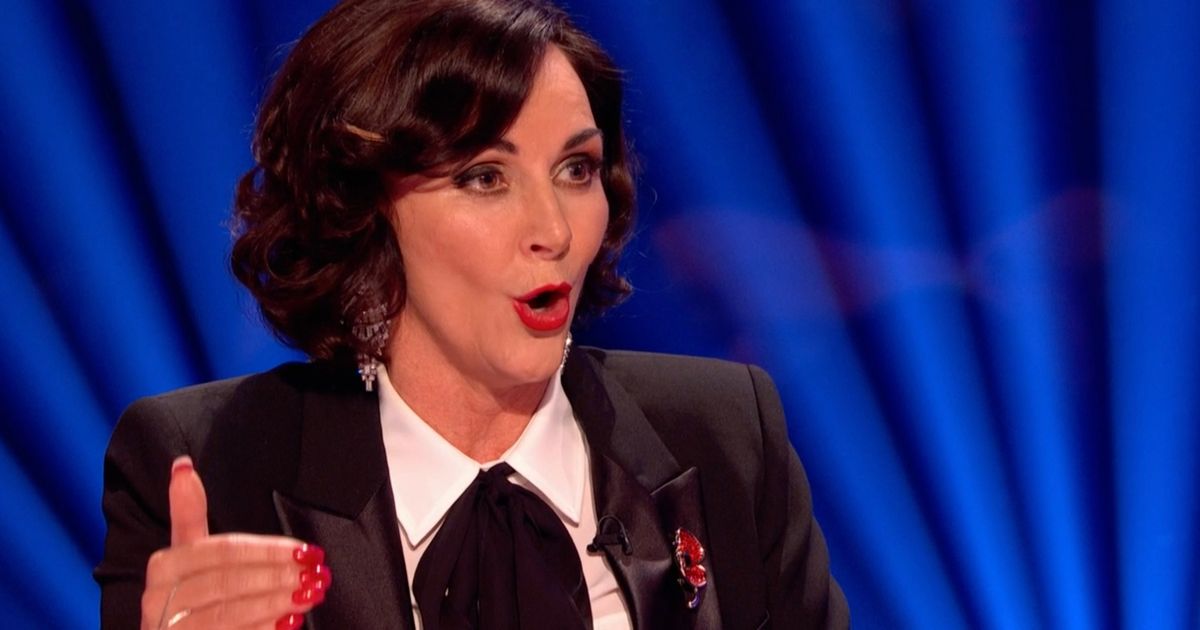 Last week TV fans could breathe a sigh of relief as Strictly finally hit our screens again in all its glittery glamour.

The show did not disappoint in a spectacular return to form, with 15 all-star contestants including Greg Wise, Katie McGlynn, Nina Wadia and Adam Peaty.

Never a dull moment on or off the dance floor, fans have already seen Tom Fletcher and Amy Dowden forced to temporarily withdraw after testing positive for Covid in week one.

While tempers flared in the very first episode as head judge Shirley Ballas wound up in a frosty exchange with the show’s hosts after telling actor Greg Wise he had charisma, but none of the “fundamentals”.

Presenter Tess Daly commented: “Shirley’s being very tough tonight. It is only Week One. Personally, I’m loving this partnership.”

Claudia later commented: “I don’t even know what a fundamental is but let’s all get some.”

The exchange gave fans an early indication of how far the judges are willing to go in their quest for ballroom perfection.

And it’s by no means the worst spat the show has seen in its epic 18 series run.

Over the years fans have watched name-calling, catty comments from judges and rifts between celebs and pros – here are some of the worst Strictly bust-ups.

Saturday’s spat was not Shirley’s first frosty exchange on Strictly, after she spoke last year of how fellow judge Craig Revel Horwood reportedly body-shamed her in 2018.

Shirley said Craig sent her flowers and apologised for telling a crowd her breasts were “hanging out” when she auditioned to replace Len Goodman.

Shirley described her shock and sadness at the incident in her autobiography Behind The Sequins.

She said: “It was awful and very, very painful. It brought up a lot of things from my past that I thought I’d dealt with.

“Once again, I was propelled back to my toughest days with [ex-husband] Corky, when he would make comments about my appearance: my crooked teeth, my nose, my a**e that was too big.

“All those insults just came flying back as I read what Craig had said, apparently in jest. I told him exactly how I felt.”

Despite the upset caused, Craig and Shirley are said to have buried the hatchet after he made a heartfelt personal apology.

Len said: “The old ‘keep up, turn up and shut up’ was a throwaway line.”

Animosity bubbled up between Will Young and Len Goodman in 2016, when the former head judge criticised his dancing and told the singer to “show up, keep up and shut up”.

Fans were left stunned after Will and his partner Karen showed early promise of becoming series winners.

Len later opened up about the incident, saying: “The old ‘keep up, turn up and shut up’ was a throwaway line.

“I chatted to him afterwards and said, ‘I was only larking about, Will’, and he said, ‘I know that.’

“Then, suddenly, he’s not doing Strictly any more. I thought, ‘Oh, Christ, I do hope it’s not because of me’.”

The pair did reportedly make amends at a Manchester hotel during the Strictly tour, when The Sun noted they shook hands and were spotted laughing together.

Craig Revel Horwood was at the centre of another row when he made comments about Ola Jordan’s raunchy shots in a Christmas calendar in 2015.

The judge complained that Strictly is a “family show” and the pictures of Ola “pouring milk all over herself with her legs spread” were inappropriate.

Ola’s husband James Jordan did not take too kindly to criticism and branded Craig “vile”.

He also said the judge was promoting “double standards” when comparing the calendar to Craig’s autobiography All Balls And Glitter: My Life.

James said: “How can he say it’s not okay to sell a sexy Christmas calendar but it is okay to sell his own book telling the world he was a drunken rent boy, and call it All Balls and Glitter?

“Innuendo, anyone? Is that what a ‘family show’ is all about, Craig?” he asked.

James also hit out at the show for failing to give Ola and the other professional dancers a fair deal when they work “flipping hard” for up to 14 hours a day.

The thirteenth series of Strictly in 2015 proved to be Ola’s last as she announced she would not be returning shortly after she was the first to be eliminated that year with Olympic medallist Iwan Thomas.

James Jordan seemed to be someone who was not afraid to ruffle feathers on the series.

When Craig told One Show presenter Alex Jones she was “sexless, cold and stiff” in 2011, her professional partner James did not hold back.

The outspoken star insisted that the British public would have enjoyed the dance.

Len Goodman retorted “We are here and we spend a lifetime watching and teaching and judging dancing. Our criteria are different to the public.”

Addressing the drama later, James complained:“It would be nice if the judges stopped commenting on our choreography, because also we have been in the business a long, long time. We know what we are doing.”

When Len said Brendan Cole and Lulu were “repetitious” later in the programme, James cried out ‘whatever’, to which Len replied: “All you have to do is turn up, keep up and shut up.”

Despite the awkward on-screen spat, reports later emerged that the pair had put aside their differences.

A source told The Mirror : “Len appreciated James was passionate about his performance so they drew a line under the row.”

A highlight during the 2017 run of Strictly Come Dancing came when show veteran Brendan Cole took on Shirley Ballas to defend his dance partner Charlotte Hawkins.

After their tango performance, Shirley said Charlotte had displayed too much “rise and fall”, but Brendan was having none of it and hit back saying: “There was no rise and fall”.

Shirley then suggested he play the routine back again, to which he retorted, “I will, dear, I will”.

Brendan was then scolded by Bruno Tonioli who told him his comments were “disrespectful” to the Head Judge.

However, in a later interview with the Metro, Brendan said he stood by his remarks, adding that he expected “a little bit of positivity”.

He said: “How the judges do their job is down to them and it’s not down to me to decide but I can certainly give my opinion if I don’t agree with it.

“A lot of pros will say things behind closed doors where they can’t be heard if they’re not happy.

“I don’t do that, I put it out there for all to see because I don’t believe in holding back when I feel something.”

Charlotte went on to make an early exit from the competition when she was voted out in week four, while Brendan remained with the show as a pro dancer until 2018.

Consummate professional Sir Bruce Forsyth was usually always in control of the situation as the show’s longtime host, but when McFly drummer Harry Judd was crowned King of the Ballroom, he was visibly taken unawares.

In a moment that was miles from Strictly’s characteristically tight choreography, Harry’s three McFly bandmates rushed the stage to share his celebrations.

They leapt on top of him, leaving his dance partner Aliona Vilani standing alone and Sir Bruce in a panic.

McFly were delighted by the confusion they caused however, with guitarist – and current Strictly contestant – Tom Fletcher saying: “I think Brucie thought we were streakers. We wanted to streak but I don’t think the BBC would be too happy about that.”