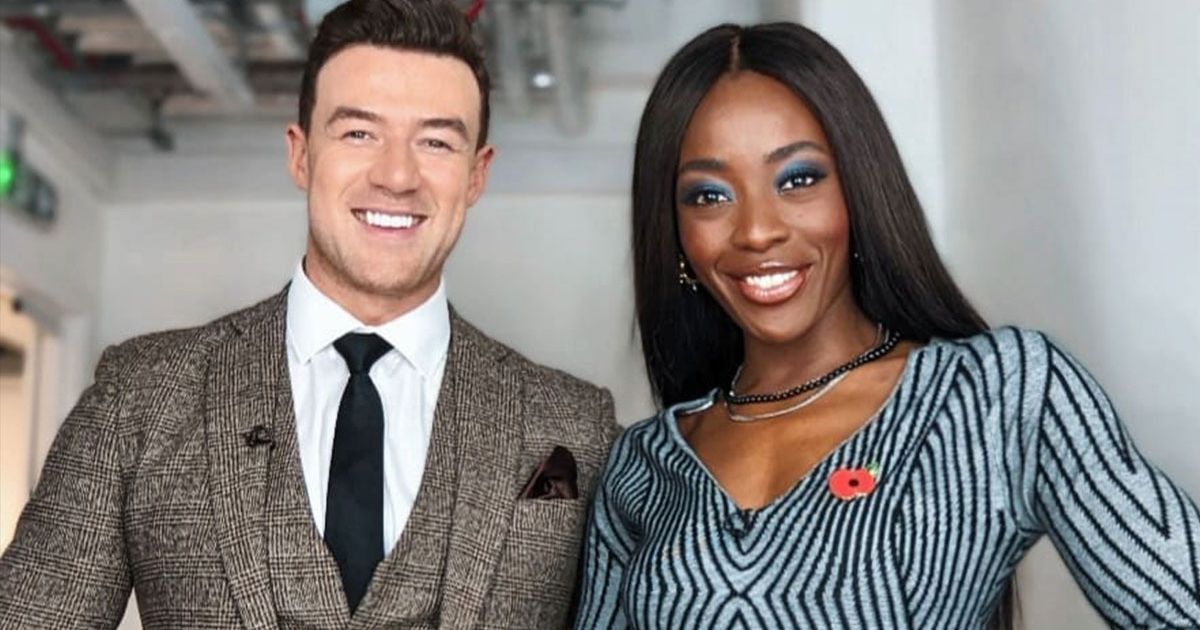 Strictly’s AJ Odudu and Kai Widdrington have shared several romantic moments on the dance floor from near-kisses to whispering sweet nothings, only fuelling the ‘curse’ rumours

And several times, they have whispered sweet nothings in each other’s ears or shared an adorable moment on the dance floor that further fuelled the romance rumours that have been swirling around them for weeks.

These rumours began on Movie Week, when Kai whispered “I love you” in AJ’s ear.

They had performed a steamy American Smooth inspired by the Whitney Houston film The Bodyguard, and each week, Strictly releases “secret mic” audio that gives viewers a quick snippet of what the contestants say to each other on the dance floor.

On BBC’s Strictly Instagram, Kai can be heard in the clip singing his partner’s praises before saying: “Aww, I love you! I love you so much!”

Not only that, but their faces got so close together at the end of the routine, viewers were convinced they had almost kissed.

Later on in the series, viewers were sent into meltdown when it was revealed AJ said “sorry, baby” to Kai after she slipped on her dress during their routine.

As they lay on the floor at the end of the performance, a devastated AJ could be heard using the tender pet name as she apologised for the mishap.

Some Twitter users picked up on the moment at the time, with one viewer writing: “‘Sorry baby’ don’t know how AJ&Kai are gonna escape this on ITT tonight”.

Speaking about the blunder on It Takes Two, AJ explained: “I had such a lovely time dancing with Kai – as always – but I’m not going to lie, I was one slip away from landing face-first on the judging panel.

“I thought I was a goner. But being able to recover from that and dig my heels in and get through the dance – I was genuinely just so relieved.”

The talented dancer shared a video of the moment on social media, admitting that she was “gutted” to have slipped.

“Gutted about the cheeky little slip on my dress during our power Paso tonight but I tried my best and we kept going. Olé,” she penned.

And during their week seven Charleston, AJ and Kai’s microphone footage was revealed, and it was absolutely adorable.

The duo can be seen pretending they’ve been invited to a glitzy bash, with Kai telling AJ: “We’ve got a ticket to the party, can you believe it?”

Seconds later, AJ pretended to down a cocktail before jumping onto a prop chair.

Kai called AJ a “legend” after another stellar performance
(

And after their romantic routine, Kai was full of praise and admiration for his partner.

“Bring it home!” he shouted, wrapping his arms around AJ and calling her a “legend.”

The pair appeared to almost kiss again in a repeat performance of their steamy routine in Movie Week.

For Musicals Week, they danced a Waltz to Sound of Music hit Edelweiss – and Kai even suggested AJ kiss him during rehearsals.

But AJ refused, telling him: “Kai, I’m not going to kiss you!”

And last week, after their Couple’s Choice routine to Janelle Monáe’s Make Me Feel, Kai could be seen hugging AJ and viewers pointed out he was “patting her bottom”.

The pair have remained tight-lipped on the rumours, only skirting around the question when grilled, and answering coyly.

Kai patted AJ’s bum at the end of the routine

But AJ may have recently blown her cover as eagle-eyed fans noticed she favourited a rather saucy message on Twitter which suggested she and Kai were “getting in on”.

A Strictly fan had penned: “Flipping love @AJOdudu what a top girl! Such a great attitude & lovely personality. I hope she is getting it on with Kai cos she deserves it! #StrictlyComeDancing #Strictly #Strictlycatchup.”

And as speculation went wild, AJ admitted she quite enjoys the fact that everyone is talking about them.

She said: “I find it exciting that everyone’s interested in us enough to take note of all of these things.”The way I see it is, everyone can see how well we’re getting on and how hard we’re working in order to try our best each and every week to put in a solid performance.”

When asked whether the rumours about them being more than friends are true or not, AJ joked: “Well, one thing that is definitely for sure is, we are doing a lot of dancing.”

During Halloween week the pair were visited in rehearsals by AJ’s young nieces and nephews, where she told them: “I’m really loving it, I love learning new dances, I like all the costumes and I really like Kai”.

And viewers were left in stitches as her nephew Odhran replied: “Why don’t you just kiss him?”

Strictly host Claudia Winkleman also told the couple, after they received positive comments from the judges for their Viennese Waltz to Dangerous Woman by Ariana Grande, that if there was a time for the pair to kiss on air it would be then.

When asked how they react to all the speculation about their relationship, AJ said: “It’s all just a bit of fun, isn’t it?

“So none of that stuff bogs us down at all. We don’t have time to be pressed to be totally honest with you.”