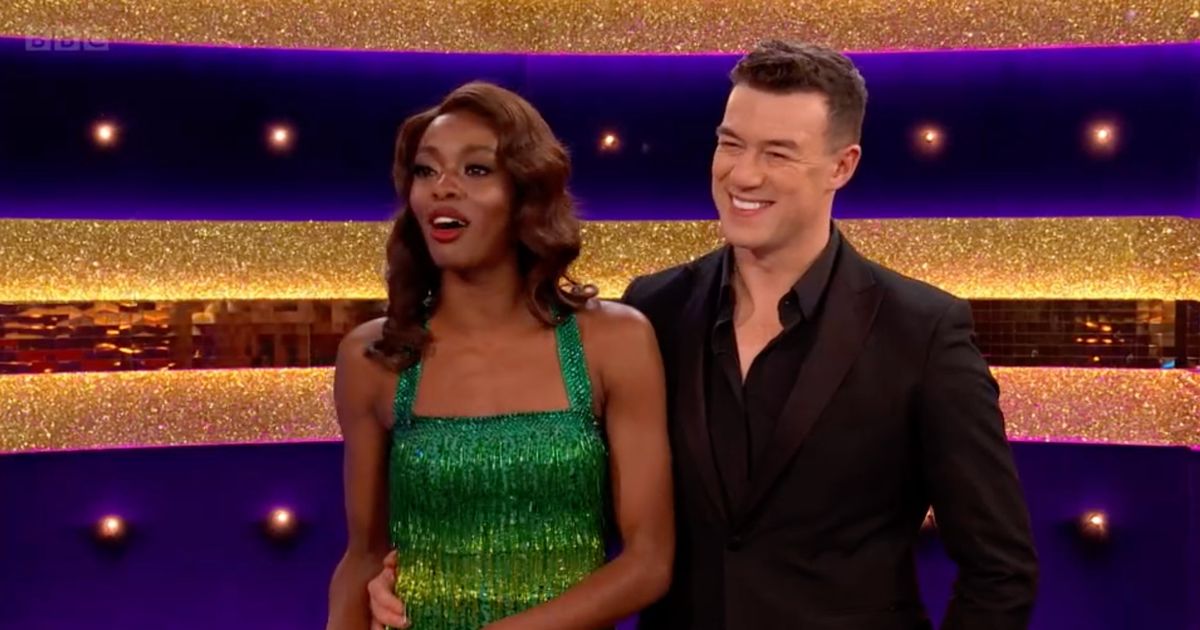 Strictly stars AJ Odudu and Kai Widdrington have been blighted by several excruciating on-stage blunders throughout the series, from almost falling into the judges laps to “over the top” smoke obscuring their routine

Strictly Come Dancing stars AJ Odudu and Kai Widdrington have had viewers glued to the screen looking for more clues they are romantically involved.

But this week they made headlines for a completely different reason.

They became embroiled in a “cheating” row that’s had Strictly viewers up in arms after they were accused of changing a routine last minute.

And it was all down to an on-stage blunder which might have cost them the entire competition, as they head into the semi-final on. Saturday.

But it wasn’t their first (literal) slip-up.

In the quarter finals, TV presenter AJ and her professional partner Kai found themselves in the bottom two after fluffing their main dance.

Viewers watched on in horror as the pair attempted an ambitious cartwheel – but AJ ended up slapping Kai around the face with her thighs in excruciating scenes.

Some Strictly fans cruelly accused AJ and Kai of “cheating”
(

While fans cringed at the dance disaster, show judges were equally unimpressed.

Craig Revel Horwood grimaced as he said: “You were totally watchable. Yes, the ending was a complete dance disaster darling but that can be fixed… one day. Well done anyway.”

Shirley Ballas praised AJ’s “pure sass” and encouraged: “It was on its way to a ten, you are fantastic. It’s just unfortunate”.

But Anton Du Beke added: “The rest of it was terrific. I loved it in general but the ending was, ‘Please stop! I can’t bear it!'”

AJ and Kai landed in the bottom two, with their place in the series at stake – but it was their rival Dan Walker and his partner Nadiyah Bychkova who got the boot instead.

And some fans thought this was down to them changing the routine so they didn’t make the same blunder again.

One tweeted: “Did AJ & Kai change the last lift?? It looked different from last night”.

In another routine, AJ slipped on her dress
(

Another added: “AJ changed the lift at the end”.

A third ranted: “#StrictlyComeDancing on that dance off Dan was much better it wasn’t fair that AJ changed the final lift!”

A fourth asked: “Did anyone else notice that AJ and Kai did a different final lift? She didn’t go over his head like she did when they flubbed it!”

In response, AJ explained the reason it looked different the second time around was because it was executed correctly.

This was the second time AJ had suffered an awkward gaffe on the Strictly dance floor.

Earlier on in the series, she slipped on her flowing gown during a performance and almost completely fell over.

As they lay on the floor at the end of the performance, a devastated AJ could be heard using the tender pet name as she apologised for the mishap.

Despite some slip-ups, the pair are strong contenders to win the Glitterball trophy
(

Afterwards, AJ admitted her “stomach dropped” and she panicked she was going to fall and land on the judges.

“I had such a lovely time dancing with Kai – as always – but I’m not going to lie, I was one slip away from landing face-first on the judging panel,” she said.

“I thought I was a goner. But being able to recover from that and dig my heels in and get through the dance – I was genuinely just so relived.”

The star also posted a video of the mishap on Instagram, writing alongside it: “Gutted about the cheeky little slip on my dress during our power Paso tonight but I tried my best and we kept going. Olé.”

Another on-stage blunder affected AJ and Kai even earlier in the series, but it wasn’t their fault.

The pair landed at the bottom of the leaderboard after their Paso Doble, and viewers blamed the “over the top” production for making it harder for them to perform, and to be seen.

The gimmicks began with smoke filling the screen at the start of the routine, obscuring AJ and Kai from view.

This was followed by cracks appearing on the dancefloor while crazy spotlights flashed overhead as they danced around the room.

“Really felt like the actual paso got lost in the production for AJ there #Strictly,” complained one viewer.

Another furiously added: “That’s it I am THROWING HANDS as an AJ fan tonight. Underscored by the judges, given a terrible song, dress and lighting, and then Rhys gets 40 for his Charleston after she only got 39 for her phenomenal one last week. I am absolutely FUMING.”

“They did AJ a dirty with that awful lighting, couldn’t see anything #Strictly,” remarked a third.

* Strictly Come Dancing continues on Saturday night on BBC One