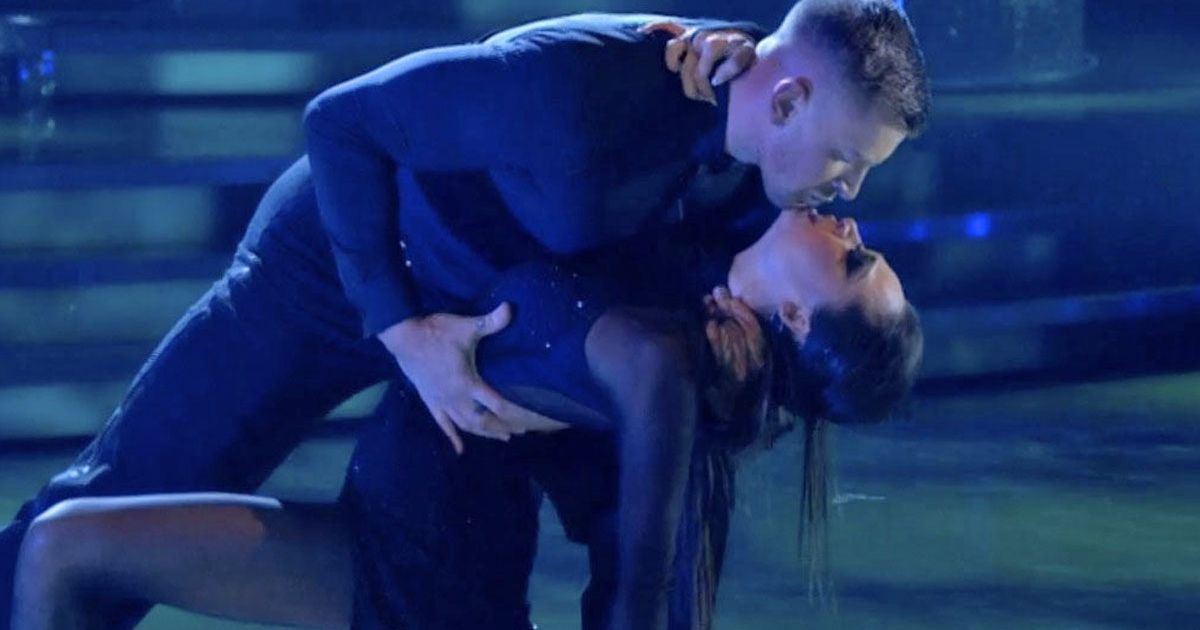 Katya and Adam became the talk of Saturday night following their Argentinian Tango to Fleetwood Mac track, Tango In The Night.

The intense routine requires couples to sell a passionate love story to the audience, with Adam repeatedly lifting Katya over her head and holding her close to him.

In the final moments as the track finished, the pair stare into each other’s eyes and with their faces inches apart.

As he snapped out of the routine, fans believed the 26-year-old Olympian seemingly went in to kiss Katya before realising he was on TV.

Apparently it didn’t go unnoticed by Eiri Munro, Adam’s girlfriend and mother to his child, either.

But while Twitter blew up in reaction to the ‘did they/didn’t they’ moment, Eiri was on over on TikTok, joking about the entire thing.

Using the trending sound of a whining baby, Eiri scrunched up her face as if she was crying and wailing.

The couple are parents to son George-Anderson
(

Above the clip, she wrote: “Watching your boyfriend almost kiss another woman on live tv… Finding out 10 million people also watched it live.”

Eiri has previously used the same sound to show off about her relationship with Adam, posting another video three days ago where she joked about his increase in fans thanks to Strictly.

Sharing an image of him in his swimming trunks, Eiri was seen laughing as she wrote: “Everyone thirsting over my man cause he’s so hot… he’s my man!”

Another sweet clip shared earlier this year saw Eiri share loving moments with Adam, including seconds after she gave birth to their son through to joking around at home.

Adam and Eiri are a happy family with their one-year-old son, George-Anderson
(

Getty Images for The National Lottery)

She wrote next to it: “Didn’t believe in soul mates until I met you #cringe.”

Adam and Eiri have been dating since they matched on dating app, Tinder, three years ago.

Last year, the couple welcomed a son named George-Anderson together, who has grown to be very much a lookalike of his dad.

Strictly fans have often got their eyes peeled for signs of the ‘Strictly Curse’ taking place , named for the show’s running ability to split up couples as celebs form relationships with their pros instead.

In 2018, Katya fell foul of ‘the curse’, having been caught passionately kissing her celeb dance partner Seann Walsh outside of a pub after a day of rehearsals.

Both in relationships at the time, Seann’s girlfriend immediately dumped him, while Katya’s then-husband, fellow pro Neil Jones, continued to work alongside her.

While they remain amicable, the following year they announced they were splitting after nearly seven years of marriage.

Katya and Neil both still work on Strictly, with Neil being eliminated in the first week of this year’s competition after being partnered with Eastenders’ star Nina Wadia.

Strictly Come Dancing airs Saturdays on BBC One with the results show airing on Sundays.