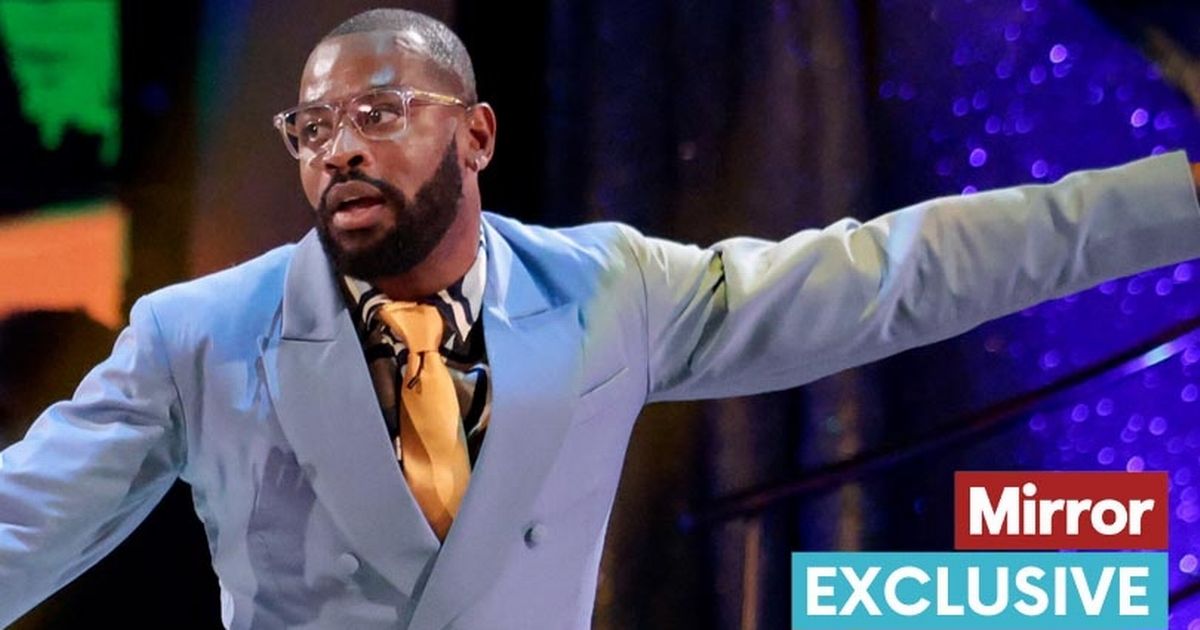 Ugo puts his best foot forward on the dance floor (

It’s the way U-gotta-go if you want to be light on your feet in Strictly – shed a few pounds to get through those rounds.

But Ugo Monye has lost so many he fears he’s shrinking into a version of Simon Cowell.

“I used to take the mick out of him for how high his trousers were and how deep his shirts – but now that is my life,” says the former England Rugby star who has shed just over a stone for the show.

“I put my trousers on and I wonder what chest size they are as they are literally just under my rib cage. They have never been higher.

“If you see me walking around London in flared trousers and a deep shirt then you know I have the Strictly bug.”

Ugo, 38, reckons being picked for the show “couldn’t have come at a better time” after he gorged on food and booze during lockdown which also saw the break-up of his marriage.

He also says he feels “safe” on the programme despite protests about three dancers refusing Covid vaccinations.

Ugo – who last night danced the quickstep with partner Oti Mabuse to The Jive Aces’ Bring Me Sunshine – told me: “We have been training three weeks and I have lost 15 pounds.

“I wear my smartwatch to clock how many steps we do as I think people don’t appreciate dancing is a truly athletic sport.

“You see dancers sashay across the floor, and people say, ‘That’s not hard’ – but you are seeing the finished product.

Ugo in his usual gig
(

The RFU Collection via Getty Images)

“This week I think we have danced more than 30 miles.

“My max heart rate is 185 – when sprinting on a rugby pitch, and doing tackles – and I’ve been doing 170s this week. I hope people get a sense of how tough it is.”

The hit BBC1 show was plunged into controversy last week when it emerged three dancers had refused to be jabbed.

But Ugo says: “I don’t think it is a controversy – all I know is I signed up to a show where they have taken everything into account, they have done due diligence according to Government guidelines.

“I can’t speak for Oti or anyone else, but I feel safe.

Strictly is a bit different from rugby
(

“I feel the right protocols have taken place.

“There’s never been a point where I have felt coming to the studio would be an unsafe environment. I feel really happy.”

Ugo – who played 241 times for his club Harlequins and is now a rugby pundit – split from wife Lucy, 32, in August just days before the new Strictly series started rehearsals.

They were married for five years after meeting in 2014 and have daughters Phoenix, four, and one-year-old Ruby.

Ugo, who won 14 caps for his country and played for the British and Irish Lions, said Strictly had nothing to do with the couple’s decision.

Strictly has some great dances planned
(

He was also dealt a second devastating blow as his father died from prostate cancer before the show started – with Ugo dedicating his first dance to his tragic dad.

Today he reveals at the height of the pandemic his usual six-pack looked “more like a keg” as his weight shot up.

He says: “I am starting to get a bit of definition back now but in lockdown three I ate and drank more so I had 15 pounds to lose.

“The show couldn’t have come at a better time.”

Ugo points out he hasn’t had time to think about anything apart from Strictly because the regime is so gruelling.

He says: “You have to live and breathe it. It’s the minimum standard. Last week I rang Oti and I was practising my routine – dancing through Waitrose.

“At the end of the night in the shower you are going over the steps, it’s all consuming but in a good way.”

Despite his marriage breakdown, Ugo says his children have been watching the dance contest avidly every week.

He adds: “My daughter Phoenix is four-and-a-half and her first comment was, ‘Why is daddy showing his boobies?’”

But Ugo admits it’s not all fun.

“But I would be disappointed if I wasn’t sore. I think it is quite a good barometer on how hard you are working.

“All the key indicators show you have worked hard, and that means you are in a good place.” Ugo has recently added to his CV by becoming a new captain on BBC1’s A Question Of Sport, now hosted by Paddy McGuinness who took over from TV veteran Sue Barker.

There has been a backlash from viewers over the Beeb’s changes to the format.

Speaking to Jane Garvey’s podcast Fortunately, Ugo said: “People protest because of their loyalty to previous people. Ultimately, the show is always going to be different when you put three new voices and faces on it – so, yeah, you expect there to be a bit of unrest.

“But for me it is an absolute honour to be a part of it. It is a real heritage show.

“I used to remember of a weekend, A Question of Sport, Blind Date and Gladiators.

“That was it for me and now I am a captain on it and I have a bit of imposter syndrome like, ‘What am I doing here?’ Change is a good thing but it is human nature not to like it.”

For now, Ugo just hopes the Strictly judges and the audience keep on liking him and his performances with Oti who has won Strictly twice before.

He adds: “I just want to be the best version of myself, I know it sounds cliche, but whatever my potential is on the show, I want to maximise that.

“As for wherever that takes me on the show, that is out of my control.”