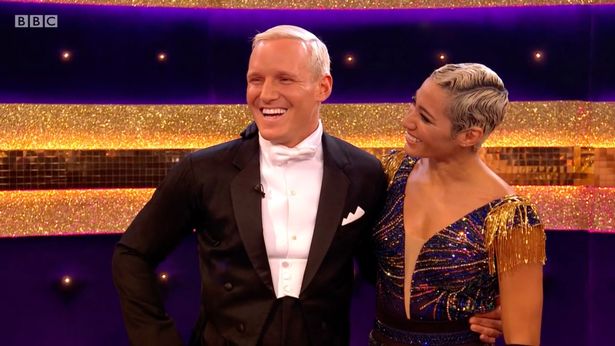 His fox trot attracted some mixed criticism from judges Motsi Mabuse, Craig Revel Horwood and Shirley Ballas though they agreed he had improved upon last week.

But while he danced around the stage, many viewers were all tweeting the same thing.

They noticed he bears a striking resemblance to Judge Robert Rinder, who appeared on the show in 2016.

Some even wondered if they were the same person, or related, as one tweeted: “Have Jamie Laing and Judge Rinder ever been seen in the same room together? #Strictly “.

Craig savaged Jamie’s performance, telling him: “The ballroom bit was really bad, your bottom was sticking out, you were creeping around like the Grinch, there was gapping all over the place.

“But all that said, I absolutely loved the opening section, the syncopation, I loved the Fred Estaire lines, it was difficult but some of it was brilliant!” he added.

Maisie Smith and Gorka Marque, and HRVY and Janet Manrara topped the leaderboard with their scores on Saturday.

They were closely followed by Nicola Adams and Katya Jones.

At the bottom of the scores were Jacqui Smith and Anton Du Beke, followed by Jamie and Karen and Jason Bell and Luba Mushtuk.