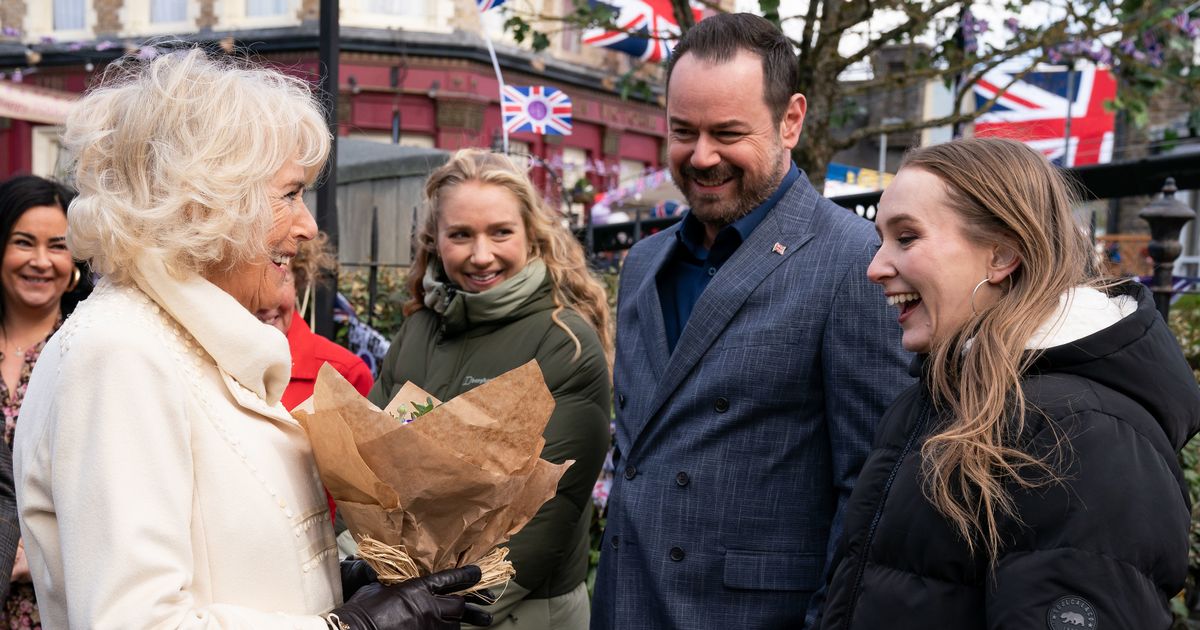 Her Majesty The Queen is said to be an avid fan of Strictly and watched Rose Ayling-Ellis win the show last year on TV. Camilla, Duchess of Cornwall, also revealed she voted for the EastEnders star to win the 2021 series.

Strictly Come Dancing has a royal seal of approval after Camilla, Duchess of Cornwall, confirmed that Her Majesty The Queen herself watches the hit BBC show.

The 74-year-old future queen also confirmed that she and 73-year-old Prince Charles are avid fans of the long-running dance competition – and that Queen Elizabeth, 95, tunes in to the show too.

Camilla made the revelations while chatting to cast members of EastEnders during a royal visit to the BBC soap set in honour of a special Queen’s Jubilee episode filming.

While at the studios in Elstree Centre in Borehamwood, North London, Camilla discussed her love for Strictly while chatting to 2021 winner Rose Ayling-Ellis – who bagged the Glitterball Trophy alongside pro dancer Giovanni Pernice.

Seeing the actress, Camilla beamed: “Rose, the Strictly star. I said we were all voting for Rose, I don’t know how you did all those dances.”

Rose, 27, then plucked up the courage to ask: “Can I ask you, does the Queen watch Strictly Come Dancing?”

Camilla confirmed that the Monarch does, saying: “I think she does. She probably watched you.”

The Daily Mail say Rose later told them: “It was really funny because she’s a huge fan of Strictly Come Dancing and she mentioned that she voted for me which is so lovely, and her grandchildren watch it.

“It is amazing, so lovely. I mean come on, its the Royal family voting for me, sometimes you forget how many people watch the show, I am mind-blown.”

Rose stormed to victory during last years’ show along with 31-year-old Giovanni after wowing the judges and viewers with breathtaking routines.

At one point in the series, viewers were moved to tears as a performance included the sound cutting out to give fans an idea of how Rose, who is deaf, experiences the world.

Camilla has long been known to be a fan of Strictly – and was granted access to a rehearsal of the show back in 2011 and she is known to have a friendship with judge Craig Revel Horwood, 57.

A show source said: “The visit was top secret but Craig thought it would give the remaining contestants and the crew a real boost if Camilla came down to watch them in action.

“The Duchess is a big fan of the series and watches the show with Prince Charles so she was very knowledgeable when she was watching the run through.

“None of the contestants could believe it when she walked in, but it certainly made them concentrate even more in the rehearsals and a few of the dancers seemed a bit starstruck.”

While Craig has previously campaigned to have Camilla join the show as a special judge.

He told Hello! in 2016: “When it comes to my dream new judge – well, it’s got to be my friend the Duchess of Cornwall.

“I’ve been desperate to get a royal on the show. Camilla could be just wonderful.”