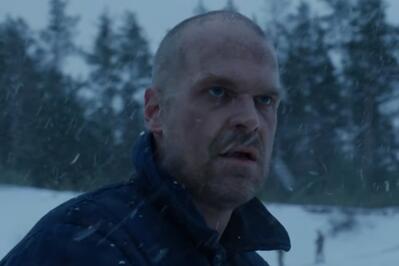 Stranger Things really left us hanging after that epic Season 3 finale and shocking mid-credits scene. The tantalizing peek at what’s to come opened the gate to more Upside Down intrigue and left us wondering if Hawkins’ chief of police was really history after all.

Now, we know the answer to that cliffhanger, plus a few other details about what’s to come in Stranger Things 4. Read on to find out everything we know about Stranger Things Season 4 so far.

Production has resumed. Like many shows, filming on Stranger Things 4 shut down earlier this year due to COVID-19 restrictions, but filming officially resumed in October! The Stranger Things Twitter shared a behind-the-scenes photo from the set of a slate in front of what appears to be an antique clock. We’ll have to dissect that later.

meanwhile in the upside down… pic.twitter.com/BtPlMjy0pS

Filming for the sci-fi favorite had already begun in the spring, but it was one of several Netflix shows and movies filming in the U.S. and Canada to be shut down in March. In an April interview with Jimmy Fallon, Millie Bobby Brown said that the crew had shot two weeks of the new season in Lithuania before the shutdown.

It looks like it won’t be the last season. Don’t count on your next trip to Hawkins to be the last. Co-creator Ross Duffer told The Hollywood Reporter in August that the show won’t end with Stranger Things 4. “Season 4 won’t be the end,” he said. “We know what the end is, and we know when it is. [The pandemic] has given us time to look ahead, figure out what is best for the show. Starting to fill that out gave us a better idea of how long we need to tell that story.”

Quiz: What Would Your Fate Be in Stranger Things?

The episode count is unclear at this time. It was reported that there would be eight episodes in Season 4, the same as in both Season 1 and Season 3 (Season 2 was the outlier with nine episodes). However, an image of the season’s scripts shared by the writers of Stranger Things 4 indicates that there may be nine episodes.

Hopper will return. The most gut-wrenching moment of the Stranger Things 3 finale was when Jim Hopper (David Harbour) seemingly sacrificed himself so Joyce (Winona Ryder) could close the gate to the Upside Down and blow up the machine. His letter to Eleven (Millie Bobby Brown) rubbed extra salt in that wound, with Hopper expressing how he truly feels about Eleven, seemingly too late. David Harbour told ET Online that he had “hope” Hopper would be the mysterious American in Russian captivity right now, saying, “He did glance around a little bit, but he seemed to be trapped and the machine exploded. And then you cut to… some town in Russia right? Where there’s some American and some prisoner. I don’t know, I mean, it seems strange,” he said. And, indeed, the first teaser for Stranger Things 4 confirmed that he is indeed alive.

However, it’s not going to be all smooth sailing for the good chief of police. In a letter, the Duffers explained that “he is imprisoned far from home in the snowy wasteland of Kamchatka, where he will face dangers both human… and other.”

There’ll be a “big reveal” about Hopper’s history. David Harbour appeared at Comic Con Liverpool in March and said that fans should expect to learn something major about Hopper’s past in Season 4.

“In Season 2, Eleven goes into the … basement of the cabin, and there’s five boxes, one of which has Brenner’s stuff from Hawkins Lab, one of which says ‘Dad,’ and one of which says ‘Vietnam,’ and one says ‘New York,'” he told the crowd. “I know specifically that in Season 4, we will give you a big huge reveal about Hopper’s backstory which we haven’t — you sort of sensed that in certain ways, but we haven’t really told you about it — and I’m so excited about revealing this aspect of the character. It’s one of the things that I’ve known since the first frame of the first shot, and we haven’t expressed it yet, and finally we’re going to express it in a big way. It’s my favorite thing about him that you guys don’t know about him yet. But it has to do with these backstories of New York, Vietnam, and Dad.”

The Byers family is moving to a new location. The tail end of Stranger Things 3 saw Joyce selling her house and relocating to another town with Will (Noah Schnapp), Jonathan (Charlie Heaton), and a newly de-powered Eleven in tow, leading to a particularly gutting goodbye between the kids and the friends they were leaving behind. As Noah Schnapp told ET Online, “I know that I might have a separate storyline from everyone else, so we might be filming, like, in another place.” Matt Duffer confirmed Schnapp’s suspicions that we might see some action outside of Hawkins, telling EW, “It’s going to open up a little bit, not necessarily in terms of scale, in terms of special effects, but open up in terms of allowing plot lines into areas outside of Hawkins.”

The first teaser for the fourth season stated bluntly that our heroes are “not in Hawkins anymore.” The same teaser also indicated that time will be a big factor in the new season, and we already have some theories about how that might happen.

Prepare for a new type of horror. The Duffers revealed that our Hawkins pals who are still in America will also face a grave new threat, writing, “a new horror is beginning to surface, something long buried, something that connects everything.

Jamie Campbell Bower plays Peter Ballard, a caring man who works as an orderly at a psychiatric hospital. Tired of the brutality he witnesses day after day, will Peter finally take a stand?

Robert Englund plays Victor Creel, a disturbed and intimidating man who is imprisoned in a psychiatric hospital for a gruesome murder in the 1950s.

Sherman Augustus plays Lt. Colonel Sullivan. He’s an intelligent, no-nonsense man who believes he knows how to stop the evil in Hawkins once and for all.

Mason Dye plays Jason Carver, a handsome, rich athlete who is dating the most popular girl in school. But as a new evil threatens Hawkins, his perfect world begins to unravel.

Tom Wlaschiha plays Dmitri, a smart and charming Russian prison guard. But can he be trusted?

Erica will play an even bigger role. Priah Ferguson, who plays Lucas’ (Caleb McLaughlin) younger sister Erica, has been promoted to series regular for the upcoming fourth season. Dustin even passed on the gang’s Dungeons & Dragons set to Erica in the finale’s final minutes. So it’ll be fun to see whether Erica has embraced her inner nerd when the show picks back up.

Get ready to see a lot more of Murray Bauman too. Brett Gelman, who plays Murray, has also been upped to series regular for Season 4. We’re hoping Murray’s in-depth knowledge of Russian conspiracies will prove handy in helping rescue Hopper from the Kamchatka prison he’s being help captive in!

Some of the younger kids might get jobs. We don’t know how old the Dungeons & Dragons party will be when Stranger Things returns for a fourth season, but there’s a chance that Dustin (Gaten Matarazzo) could follow the lead of his pal Steve (Joe Keery) and get a job. “For so long, I’ve wanted to see him work at the Arcade — at the Palace Arcade with Keith — and have Keith be his boss,” Gaten Matarazzo told ET Online. “They have that rivalry and it’s hilarious and I want to work with Matty [Cardarople] more because he’s amazing.” Matarazzo also said he expects audiences to get more of Dustin’s girlfriend Suzie (Gabriella Pizzolo) in the new season.

It will have a different feel than Stranger Things 3. While Ross Duffer said that he and his brother only had the “broad strokes” of a fourth season in mind after Stranger Things 3 hit screens, they expect it will have a different vibe than the previous season. “We’re pretty excited about where it’s potentially going to go,” he told EW. “It’s going to feel very different than this season. But I think that’s the right thing to do and I think it’ll be exciting.”

We already know some of the movies that will inspire the new season. The Stranger Things writers spent months revealing an ongoing series of films that are all somehow connected to Season 4. The list includes (in order of reveal): The Peanut Butter Solution,The Fisher King, Bill and Ted’s Bogus Journey, You’ve Got Mail, Ordinary People, Hellbound: Hellraiser II, Billy Madison, The Fast and the Furious: Tokyo Drift, Harry Potter and the Chamber of Secrets, Black Swan, Young Sherlock Holmes, Ace Ventura: Pet Detective, Hackers, Silence of the Lambs, The Good Son, and more. Check out the full list on their whiteboard below.

This is it — our last Video Store Friday! Every time we discussed a movie, we wrote it on a whiteboard. So here it is — the Video Store whiteboard in its full glory. That means that — yes — on this board, you will discover the DNA that makes up season 4! Enjoy, and stay safe! pic.twitter.com/T7hG1AR3s4

Season 4 will film in New Mexico. Though the first three seasons were all shot in Atlanta, Deadline reports that a significant portion of Season 4 will be shot in New Mexico. “Season 4 is bigger, bolder and more intricate than ever,” Netflix VP of Physical Production Momita SenGupta told Deadline. “So this is the first time the show will be traveling beyond Atlanta.”

looking for new members… are you in? pic.twitter.com/P1xAWNUPss