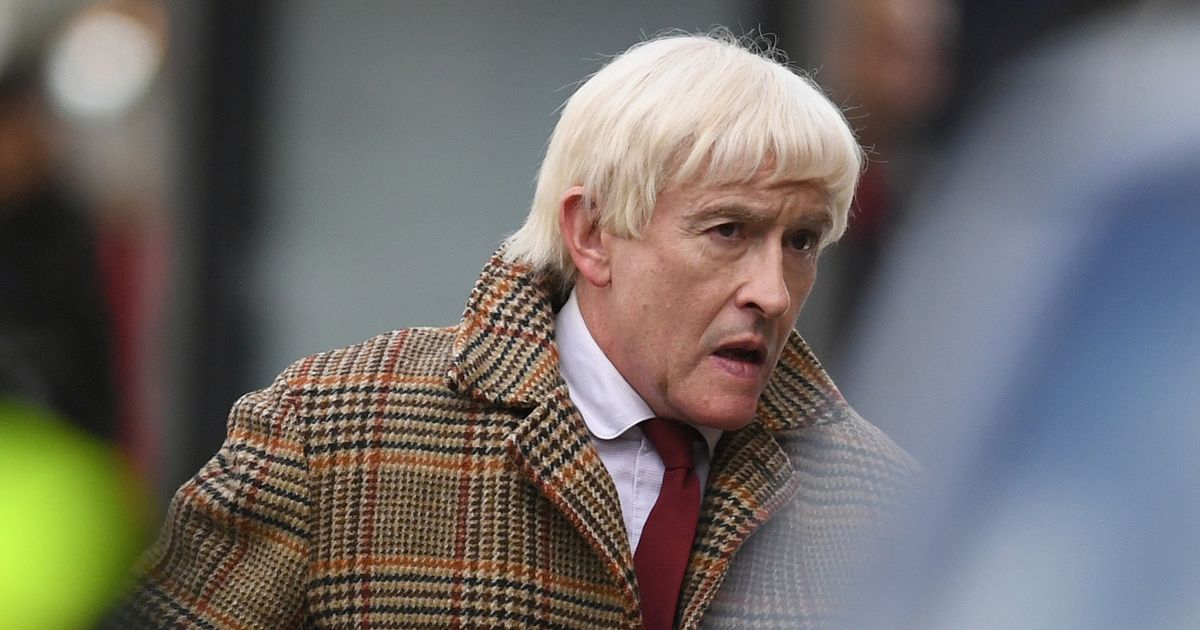 Steve Coogan fans may be left cold by his uncanny likeness to vile paedophile Jimmy Savile who he has been transformed into for a new BBC drama.

Following the death of the once loved presenter, a long list of vile crimes were uncovered – including accusations that he had sexually abused more than 70 people, including children as young as eight.

While Steve is well known for playing comedy roles, including his hugely popular character Alan Partridge, he has been transformed into Savile for upcoming series The Reckoning – which is set to explore the presenter’s rise and the sexual abuse allegations that emerged after his death.

An on-set photo of Steve in character shows him looking eerily like the late presenter – after earlier photos from the series showed Savile in costume as a jester.

The actor’s naturally dark hair is hidden behind a blonde wig, while details like gold jewellery add to the illusion of the dead star.

On set sources also confirmed that Steve was seen with a Rolls Royce as he channeled the extravagant life that Savile enjoyed when he was alive – while a scene being filmed saw him entering a Manchester nightclub.

The drama charts the TV presenter’s rise to success in the industry, before his sickening crimes were exposed after his death
(

The miniseries is being directed by Sandra Goldbacher and produced by ITV Studios – and will air on the BBC at a future date reported to be in either 2022 or 2023.

Steve has previously defended his decision to portray Savile in the drama.

He told the BBC last month when his involvement in the show was announced: “To play Jimmy Savile was not a decision I took lightly.

“Neil McKay has written an intelligent script tackling sensitively a horrific story which, however harrowing, needs to be told.”

The BBC has also defended its decision to celebrate the life of the vile sex abuser in the new drama.

The corporation said in a statement: “[We are] working closely with many people whose lives were impacted by Savile to ensure their stories are told with sensitivity and respect.”

Coogan has defended his role in the new TV drama
(

While director Sandra said: “The Reckoning is a unique opportunity to give Savile’s survivors, the people who inspired this project, a voice.

“I feel sure that Steve Coogan’s powerful performance as Savile will create a debate around how the cult of celebrity cloaked him from scrutiny.”

Meanwhile writer Neil argued: “I think this is a story that has to be told.”

And producer Jeff Pope said: “We must understand why a man like Jimmy Savile seemed to remain immune for so long to proper scrutiny and criminal investigation.”

Savile was a hugely popular TV presenter during the 1970s and ‘80s, hosting shows including Top of the Pops and Jim’ll Fix It – while also hosting shows on Radio 1.

He was well known for working with and supporting charities and in 1990 he was rewarded for his charitable work with a knighthood while he also managed to gain access to members of the royal family and other high profile people during his life.

Coogan looked club as he filmed scenes outside a Manchester nightclub
(

Savile had previously rejected a knighthood in the 1980s reportedly due to concerns over his private life – while the committee responsible to allocating knighthoods were tipped off in 1998 that “reports of a paedophilia nature” could emerge about at a later date.

Indeed, reports did later emerge – but not until after the star died.

It has since become apparent that he used his charity work and his work with hospitals, prisons and at the BBC to get close to vulnerable young women who he abused.

After his death, an ITV documentary – originally planned to be a Newsnight investigation on the BBC, only to be picked up by ITV after the corporation ditched the special – uncovered the vile accusations agains the star.

A 2016 independent investigation revealed the Savile was able to get away with his crimes for so long due to a “culture of fear” surrounding the star.

The BBC reports: “The Dame Janet Smith review identified 72 victims of Savile in connection with his work at the BBC, including eight who were raped. Eleven of his victims were younger than 12 years old.”