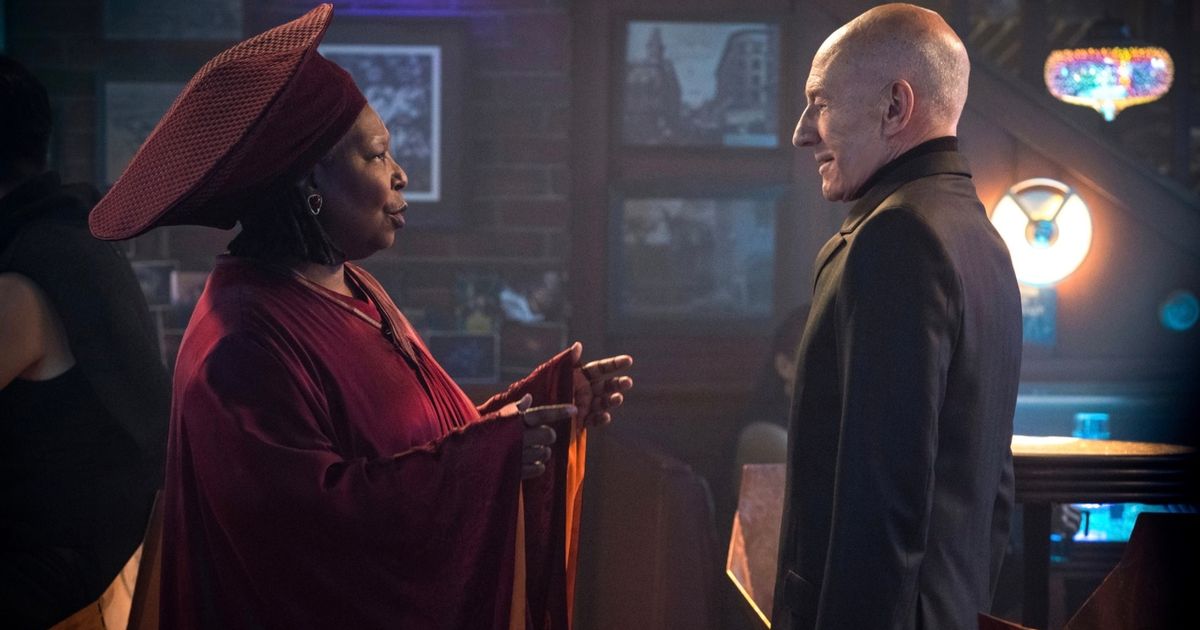 The Hollywood legend – who has Emmy, Grammy, Academy and Tony Awards to her name – is reprising her beloved role as El-Aurian bartender Guinan in season two of Star Trek sequel ‘Picard’

Whoopi Goldberg is back as Guinan in Star Trek: Picard (

Star Trek fans have been left delighted as it has been finally confirmed that Whoopi Goldberg is returning to the franchise as iconic barkeeper Guinan.

The 66-year-old EGOT winning actress is donning her supersized hat and preparing to fill up the drink glasses for season two of the Sir Patrick Stewart fronted series Star Trek Picard.

Whoopi became a favourite for fans of Star Trek The Next Generation when she joined the cast in 1988 as a recurring character who ran the bar on the Enterprise D.

She went on to feature on episodes of the smash series until it ended in 1993 – and also appeared in the films Star Trek Generations in 1994 and with a brief appearance in Star Trek Nemisis in 2002.

Now Whoopi’s return to the role has been confirmed by the latest trailer of Star Trek Picard season two which will see 81-year-old Patrick’s iconic character Jean-Luc Picard travelling back in time to 2024 with Guinan joining him for the ride.

Reacting to the first look at Whoopi who is returning to her role for the first time in 20 years, fans expressed excitement on social media.

One declared on Twitter : “Literally crying at this…” while sharing a screen grab of Whoopi as Guinan.

Whoopi joined the cast of Star Trek: The Next Generation in 1988
(

And another fan tweeted: “Wait…GUINAN?! I was already bursting with the excitement for the second season of this but after watching this trailer, my excitement has gone through the roof!”

Back in 2020, Sir Patrick appeared on US talkshow The View where Whoopi is one of the show hosts.

He “formally invited” the star to join the cast of his Star Trek sequel series – with the Hollywood icon gleefully agreeing.

She went on to share her fond memories of working on the series in the ‘90s.

“I’ve said this on the show before, but Star Trek was one of the great experiences, from the beginning to the end.

Orla Brady as is also returning as Picard’s Romulan employee Laris, while Brent Spiner – famous for playing the android Data – is back as Altan Inigo Soong.

Fans are thrilled to see Whoopi returning to the franchise
(

Guinan is not the only familiar Next Generation character to return, as John de Lancie is back as the god-like alien Q who sends Picard and his team centuries back into their past.

While the Borg Queen – a villain who featured in the film Star Trek First Contact and in various episodes of Star Trek Voyager – is returning but played by Annie Wersching as opposed to original actress Alice Krige or Voyager actress Susanna Thompson.

Star Trek: Picard is due to begin airing in the UK via Amazon Prime on Friday 4 March.

Elon Musk’s robots could develop personalities and be your friend, billionaire claims