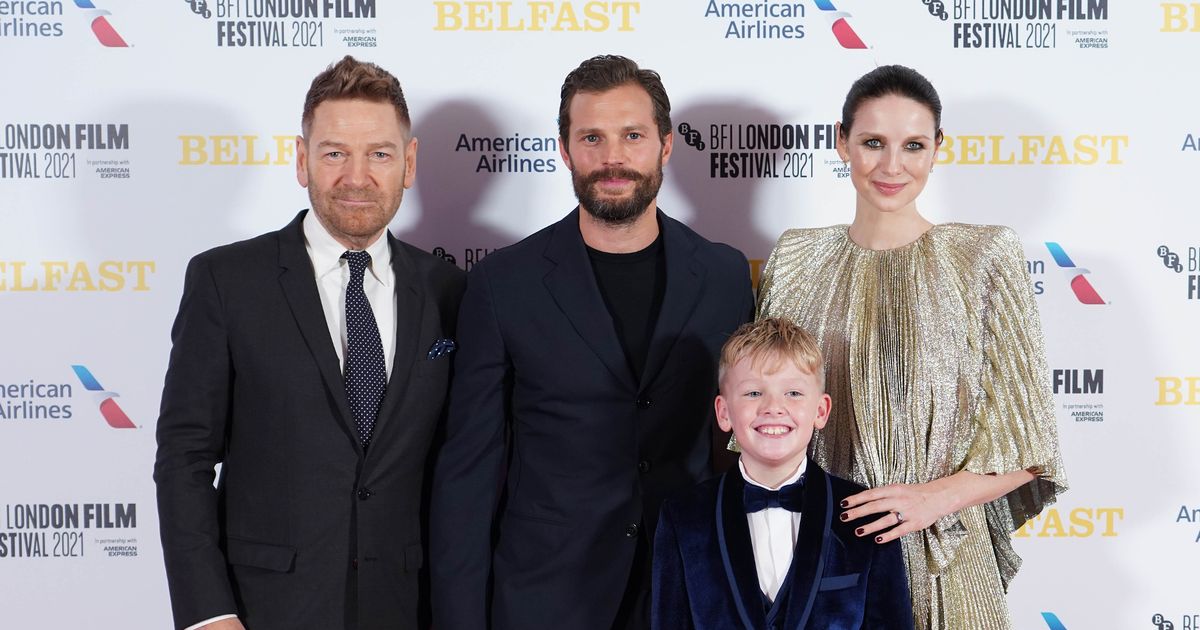 Turned out in his Sunday best while waiting for his turn on a makeshift swing, this blond-haired Belfast boy could scarcely have dreamed of the remarkable future ahead of him.

As the sectarian bloodshed of the Troubles erupted in the late 60s, the youngster and his family left their home for a new life in England.

Yet the first nine years of his life were to have such an impact on Sir Kenneth Branagh he has created a love letter to his childhood with new film, Belfast.

And while he has obviously not forgotten those early years growing up in a working-class area of the city, nor have his old friends and neighbours.

Eric Armstrong was the man behind the camera on that Sunday afternoon in 1966 as the young Kenneth stood waiting for a go on the swing in Tiger’s Bay, North Belfast.

The grandfather, now 83, and former draughtsman at the famous shipyard Harland and Wolff, lived on Mountcollyer Street too.

He says: “The Branaghs were at 96 and we were 102. I knew his mother and father, Frances and Bill.

“Bill was a joiner and I remember he took me in to see his new shed in the back yard, and I fixed the television for them.

“They were very nice people, good neighbours, and I have a feeling I know where Kenneth got his voice from.

“When his mother would call out into the street to get the kids in for their tea, she could certainly project – she reminded me a bit like of the actress Peggy Mount.”

Looking back on where the actor spent his early years, Eric, who now lives in another part of Belfast, recalls his old area’s modest surroundings.

He says: “A section of Mountcollyer Street had been hit during the Blitz, so the corporation houses we lived in were quite modern back then.

“They cost £1.23 a week to rent and there were two small bedrooms upstairs and a big front room that ran front to back in the house, as well as a kitchen at the back and a little hallway.

Eric Armstrong with his daughter Irene
(

“They weren’t huge by any measure but they were enough for lots of families.

“The Branaghs’ house would have been just like ours, with a little yard at the back.” One of Eric’s daughters, Doreen Monds, is the little blonde girl in the picture.

Now 60 and living in the Isle of Man, she recalls playing skipping rope games and children’s ball game favourite “kerby” with Sir Kenneth and other kids in the street.

The mum-of-one says: “You can tell it was a Sunday in the picture because of what we’re all wearing. We’d be dressed up in our Sunday best and we had to make our own fun by making our own swing on a Sunday because the swings in the park would be tied up.

“We were great little pals back then. That’s me on the swing, with Kenneth’s big brother Bill, and Linda back at the fence beside Kenneth and another little boy from the street.

“Other times we’d all line up with a skipping rope and the big ones would swing it round for five or six of us little ones to do the jumping.

A young blond haired Kenneth Brannagh, (centre beside lamp post), watches as Eric Armstrong’s son Bill and daughter Doreen have their turn on the swings
(

“We had big heavy ropes in those days and there wasn’t much traffic so when a car would come along we’d set it down for the cars to drive over.

“I’m looking back at it all through a child’s eyes, of course, but looking back it felt like an idyllic time.”

She says: “It was a nice street. With a little park just across from the houses, we had a nice start to our childhood.”

Belfast, written and directed by Sir Kenneth, is a semi-autobiographical coming-of-age story which charts the life of a working-class family and their nine-year-old son Buddy, played by Jude Hill, as sectarian tensions simmer over in the summer of 1969.

While Sir Kenneth, 61, would come to be known for his cut-glass accent and love of Shakespeare, it was on Mountcollyer Street that he first cut his teeth in front of a live audience. That’s according to childhood friend Linda Page, 64, now Linda White.

She says: “My mum Mary used to mind wee Kenneth when we were small. The Branaghs lived at number 96 and we were at 100 and the two of us were very good friends.

“Although I’m embarrassed to say that when we played schools and I played the teacher, I’d annoy him by giving him a slap when he didn’t do his sums for me!

“My mummy used to have big pulleys from wall to wall in the back yard and we’d put sheets and blankets on these.

“Me and Kenneth and some of the other kids would put on plays and we’d pull the sheets on the pulleys up and down like curtains.

“One that sticks out in my mind was Dracula. We’d do our plays and the neighbours would come and see us.

“That’s what my mum used to joke about, she’d say, ‘It was our Linda who got wee Kenneth on his way to being an actor.’”

But as the 1960s came to a close, the mood in Belfast soured as tensions between the Catholic and Protestant communities escalated.

In his book, Sir Kenneth, whose family had a “nominal allegiance” to their Protestant faith, describes clashes outside his house as his mother “stuffed me underneath the dining-room table and tried to control my terror”.

He writes: “Bill, watching at the window, described how they were lifting the draining grates from the gutters and smashing them.

“With the broken pieces of wrought iron they smashed a single window in each of the Catholic houses.

“It meant, we know who you are… and if you don’t move out, then next time we’ll set the house on fire.”

Grandmother Linda, who now lives in Newtownabbey near North Belfast, recalls: “It was a scary time. Our street was mixed and as children we all played together – Catholics, Protestants, we never thought anything about religion.

“And then we saw people getting put out. We’d see the men coming down the street to put the windows in.

“Kenneth and his family would have been there for some of it but they were gone before things got really serious.”

The Armstrongs also left the area, although remained in Belfast. Doreen says: “We moved to a residential area on the outskirts of the city where people were from mixed backgrounds.

“Mountcollyer Street, which is gone now, had been mixed too, but people were being petrol-bombed out of their homes in that part of the city because they were the wrong religion and it made it difficult for families to stay.

“My parents had already planned the move by then and when the time came, the way they broached it was that it was going to be exciting.”

More than 3,500 people were killed during the 30-year Troubles and tens of thousands were displaced.

Sir Kenneth was nine when his family left Belfast in early 1970.

“I was in tears as my parents told me about the move, despite their promises of a garden and my own bed,” he wrote in his autobiography, Beginnings.

“At the end of an evening of sobs, I relented enough to ask: ‘So where are we going?’ ‘Reading, son.’ My dad spoke as if he were talking of Shangri-la.”

They attended the premiere in November
(

She says: “I can still picture the big lorry coming and all the furniture going out to it. I’m not 100% sure what Kenneth thought of it all.

“He wanted to go but he didn’t. It was sad to see them go but we’ve always been very proud of him.”

Recalling the first time she saw him on screen in Hamlet, Linda says: “We were all there in front of the TV and that was the first time we realised he was doing Shakespeare.

“We all looked at each other in shock. I thought it was going to be a cowboy film or something but it was fantastic.

“I remember hearing he’d come back years ago to visit Mountcollyer Street before it was knocked down and if we’d known he was coming over we’d have gone along to give him a wave.”

She says: “It means a lot that Kenneth has decided to look back on those early years in Belfast. We’re really proud of all that he’s done.”

*Belfast is in cinemas now.