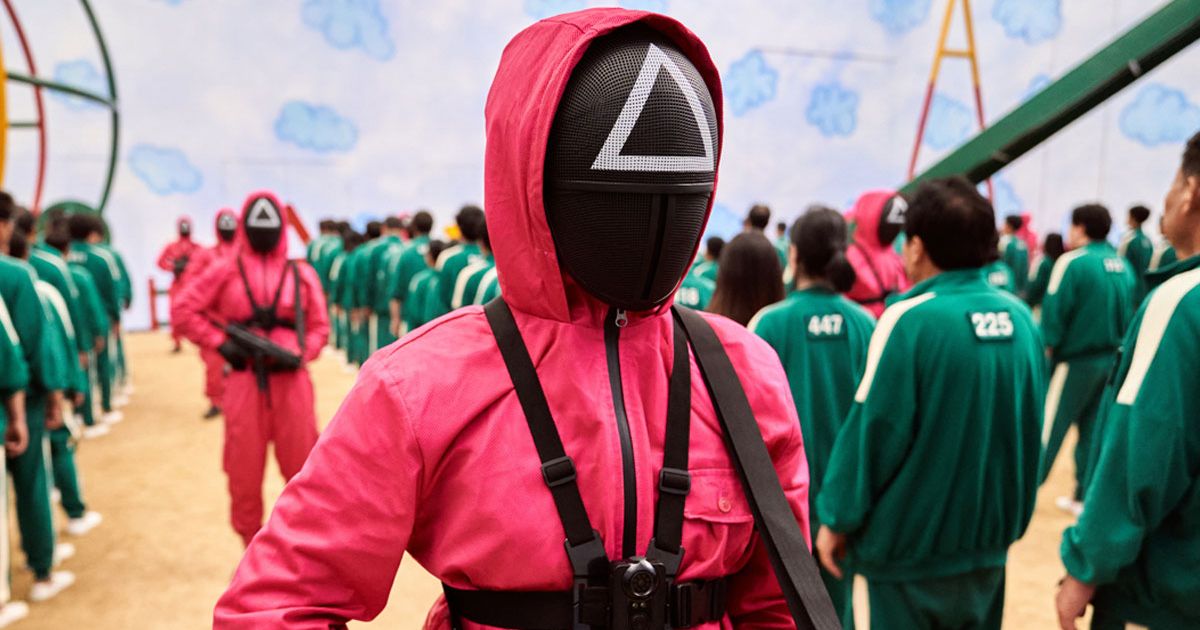 *Warning contains spoilers* Every player in Netflix’s record-breaking Korean survival series Squid Game wants to know what game they’ll be playing next, but now fans think the writing was on the wall the whole time

Squid Game fans reckon they’ve spotted clues to all the games on the walls of the dormitory the contestants share.

In Netflix’s record-breaking Korean survival series, each player needs to win a number of popular childhood games – or die, basically.

Obviously if you know what the game is in advance, you have a distinct advantage – we’re talking honeycomb here.

And so super fans were staggered when they realised the writing was on the wall the whole time – quite literally.

As contestants started to drop off, their beds were removed from the dormitory, revealing the white walls behind them.

Hidden behind all the bunk beds are in fact drawings on the walls indicating what games were going to be played.

From the tug of war to the glass steps, the whole shebang is up there for everyone to see had they only know what they were looking for.

At the start of the series, the illustrations were easily missed as hundreds of beds were stacked against the wall, but as contestants were killed for not winning the games, their beds were taken away.

However, fans couldn’t believe that no-one had spotted them.

“As if nobody ever noticed the drawings on the wall when they’re holed up there the whole day,” one person tweeted.

Seong Gi-hun could have done with a heads-up
(

Another commented: “The room they were sleeping in actually had drawings of the games they were going to play and in order.”

While a third pointed out: “From the beginning, All the games were drawn already on the wall but no one noticed it.”

But while everyone may be talking about Squid Game, Netflix has come under fire for its poor use of English subtitles in the show.

Her posts lead to a flurry of support from outraged viewers, who agreed the translations were “insulting” and “needlessly condense”.

Youngmi fumed: “Translation was so bad. The dialogue was written so well and zero of it was preserved. Such a shame. Translation is extremely important.

“Not to sound snobby but I’m fluent in Korean and I watched squid game with english subtitles and if you don’t understand korean you didn’t really watch the same show.”

Despite the supposed discrepancy, fans can’t wait for a second series and if the end of the first one was anything to go by the scene is set up nicely.

Speaking to Forbes magazine director Hwang Dong-hyuk said: “If I do get to do one — one would be the story of the Frontman [the former policeman who now oversees the game].

“I think the issue with police officers is not just an issue in Korea. I see it on the global news. This was an issue that I wanted to raise. Maybe in season two I can talk about this more.”

*Squid Game is available to watch now on Netflix

Will there be a Squid Game Season 2? Netflix’s cryptic tweet confuses fans