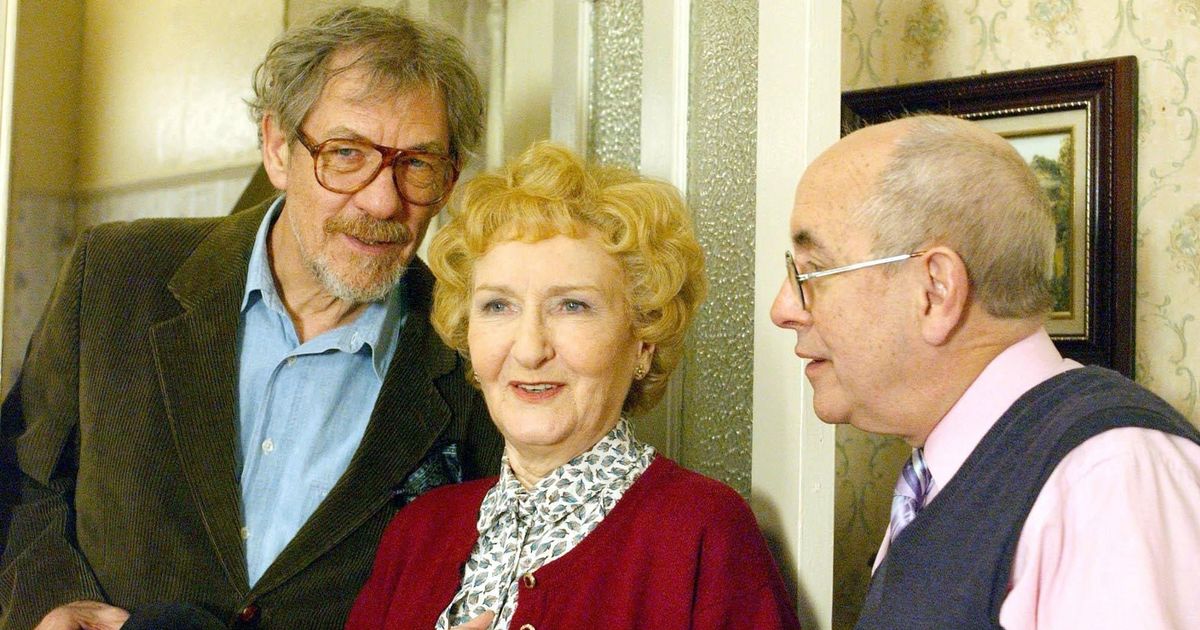 Eileen Derbyshire has once the longest-running actress on the set of Coronation Street.

The legendary actress played the role of Emily Bishop for a staggering 55-years played from January 1961 to January 2016.

During her time on the cobbles, Eileen was involved in some of the soaps most poignant and controversial storylines, and her extended time on the ITV soap makes her the longest-serving female cast member in a British TV soap.

After she decided to retire from her role as Emily in 2016, the actress made a brief return to the cobbles three years later.

And in 2010, Eileen was appointed an MBE on Queens Birthday Honours list for her long acting career.

Since then, the soap legend has remained primarily out of the spotlight, but she has suffered tragedy too.

Here, The Mirror takes a look inside the life of Eileen from family heartbreak to her well-known son and her long lasting friendships with her former Corrie co-stars.

Eileen appeared on Corrie for 55 years
(

Eileen faced heartbreak earlier this year when her husband of 55-years sadly passed away after his battle with Alzheimer’s.

The former Corrie actress, enjoyed more than five blissful decades with her husband Thomas W Holt before his death in February this year.

She had met Thomas, a former engineer, in 1964 and they settled down together in a cottage in Cheshire.

The pair welcomed son Oliver together, who went on to make a huge name for himself in the newspaper industry.

Eileen’s well-known son, Oliver, who is a columnist for Mail On Sunday, shared the tragic news of his father’s passing in his column.

Eileen and her husband Thomas

At the time, the writer reflected on how his dad had taken him to hist first football game at Stockport County’s Edgeley Park.

Oliver penned: “My dad never forgot Stockport even when he was deep into his struggle with Alzheimer’s Disease. He wanted to go back there and revisit all the places of his youth. Sometimes, he asked me if I’d give him the bus fare for the journey.”

Revealing his dad died last weekend, he went on: “He was unconscious by the time I arrived but, after I had been sitting at his bedside for a while, I told him I’d been to watch the home game against Sutton United 10 days earlier.

Out of the limelight

When Eileen decided that her time on the cobbles was up, she cited personal reasons as to why she was leaving after almost 60 years.

Since then, Eileen has remained out of the spotlight.

The actress is rarely seen walking red carpets or attending events, with her only big appearance occurring when she made a swift return to Coronation Street in 2019.

Eileen reprised her role as Emily for a mere few moments as she appeared via video call to wish to wish her dear friend Ken Barlow a happy 80th birthday as celebrations got underway at the Rovers Return.

At the time, soap insiders said Corrie bosses were keen to get the actress back on the cobbles.

A source told The Sun: “Talks are always on-going between Eileen and Coronation Street bosses, nothing has been confirmed yet but the conversation is always open.”

However, it became apparent that Eileen had little to no interest in actually returning to the set and reprising her role permanently.

The star, now 90-years-old, Eileen enjoys a simple life with her son Oliver previously calling her an ‘incredibly private person’.

The writer previously said his mum is reclusive, just that she is very private and likes to keep to herself.

Eileen’s son has also said that his mum is “one of the last of a dying breed of old-fashioned actresses who do it for the love of acting, not for all the attendant publicity”.

Eileen is a legend among the Corrie clan
(

While Eileen may have stepped out of the limelight, she still holds incredibly close bonds with a number of her former co-stars.

The actress is a proud Godmother to a number of her co-stars children including three of William’s kids and Barbara Knox’s daughter Maxine.

Having appeared on the soap for almost 60 years, Eileen is a legend among the Corrie clan and they hold nothing but the utmost respect for the long-running actress.

Eileen’s character Emily departed Weatherfield in a storyline which saw her travel to Peru to help her nephew Spider Nugent with his charity work.

But then she returned to live in Edinburgh with her niece Freda Burgess.

Although fans are doubtful that she will ever make a return now, Corrie bosses have previously insisted that the door is always open for Eileen’s character to make a return, whenever that may be.

Although her shock exit happened back in 2016, Corrie fans are still pining after Emily Bishop.

Following the recent death of long-running character Norris Cole, reminiscent fans shared their heartache that Emily was nowhere to be seen at his funeral.

The characters had been close friends throughout the duration of their time on the cobbles, and as Norris was laid to rest, viewers took to Twitter to share how much they missed Emily.

“Norris’ funeral and Emily is not there. It just feels so sad and wrong,” complained one viewer.

“You’d really miss Emily Bishop at a time like this,” another penned.

“Awh, it’s sad to see that Emily hasn’t made a return to say goodbye to Norris,” someone else tweeted.

“No Emily and now no Norris. Sad times,” another wrote.