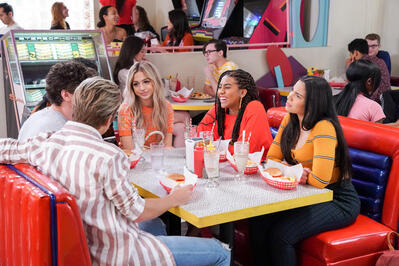 The first episode of Peacock’s Saved by the Bell reimagining (this is not a reboot, as everyone involved is very quick to explain) opens with a scene that instantly catches us up with a character anyone who is even vaguely familiar with the original sitcom will recognize: Zack Morris himself, still played by Mark-Paul Gosselar, now older and 0 percent wiser.

In 2020, Zack has left behind his career as a “successful trial attorney” (in a very funny sight gag, the show uses a photo of Gosselar’s character from Franklin & Bash to illustrate that) to serve as the governor of California — “As part of a scheme to get out of paying a $75 parking ticket” — where he’s recently made a $10 billion education spending budget cut, something Zack doesn’t seem to understand is a major problem. In a few minutes, Saved by the Bell makes it very clear that Zack, maybe unsurprisingly, kind of peaked in high school, which automatically sets the tone for the show. This Saved by the Bell is a more self-aware version of itself, one that doesn’t hesitate to affectionately mock the classic comedy we all know and love.

“It seemed really fun that he was exactly the same,” executive producer Tracey Wigfield told TV Guide. “He’s just avoiding doing math homework and trying to con people out of fifty dollars or whatever. He’s failed upward and failed upward. I feel like that’s kind of what happens to a guy like that, especially in California.”

Zack’s budget cuts also aren’t simply a throwaway joke about the incompetence of the government, but instead function as a way to lay the groundwork for the show’s premise. When the loss of funds forces underserved public high schools to shut down completely, a group of students from the deeply marginalized Douglas High are transferred to the very rich, very white Bayside High, completely shifting the dynamic of a school that hasn’t changed very much at all since Zack, Jessie Spano (Elizabeth Berkeley), Kelly Kapowski (Tiffani Thiessen), and A.C. Slater (Mario Lopez) walked the halls. (Jessie has since become the guidance counselor, while Slater is now, per Wigfield, Bayside’s resident “irredeemable loser” of a football coach.)

“You have these affluent kids that get met with these kids from a school in South Central Los Angeles, and they both grow and learn from each other,” said Josie Totah, who plays Lexi, the most popular girl at Bayside. “Through that, you grow from both sides, and you’ll definitely see our ignorances getting checked, and a lot of growing and learning and unlearning.”

Among the people responsible for that learning and unlearning are the driven and outspoken Daisy (Haskiri Velazquez), her confident best friend Aisha (Alycia Pascual-Pena), and the deceptively aloof Devante (Dexter Darden), all of whom struggle to find a place for themselves in their new environment. While Aisha quickly ends up trying out for quarterback of the football team (“People underestimate her,” Pascual-Pena said of her character’s involvement in a traditionally male-dominated sport), it takes longer for Daisy to find her place, especially as she throws herself into a seemingly hopeless race for class presidency against the popular kids.

“It opens her eyes to how privileged these kids are,” Velazquez said of Daisy’s efforts to fit in. “But surrounded by her Douglas students, she wants to make sure they feel welcomed in this new place. She’s motivated, she’s determined, and sometimes you see her get down on herself, or down on her luck, and she looks over and she sees Aisha or Devante and she’s like, ‘I gotta do it for them,’ essentially.”

That new awareness propels the show forward, allowing it to touch on a host of social topics the original simply could not have, including racism, LGBTQ+ issues, and class disparities. Even Principal Toddman (John Michael Higgins), effectively filling the “dunk tank clown” role Mr. Belding (Dennis Haskins) used to serve, has something deeper going on. Higgins, describing one of his favorite jokes from the pilot where Toddman reveals he has a side hustle as an Uber driver, saw it as a way of commenting on the abysmal salaries public school teachers receive.

“It’s interesting because Tracey is doing a larger issue here which is that teachers don’t get paid enough,” Higgins said. “Tracey is always trying to find these trenchant things that matter in our own society, and more importantly she’s making them funny.”

As Wigfield explained it, “It felt like there was an opportunity to kind of look at some of the things that Saved by the Bell that you loved, but also that didn’t age so well, and sort of lovingly poke fun at it. That’s part of the appeal of why I think it had a cult following, and why people still talk about and have trivia nights about it and stuff, because it was a little cheesy and there was stuff to kind of poke fun at.”

Saved by the Bell premieres Wednesday, Nov. 25 on Peacock.