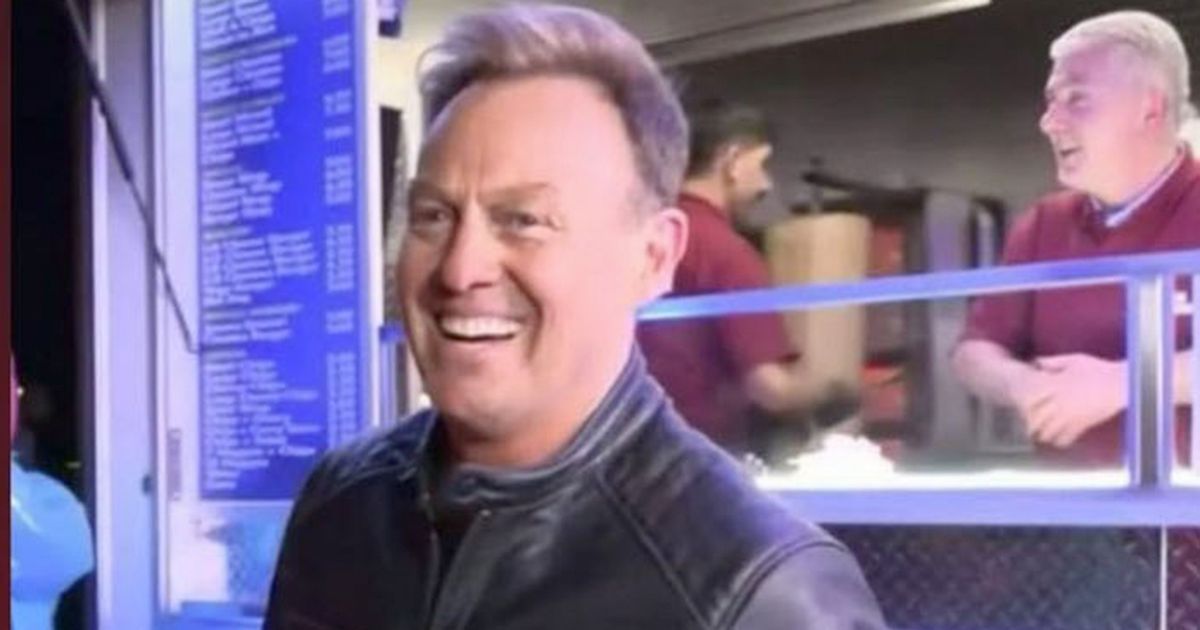 Fans of Ant & Dec’s Saturday Night Takeaway were in hysterics to see Neighbours star Jason Donovan finally eating at the iconic kebab van that is named after him.

The late night food van, a Bristol late-night staple, was celebrated during the latest edititon of the ITV show.

Fans were thrilled as Jason Donovan visited the “punnily” named Jason Donervan, with an excited crowd already formed around the van who were giddy to see the late night favourite get some airtime.

Andi Peters, 51, has been travelling the UK to visit “punny” food vans and presented the segment for the Saturday night show.

The TV presenter went on to ask the team behind the Jason Donervan if they’d ever had a visit from their Neighbours star namesake and when they revealed that he never had, Andi invited Jason to come and get a kebab with “literally with your name on it”.

Saturday Night Takeaway continued from the studio until at roughly 8.15pm when the camera returned to Andi Peters in Bristol with Jason Donovan’s surprise appearance.

The actor, 53, emerged from the crowd to grab the “pretty special” takeaway.

The Jason Donervan was finally visited by the star this weekend

When asked what he would like, Jason said: “A full on doner with garlic mayonnaise and chilli, can I have one of those please?”

He barely had to wait, with the dish being passed over to him within seconds.

Fans of the show that filled up the crowd said that nobody knew Jason would be making an appearance and that after filming was wrapped Jason posed for photos with the team behind the kebab fan before departing in a limousine.

Back in the studio Paloma Faith commented that seeing Jason Donovan eat from the Donervan was “high quality entertainment”.

Jason asked for garlic mayonnaise and chilli with his doner

Jason has recently made headlines when he aired his feelings about Neighbours being axed from UK broadcaster Channel 5.

The performer found his fame on the soap, where he starred as Scott Robinson alongside pop star Kylie Minogue. His character famously went on to marry Kylie’s Charlene Robinson in one of the most-watched soap episodes ever.

He took to Twitter, saying: “@neighbours changed the Australian television landscape. It launched many careers over decades including mine,

“Engaged and entertained audiences for generations.”

He expressed hope that the show would manage to still be broadcast in the UK, writing: “Hoping that it will find a new home with another U.K. broadcaster and continue to provide opportunity and entertainment.”

Jason gained his fame on the Aussie soap Neighbours

Channel 5 confirmed that they would no longer be airing the Australian soap from this summer.

A spokesperson said: “Neighbours will no longer air on Channel 5 beyond this summer. It’s been a much-loved part of our schedule for more than a decade, and we’d like to thank the cast, Fremantle and all of the production team for their fantastic work on this iconic series. We’d also of course like to thank the fans for their loyal support of Neighbours across the years.

“We recognise that there will be disappointment about this decision, however our current focus is on increasing our investment in original UK drama, which has strong appeal for our viewers.”