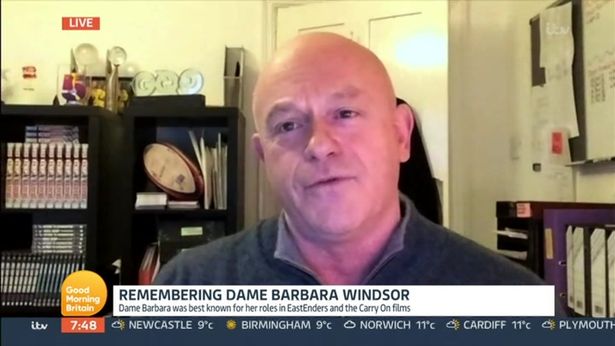 Ross Kemp is in mourning after Barbara Windsor died from Alzheimer’s on Thursday.

And on Monday’s Good Morning Britain he shared with Piers Morgan and Susanna Reid his last chat with the EastEnders icon – who played his on-screen mum Peggy Mitchell on the soap.

Ross explained that Barbara and her husband Scott FaceTimed him last Sunday, and as he grew emotional he revealed that the exchange will stay with him “forever”.

The TV actor – who played Grant Mitchell on EastEnders from 1990 until 2006 – said: “I spoke to her three weeks ago on FaceTime and by that time she was in a very bad state.

“Myself, her family and friends will remember Barbara with love, a smile and affection for the many years of her love, fun, friendship and brightness she brought to all our lives and the entertainment she gave to so many thousands of others during her career.

“Barbara’s final weeks were typical of how she lived her life. Full of humour, drama and a fighting spirit until the end.

“It was not the ending that Barbara or anyone else living with this very cruel disease deserve.

“I will always be immensely proud of Barbara’s courage, dignity and generosity dealing with her own illness and still trying to help others by raising awareness for as long as she could.”