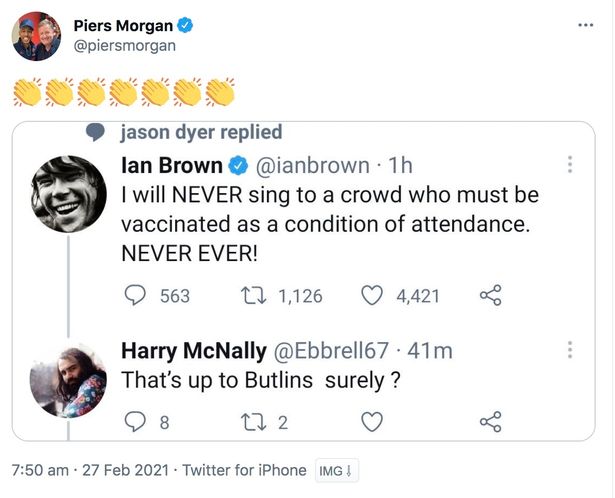 The Good Morning Britain presenter did not hold back when mocking the musician over the post he made saying he would “never ever” play to a vaccinated crowd.

Brown took to Twitter on Saturday and referenced the idea that concert goers would have to be vaccinated to get tickets to live music gigs.

In a tweet that attracted a significant number of replies, Ian said: “I will NEVER sing to a crowd who has to be vaccinated as a condition of attendance. NEVER EVER!’

He then posted two more tweets about the possibility of vaccine identification.

The next said: “Certificate Of Vaccination IDentification aka vaccine passport. We dont need no stinking badges!”

Piers screenshotted the tweet reply and shared it from his own account with a row of clapping hands, savagely slamming the 58-year-old singer.

User @LemonHunny said: “I would never go to see any gig where people weren’t assured of safety, nor by someone who would appear to be anti-vaxxer.”

Throughout the pandemic, Ian has been particularly vocal with his opinions on the validity of the crisis and ongoing vaccine rollout.

He has been quoted as saying that vaccine passports were unnecessary and even compared wearing a mask to “wearing a tin foil hat”.

His comments have even led Jeward to call him out as they said his tweets were “a nightmare”.

In since deleted tweets, Ian had said: “So I’m a conspiracy theorist HA! A term invented by the lame stream media to discredit those who can smell and see through the government/media lies.”

To which Jedward hit back: “You discredited yourself with your backward views and non-logical actions.

“The public have lost all respect and credibility for your views!”