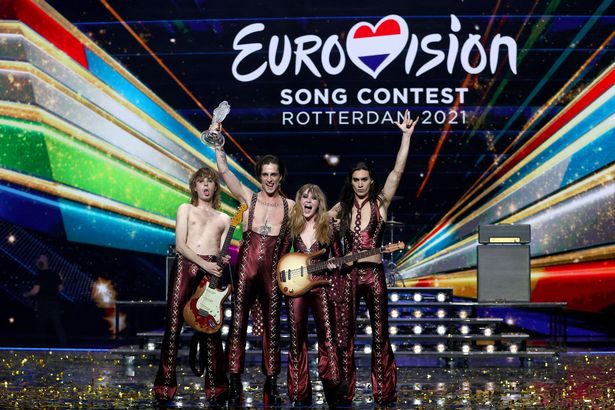 The Eurovision Song Contest turned Twitter into a place of joy, fun, celebration and togetherness – until the scores started coming in.

James Newman represented the UK by singing Embers in a padded pyjama jacket with some giant trumpets behind him. Clearly he had missed the silver and sequins memo that seemed very much the order of the night elsewhere (unless you were rocking a geeky emoji Iceland sweater, Italian heavy metal dungarees or Lithuanian lemon yellow).

BBC host Graham Norton had cheerily talked up our chances after James’s performance – and the dear hope of actually getting some points.

But can you honestly put your hand on your heart and say ours was one of the 12 best performances of the night? Or even the top 20? And someone has to come bottom…

The moment we were put out of our misery was swift and brutal, as we were first to hear the sum total of public votes – a second big fat zero. The vanquished British team toasted their humiliation with beer and a brave face, and the Twitter recriminations stepped up a gear.

But we cannot (just) blame politics and Brexit for our last place. There are plenty of other places to point the finger. (Sorry, James Newman.) Let us know where you think it all went wrong in the comments below – and how we could get back to winning ways.

You surely have to pick one of two ways on Eurovision: go for all out spectacle like winners Italy and pretty much anyone who bought into the silver sequin bulk buy outfits, or stripped back simplicity where you let the song (and the singer) do the work like France and Switzerland. Some giant trumpets and some dad dancing don’t really cut it.

Your song may be naff, but a bit of charisma or endearing gawkiness can cover a multitude of sins. Iceland were super kitsch but owned it. Second last Germany beat us with a big cheesy grin and a sparkly ukelele.

4. Everyone else was just better

Let’s face it, this was a night of spectacular performances. And there were a whole load of other songs that really deserved better. How did Malta not pick up more votes from the public? Why didn’t people give more love to Norway’s angel and demons? To be honest, I’m still slightly baffled at how Italy did win – my metal money was more on Finland, but then I am not exactly a metalhead. Runners up France would surely have won most other years, but Europe came up trumps and we put out an act that wouldn’t get through to the next week of The X Factor.

The inevitable debate has already begun about whether the UK should stop being one of Eurovision’s major funders – and essentially paying for our own annual embarrassment. It is the only reason we are guaranteed a place in the final. Would being forced to go through qualifying make us tougher? Would our rivals look on us more kindly if we had earned our final spot rather than bought it? At least our distinctly average performances would only be watched by the super keen Eurovision fans who tune in for the semi-finals.

Clearly, as much as we try to pretend it’s all just a bit of fun and we don’t really think we have a chance of winning, we do want to win. We do want to finish top of that leaderboard. The question is how?

Former England rugby player Brian Moore posed the question on Twitter last night: “Could Ed Sheeran win Eurovision?” One reply came: “If he did a duet with Adele, had the Spice Girls as backing singers and had a stage full of puppies and kittens…………..we might at a push come 23rd?!”

Maybe we just need to wait a few years and come back with some metal. Or a tribute to Jaja Ding Dong.

What’s your best idea for reclaiming the Eurovision title? Tell us in the comments.