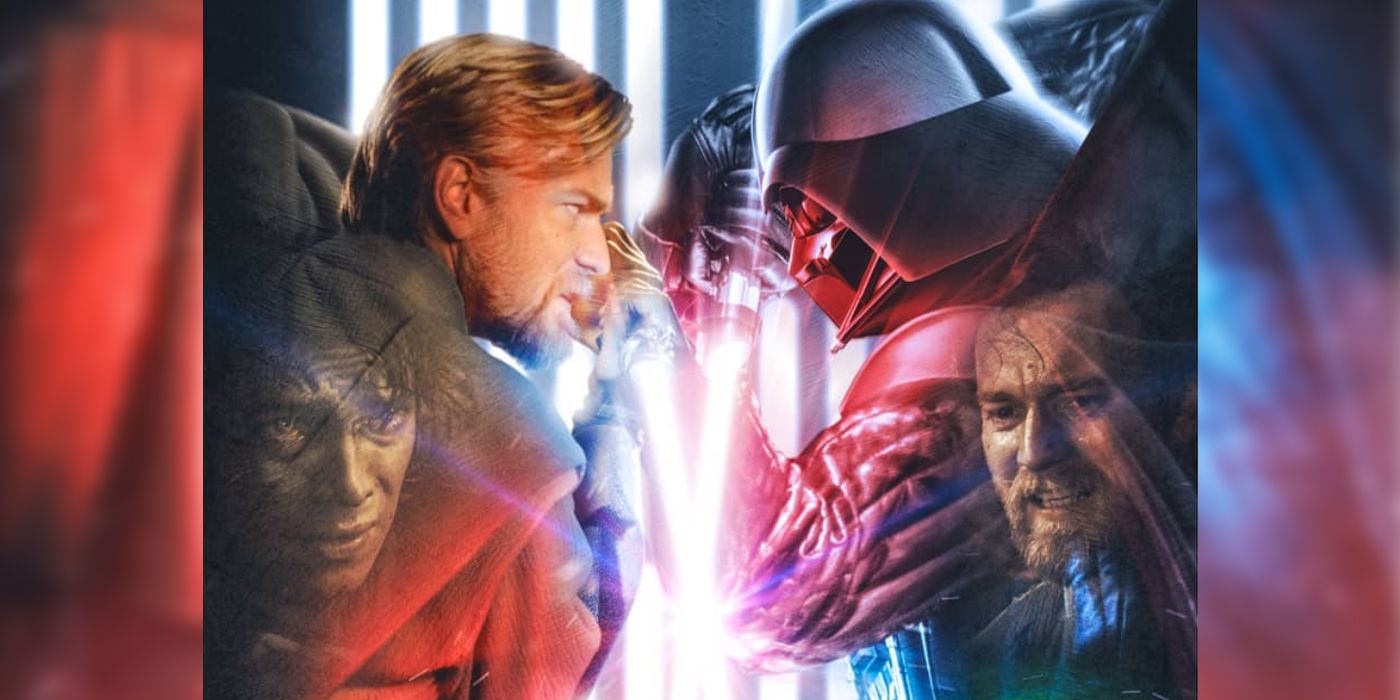 A new piece of fan art for Obi-Wan Kenobi shows the emotional duel between Darth Vader and his former master. While the Star Wars prequels were all controversial upon release, Ewan McGregor’s Obi-Wan Kenobi is considered a highlight of the trilogy. Because of this, fans were ecstatic when it was announced that an Obi-Wan TV show was officially in development, with McGregor returning to his famous role.

While Kenobi was one of the main characters, George Lucas’ whole purpose of creating prequels was to tell the tragic tale of Anakin Skywalker’s fall to the Dark Side. Some of the dialogue in the films is considered cheesy today, but fans have, for the most part, forgiven Hayden Christensen for his portrayal of Anakin. Regardless of one’s opinion of the prequels, it’s hard to argue that Star Wars: Episode III- Revenge of the Sith wasn’t an emotional film. While everyone knew Anakin would turn to the Dark Side to become Darth Vader by the end of the movie, Obi-Wan’s reaction to seeing his Padawan and best friend become a monster was heartbreaking for many fans.

Ultraraw26 has infused that emotion into a piece of fan art for Obi-Wan Kenobi. Obi-Wan’s rematch with Darth Vader is being called the “rematch of the century.” This fan art visualizes what that could look like while also reminding fans of the devastating events that took place on Mustafar. Check out the full piece of art below:

While Christensen’s Darth Vader is returning in Obi-Wan Kenobi, Disney has plenty of other characters they can bring back in the series. Obi-Wan Kenobi takes place ten years after the events of Star Wars: Episode III- Revenge of the Sith. Any of the surviving characters introduced in Star Wars: The Clone Wars or any from Star Wars: Rebels are fair game, but classic characters like Qui-Gon Jinn and Yoda could return as well. It’s also completely possible that Obi-Wan Kenobi could include Rosario Dawson’s Ahsoka Tano, which would connect Obi-Wan Kenobi to The Mandalorian and the other upcoming Star Wars shows.

Regardless of which characters Obi-Wan Kenobi includes, the series has a high probability of succeeding. The Mandalorian‘s success indicates that the future of the Star Wars franchise is better suited for TV shows over movies, allowing Disney to tell a story over several episodes rather than a two-hour feature film. Obi-Wan Kenobi will only be a six-episode mini-series, but Disney proved with The Mandalorian that they can pack a lot of action into a thirty to forty-minute episode. And since Obi-Wan Kenobi will bring back Christensen as Darth Vader, fans will be entertained no matter what.