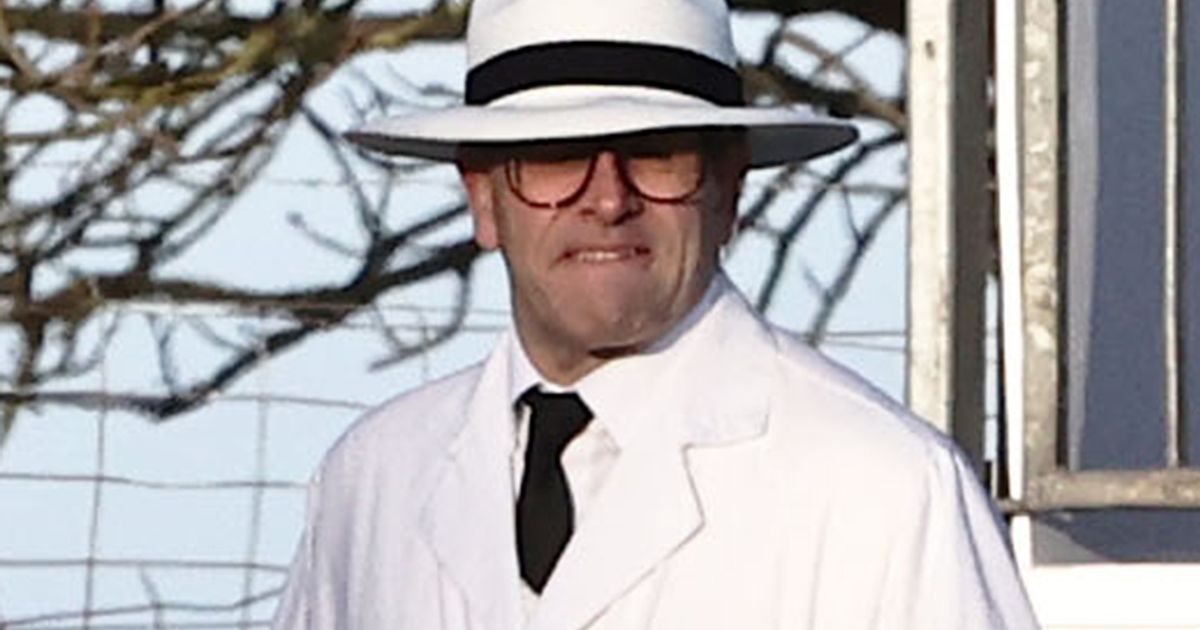 Donning a cricket sun hat, those trademark specs and an oversized white shirt over his suit, Jonny Lee Miller looked unrecognisable as he tried his hand at the game

Jonny Lee Miller has been spotted in his cricket whites after transforming into John Major for the new series of The Crown.

Donning a cricket sun hat, those trademark specs and an oversized white shirt over his suit, the 49-year-old actor looked unrecognisable as he tried his hand at the game.

Having adopted the former PM’s persona, he looked rather awkward as he stood near the stumps in front of a group of flashing cameras.

Last year, it was revealed that Jonny would be joining the next series’ stellar line-up alongside the likes of Imelda Staunton, Jonathan Pryce and Elizabeth Debicki, which will follow the monarchy during tumultuous period of the 1990s.

The announcement of Jonny’s appointment had been widely welcomed by fans as they express excitement at the veteran actor landing the role.

Several fans flocked to the comment section to share their thoughts, with one saying: “The Crown never disappoints with their casting. They always pick the right actor for the job. Jonny Lee Miller is a tremendous talent. I can’t wait to see him join one of the best television series ever made.”

He was wearing those trademark specs
(

Others expressed their surprise at the casting decision, suggesting that the two figures are complete opposites.

“Hair and Make Up must be one hell of a department. With a clean shaven face and some hair gel I think it might work, we’ll have to see,” added another.

John Major with Margaret Thatcher in 1991
(

Another fan said: “Tbf I’d be skeptical they could pull it off but they managed to make Gillian Anderson Thatcher.”

Some of Johnny Lee Miller’s most notable roles include Trainspotting and Elementary, the latter of which earned him a Satellite Award nomination for Best Actor.

He will portray Margaret Thatcher’s successor, John Major, who was in charge of leading the country from late 1990 to 1997.

An insider has also revealed to The Sun that producers were precisely looking for someone that viewers would think was a surprise casting choice.

“It may seem like an unlikely casting as the two men couldn’t be more different, but the creators of the Crown aren’t interested in an actor playing a version of themselves,” the source said.

They added: “But at 48, Jonny is actually the perfect age to play Sir John, who became PM at the age of 47 after Maggie was removed from power.”