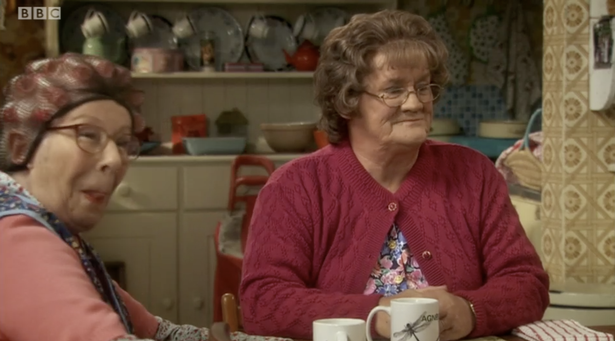 Mrs Brown’s Boy’s aired its second festive special on Friday night, as fans were overjoyed to see the show return.

And it even contained an outtake scene between Agnes Brown (Brendan O’Carroll) and Winnie McGoogan (Eilish O’Carroll).

Agnes and Winnie were discussing the fact that Agnes had discovered her husband Redser Brown had fathered an illegitimate son.

Struggling to get to grips with the word “illigitemate”, Winnie asked: “Have you decided what you’re going to do about Redser’s interlitimate son?”

But each time, Agnes told him he was not supposed to be in this episode.

“Oh, but I’ve got a script?” he replied confusedly.

One viewer tweeted: ” #MrsBrownsBoys quoting lines from the wrong scene but they keep it in”.

“My tummy hurts from all of the laughing at #MrsBrownsBoys I don’t think the script was needed the amount it was ignored,” wrote another.

A third added: “Another funny episode of @MrsBrownsBoys one thing for sure is that it never fails to make me laugh #MrsBrownsBoys “.