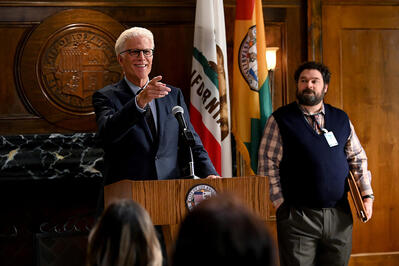 It was The Good Place‘s demonic Shawn who said he took the form of a white man for a reason: He could “only fail up.” Ted Danson is a long way from the Good Place in NBC’s Mr. Mayor, but he plays a man who has definitely failed up. In his career. Not, unfortunately, in the quality of the show.

Mr. Mayor, premiering Thursday, stars Danson as Neil Bremer, newly elected mayor of Los Angeles. A former outdoor advertising bigwig (think of him as the Don Draper of Nurse Jackie billboards), Bremer came out of retirement to run for mayor seemingly on a whim, though he eventually admits it was really to impress his teenage daughter, Orly (Kyla Kenedy), a plan that seriously backfired. Orly is horrified he won. So, too, is new chief of staff Mikaela (Vella Lovell), the PR wiz who put him here and now has to make the best of it.

In short, Neil has no idea what he’s doing. The problem is that the show doesn’t either. Created by Tina Fey and her 30 Rock co-showrunner Robert Carlock, Mr. Mayor hasn’t figured out whether it likes local government — or people in general. In the first two episodes made available to critics, the tone veers inconsistently between Veep‘s political cynicism and Parks and Recreation‘s gentle amusement with all that red tape. It isn’t always clear whether we’re meant to care about the characters or just laugh at their inflated egos.

If the writing were funnier, maybe its muddled tone would be easier to forgive. There’s a touch of 30 Rock‘s off-the-wall weirdness in some of its best jokes, but Mr. Mayor — which was originally intended to be a New York-set spin-off for Alec Baldwin’s Jack Donaghy — feels most like 30 Rock when it aims its sense of humor at the wrong targets. The pilot takes on cancel culture with all the nuance of Mr. Bean weighing in on cancel culture. Everything is problematic now! it shrugs, and stops there. “Did you post the black square on Instagram?” Holly Hunter’s Arpi Meskimen asks Neil. “Either way, how dare you.” As Arpi, a self-righteous, granola-crunching city councilwoman, Hunter is trapped in a horrible wig and saddled with a thankless role as Mr. Mayor‘s activist punching bag. Whether Mr. Mayor eventually gets kinder or more caustic, it’s not going to figure itself out until it figures out Arpi.

Orly, a satire of Gen Z wokeness, doesn’t fare much better, but at least there’s warmth in the Bremers’ father-daughter relationship, which has the potential to become the heart of the show. When Neil and Orly drop their masks around each other, they’re sweet. (Those are metaphorical masks; Mr. Mayor is set in a timeline where COVID-19 existed but has been eradicated because “Dolly Parton bought everyone a vaccine.”) As for the sitcom legend at the center of the show, Danson’s take on Neil is basically a repeat of the well-meaning but clueless fish-out-of-water act he perfected on The Good Place. The fact that he’s so inherently likable makes it harder for the show to skewer his privilege, but he’s fun to watch, finding humor in lines that wouldn’t be funny in anyone else’s mouth.

If you’re a single-issue sitcom viewer, maybe that’s enough. Even if it’s not yet as funny as it should be, and even if something about the show makes me embarrassed to admit this, I did laugh — more than once! — at Mr. Mayor. A handful of laughs and a first-rate cast might help the new comedy fail up in its first term. But if it wants a shot at reelection, Mr. Mayor will have to find out what it stands for.