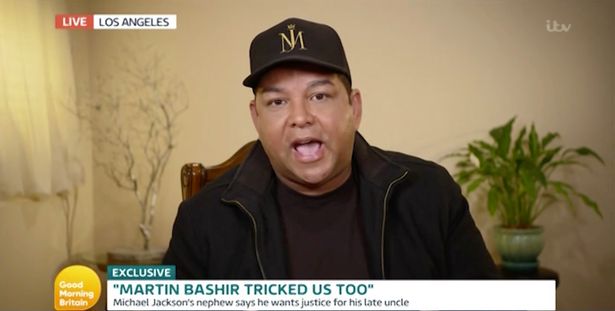 Michael Jackson’s nephew has called for an “investigation” into Martin Bashir’s documentary with his uncle, suggesting that the journalist used a letter written by Princess Diana to hook him in.

Appearing on Good Morning Britain, Taj said that he wanted to “hear some accountability” and accused Bashir of “destroying [his] uncle’s life”.

It comes after a report into Bashir’s interview with Princess Diana, published last week, concluded that Bashir acted inappropriately and in serious breach of BBC guidelines.

Former director-general Lord Tony Hall has said he accepts the 1996 BBC inquiry into how Panorama secured its interview with Diana, Princess of Wales “fell well short of what was required” and he was “wrong to give Martin Bashir the benefit of the doubt”.

After the report was published, the BBC is believed to have written to the royal family to apologise, according to PA news agency.

“It was a stupid thing to do and was an action I deeply regret. But I absolutely stand-by the evidence I gave a quarter of a century ago, and again more recently.I also reiterate that the bank statements had no bearing whatsoever on the personal choice by Princess Diana to take part in the interview.

“Evidence handed to the inquiry in her own handwriting (and published alongside the Report) unequivocally confirms this, and other compelling evidence presented to Lord Dyson reinforces it. In fact, despite his other findings, Lord Dyson himself in any event accepts that the Princess would probably have agreed to be interviewed without what he describes as my ‘intervention’.

“It is saddening that this single issue has been allowed to overshadow the Princess’ brave decision to tell her story, to courageously talk through the difficulties she faced, and, to help address the silence and stigma that surrounded mental health issues all those years ago.

“She led the way in addressing so many of these issues and that’s why I will always remain immensely proud of that interview.”