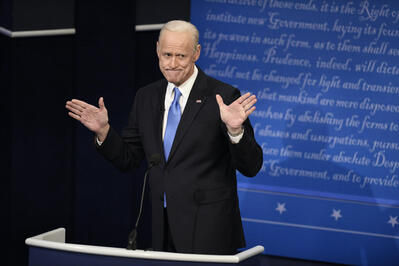 There was no question that Saturday Night Live would tackle the final Donald Trump-Joe Biden presidential debate in the cold open, with Alec Baldwin reprising his role as Trump and Jim Carrey returning as Biden. Maya Rudolph also showed up — not to play Kamala Harris, but instead to take on the moderator, Kristen Welker, who Baldwin’s Trump referred to as “Hoda,” “Padma,” and “Mindy” (“I love your project,” he added).

Rudolph’s Welker opened the sketch, which she referred to as “the second and, praise Jesus, final debate,” by reminding the candidates that she had a mute button. “Tonight we have a mute button, because it was either that or tranquilizer darts, and the president has a very high tolerance for those after his Covid treatment,” she said.

Baldwin’s Trump was his usual self, immediately casting aside concerns about the severity of COVID-19. “We’re rounding the corner,” he said. “In fact, we’ve rounded so many corners we’ve gone all the way around the block that we’re back where we started in March.” To which Carrey’s Biden replied, “Come on, man, we’re in the middle of a third wave! Where I come from if a girl gave you a third wave, you were practically married.”

After Carrey’s Biden said his first “malarkey” of the night, in reference to a claim made by Baldwin’s Trump about COVID-19 coming from China “on a plane piloted by Nancy Pelosi,” Rudolph’s Welker showed her “Biden Bingo” board (which had already marked off squares like “Here’s the Deal” and “Horse Puckey”), encouraging everyone watching at home to take a shot.

As Baldwin’s Trump made increasingly wild statements, such as insisting that “the army” would be administering coronavirus vaccines by shooting it through “a cannon, into your face,” Carrey’s Biden was shown growing increasingly frustrated with him, and at one point he even went full old Hollywood. Rudolph’s Welker noted, “Looks like Mr. Biden is so mad, he’s Eastwood-ing it a little bit.”

Baldwin’s Trump also continually referenced his tax audit, and even brought in his lawyer, Rudy Giuliani (Kate McKinnon), in effort to explain why he couldn’t reveal his health care plan yet. The real Giuliani, of course, had a busy week of his own thanks to a scene in Sacha Baron Cohen’s Borat Subsequent Moviefilm, and McKinnon’s version of him was immediately caught in yet another compromising position by the cameras. “Is this another Borat?” he demanded. “You gotta tell me if it’s a Borat.”

In their closing statements, Trump’s Biden boasted his belief in America’s low unemployment rates across all groups (“brunettes, MILFs, LGBTQanon”), Carrey’s Biden reiterated his reliability to voters. “There’s only two things I do,” he added. “I kick ass and I take trains, and I don’t see any trains in sight. And that, ladies and gentlemen, is no malarkey.”