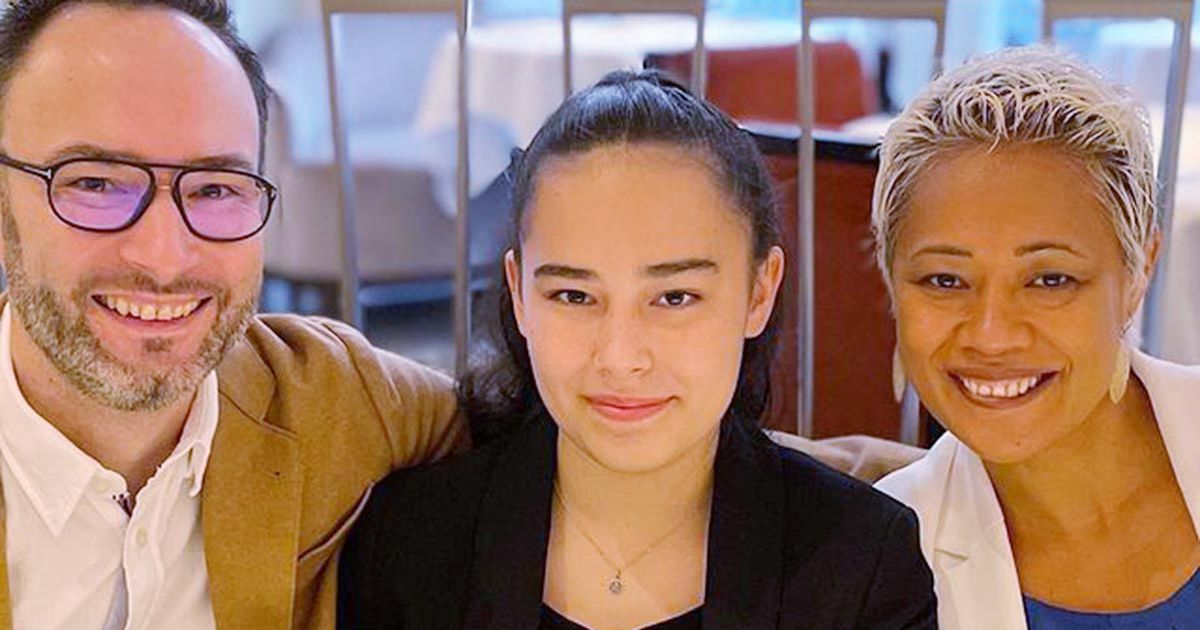 MasterChef:The Professionals’ Monica Galetti opens up about life outside the show and the release of her new cookery book of very special dishes – At Home: My Favourite Recipes

As a judge on MasterChef:The Professionals, Monica Galetti doesn’t mince her words or seem to have any qualms about telling the chefs exactly what she thinks. Not only that but she remains cool at all times, even when things get heated in the studio.

So we’re surprised when we sit down to talk to her that the mum-of-one admits in the early days of the hit show she was shaking with nerves behind that firm but fair facade. “I was sick to my stomach,” reveals the 46-year-old about starting her TV career in 2009.

Monica left her home in New Zealand at the age of 23 and headed to London to follow her dream of becoming a top chef. She soon made a name for herself as the first female sous chef at Michel Roux Jr’s London restaurant, Le Gavroche. Seven years later, she opened her first restaurant, Mere, with her sommelier husband, David.

Now as well as her MasterChef duties and hosting BBC2’s Amazing Hotels, she’s releasing a new cookery book of very special dishes. At Home: My Favourite Recipes For Family & Friends draws influences from growing up in both Samoa and New Zealand, and all that has wowed her taste buds over the years.

Here, she tells us about how she juggles her busy life, what her teenage daughter Anais thinks of her cooking and how she feels about fame…

Hi Monica! Your daughter Anais is 14 – is she showing any signs of following you and becoming a chef?

Definitely not. She only comes into the kitchen when she’s hungry. She’s very musical
and it looks like she’s heading for a career in music production and songwriting.

What are your earliest memories of learning
how to cook?

Being in the kitchen with my mother from an early age.
I was raised in the Pacific Islands, so I remember picking fruit every morning for breakfast or collecting the eggs from the chickens in the garden. It was a very simple life, but we had all of these fresh ingredients on our doorstep.

You were born in Samoa and brought up in New Zealand – do the flavours of these countries still influence your cooking now?

Yes, they really do. It’s the freshness of the ingredients we had there, which in a way we took for granted back then. Even today that is how I prefer to cook – I still insist on using fresh ingredients, even when I’m cooking at home.

Definitely, it’s a whole lot more relaxing than what I do on television. Having a teenage daughter at home means I like to cook simple meals, rather than the two or three dishes we have to create on MasterChef.

As both you and your husband David work long hours, how do you balance work with your home life?

I live by my diary, so I balance that with my husband so we both get time to spend with our daughter. When I’m filming MasterChef things get difficult – but we always find a way to have time together as a family.

Out of all the chefs you’ve worked with, which one do you think has been the greatest influence on you?

The Roux family, without a doubt. Michel Roux Jr is like
an older brother to me and he constantly pushed me to learn – even when I was young and I probably didn’t appreciate what he was doing for me.

You’ve been very open about the hurdles you’ve had to overcome in your career, not just as a woman, but a woman of colour. Have you found speaking out about racism important to you?

It was always about having to adapt. There have been moments when comments have been made and because I’m strong enough to speak up about it, it’s helped me. Having the strength and confidence to speak up about racism is what matters. Some people don’t realise that what they are saying is wrong – they think it’s acceptable.

Working in a restaurant kitchen can be very challenging – do you think it’s easier today for women to become a success in the restaurant business?

I’d like to think things are changing, but it does depend
on what level of kitchen you are working in. A high-end kitchen
is far more high pressure. Most restaurants are having to adapt to the way they treat their
staff. So I think there has been a change.

In 2009 you became a judge on MasterChef: The Professionals – were you nervous about going on TV?

I never planned to go on television, it was just by chance. When the producer phoned me up to tell me I had got the job,I nearly threw up – that’s how nervous I was.

On Desert Island Discs you said there was a time when you never watched the show back, because it gives you panic attacks…

And that is still true – I don’t watch much of it at all. I tend to only watch the final when
it tends to get exciting.

When the show first aired you were being likened to the Simon Cowell of cookery. How did you feel about that?

I found that very hard at first. I actually like Simon because he says it the way it is. But I had no media training to prepare me for that. Social media was just kicking off in those days and to see all those comments about me was just a bit too much to cope with. Being compared to Simon was one of the least offensive things said about me.

You’ve hosted Amazing Hotels: Life Beyond The Lobby with Giles Coren since 2017. Will there be a fourth series?

Yes, we’ve just started filming and we were in Iceland which, of course, was freezing cold. Giles is great fun to work with – it’s like travelling with your best friend. We have so much in common when it comes to food.

At Home: My Favourite Recipes For Family And Friends by Monica Galetti, published by Octopus Books, is out now