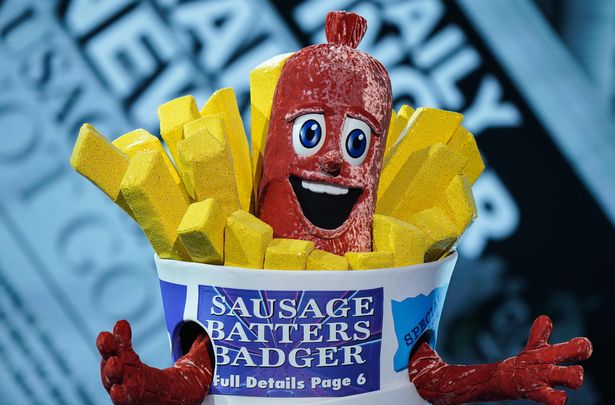 Sausage has left fans stumped over their true identity – and they will continue to tease who they really are after a last minute costume change tonight on The Masked Singer.

This evening, Sausage takes to the stage once once again… but there is a change to her newspaper wrapping, which some eagle-eyed viewers might notice.

The headline cheekily changes to ‘Sausage Batters Badger’, referencing their singing battle in the first episode on Boxing Day that saw Sausage triumph over Badger.

As a result, Badger landed in the bottom three, but was saved from elimination by the judges.

“I think it definitely sounds like Stacey, I do,” admitted Coleen Nolan straight away. “There’s elements of it and also… she loves sausage and chips.”

Brenda Edwards wasn’t so sure. “I think it’s an older lady who might be black, ” she mused.

“I sit there with my eyes close and I think it’s an actress who we don’t think can sing.”

Ruth Langsford then interrupted to say some fans of the show had questioned if the masked singer was actually Brenda.

Brenda, who like Stacey shot to fame on The X Factor, bore a look of surprise and shrugged – sparking a few raised eyebrows in the studio….