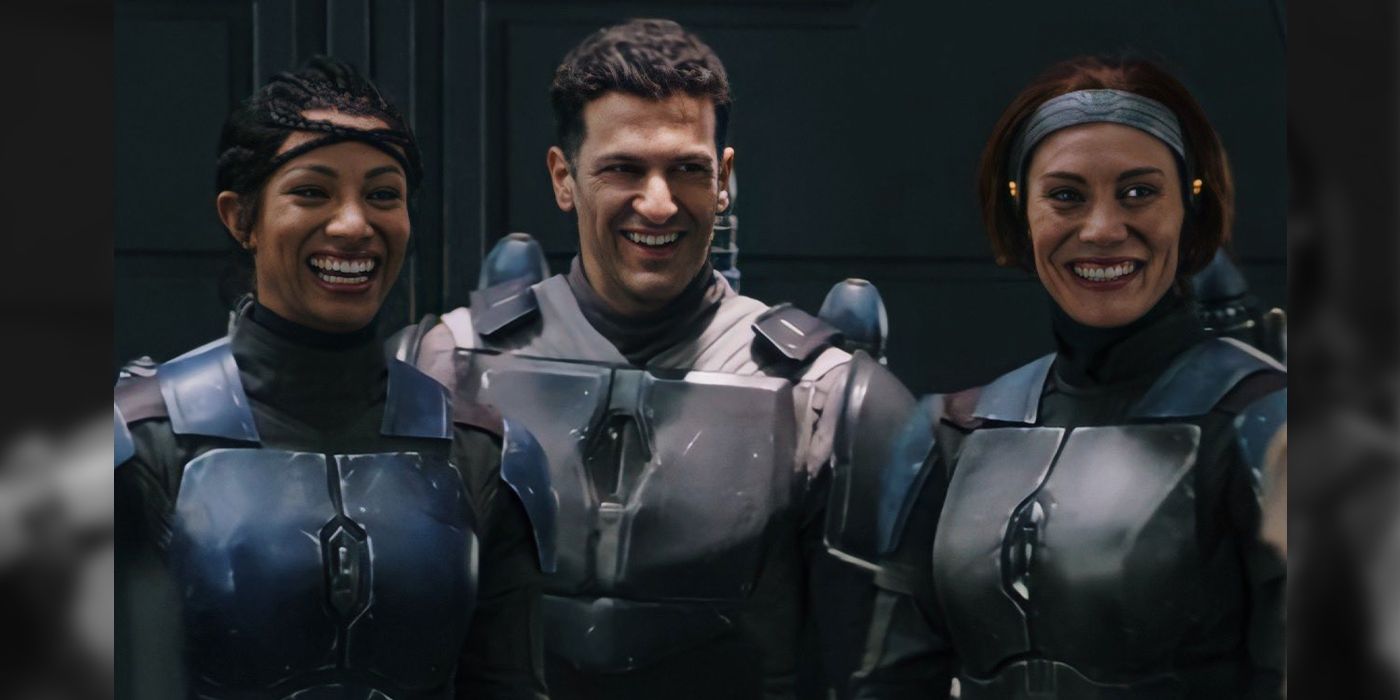 The Mandalorian actor Simon Kassianides shares a new behind-the-scenes photo of the Nite Owls to ring in the New Year. Kassianides appeared in The Mandalorian season 2 as Axe Woves, a name created by George Lucas himself. The actor only appeared in the episode “Chapter 11: The Heiress,” but it was an important episode since it introduced three new Mandalorians, Bo-Katan, Koska Reeves, and Woves.

The introduction of Bo-Katan was a highlight of the season for fans since she was a character in Star Wars: The Clone Wars. In the animated series, Bo-Katan is the sister of Satine Kryze, who ruled Mandalore before being killed by Darth Maul. This storyline was adapted for the live-action TV show, with Bo-Katan tracking down Moff Gideon to take back the Darksaber, allowing her to reclaim Mandalore. When the Nite Owls were introduced in The Mandalorian season 2, they help save Grogu and Din Djarin before getting their fellow Mandalorian to help raid an Imperial Gozanti-class cruiser.

Now, Kassianides has shared a new BTS image from his episode, posing with co-stars Sasha Banks and Katee Sackhoff. The image may not reveal any hidden details from the episode, but it gives a good look at their armor as they smile at something off-screen. Check out Kassianides original tweet below:

Axe Woves didn’t return in The Mandalorian season 2 finale alongside Bo-Katan and Koska Reeves, but there is still plenty of ways he could return in the future. The Mandalorian season 3 will have to find a new story to tackle now that Baby Yoda has gone off to train with Luke Skywalker. In the season 2 finale, Mando defeats Moff Gideon for the Darksaber, making him the rightful ruler of Mandalore. The Mandalorian season 3 will more than likely involve a confrontation between Din Djarin and Bo-Katan since the only way she can claim the Darksaber is by defeating him in combat. If Bo-Katan is a main character in season 3, then her two companions will likely be involved as well.

Even though Bo-Katan was highly anticipated by fans, the group’s introduction was well-received by fans due to Bryce Dallas Howard’s direction and the actors they chose to play the Nite Owls. This was Banks’ first role outside of WWE, Sackhoff was the voice actress for Bo-Katan in Star Wars: The Clone Wars and Star Wars: Rebels, and Kassianides is most known for his role on Agents of SHIELD. The Mandalorian‘s cast has varying degrees of experience, but by the looks of this photo, they had fun on set too, which usually makes filming go smoother.