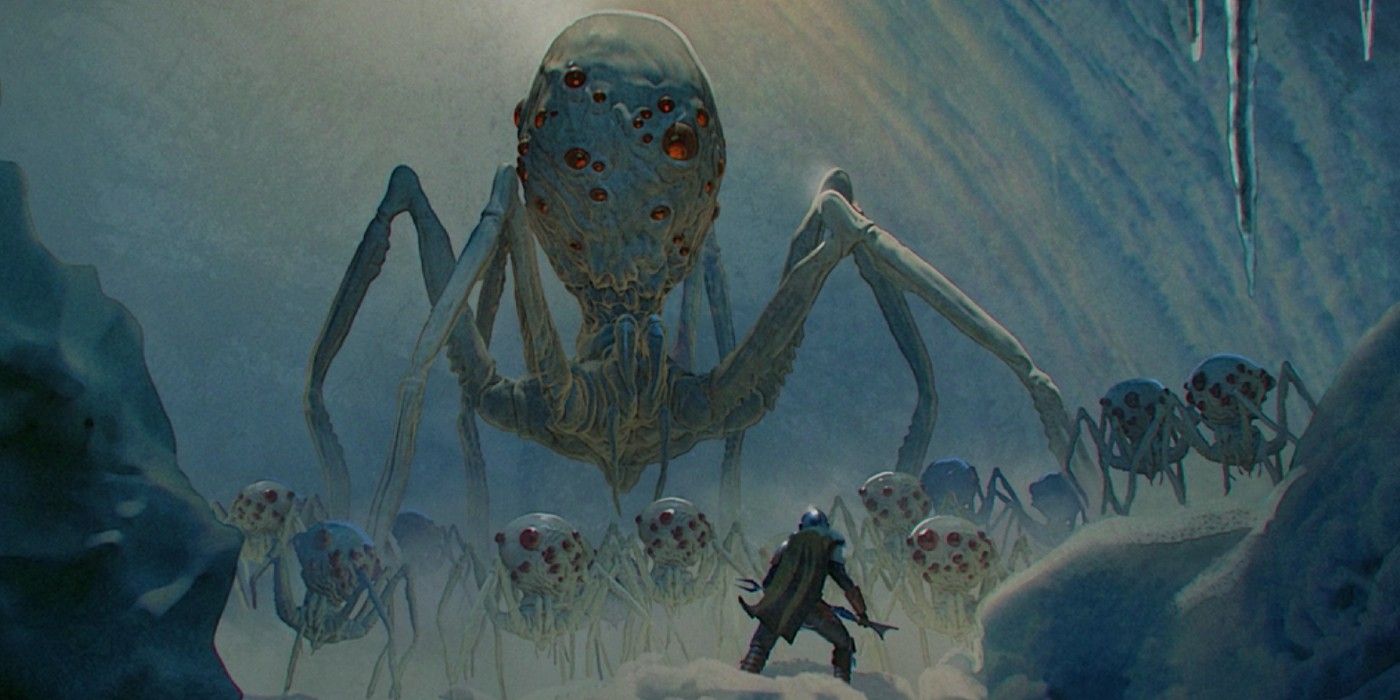 The Mandalorian season 2 episode 2 ice cave spiders are confirmed to be a new species. Star Wars has obviously introduced many a fascinating monster over the years, beginning with the original 1977 movie and its memorable rogues’ gallery of alien creatures big and small, good and evil, humanoid and otherwise.

Many of these exotic Star Wars aliens are of course basically human in their behavior, but many of them do fall firmly in the “scary monster” category, belonging more to the world of dark fantasy and horror. Memorable examples of pure monsters from the original trilogy include the garbage compactor creature that tried to drown Luke in Star Wars, the mynocks that terrorized the Millennium Falcon in Empire Strikes Back and the famous Boba Fett-eating Sarlacc pit monster from Return of the Jedi. Over the years since then, the array of monsters to grace Star Wars lore has only grown, as more movies and TV shows have arrived to expand the original universe.

The Mandalorian is clearly more than happy to carry on this tradition of menacing Star Wars monsters, and indeed season 2 has already seen the arrival of a pair of such memorable creatures. Episode 1 of course featured an epic showdown between Mando and his allies and the krayt dragon, a massive sand worm-like creature with an appetite for banthas (and the occasional Tusken Raider). Episode 2 also featured the arrival of a new monster species in the form of terrifying ice cave spiders that nearly ended Mando, Baby Yoda and their new friend known only as Frog Lady. Fans immediately noted the similarity between these spiders and previously known Star Wars creatures the krykna, but it’s been confirmed by Lucasfilm artist Phil Szostak via Twitter that these spiders are a totally different species that happen to be based on the same Ralph McQuarrie design for “knobby spiders” that inspired the krykna. See his tweet on the subject in the space below:

In the latest episode of Mandalorian, Baby Yoda first encounters the eggs of these previously-unseen spiders in an ice cave on a planet where he and Mando have crashed while trying to evade a pair of Rebel Alliance X-Wings that were harassing their ship. At first the eggs seem harmless as Baby Yoda is able to break one open and eat the embryo inside (Baby Yoda’s appetite for exotic treats appears insatiable) but the other eggs then start hatching, which brings forth other spiders including one massive queen. Mando and the others race back to the ship, pursued by hundreds of spiders of varying sizes, which only further complicates the sticky situation they’re already in.

Ultimately the ice cave spiders serve no greater purpose than last episode’s krayt dragon, representing a “monster of the week” opponent for Mando and company to overcome. Design-wise they’re maybe not super interesting, as they’re just spiders of various sizes, but their introduction via eggs reminiscent of the ones from Alien was an effective moment as it showed Baby Yoda allowing his curiosity to get him and his friends in some trouble. It’s unlikely the ice spiders will show up again in The Mandalorian, as the show moves on to other monsters and eventually perhaps even begins addressing many burning mysteries, including Baby Yoda’s origins, what Moff Gideon is up to with his darksaber and what Ahsoka Tano has to do with any of this. But for one episode they made a definite impression.