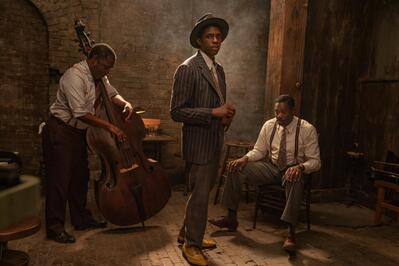 The cosmic alignment surrounding the Netflix film Ma Rainey’s Black Bottom is impossible to ignore. What other way can one explain how this spellbinding adaptation of August Wilson’s 1984 play not only boasts Oscar-winning actor Denzel Washington as a producer but Tony winner George C. Wolfe as its director?

More impressive still is the movie’s ridiculously talented ensemble led by Oscar and Tony-winning Wilsonian Viola Davis and the incomparable Chadwick Boseman in his final and best performance. Boseman lost his battle with colon cancer in August and the haunting intensity he brings to his role in Ma Rainey’s Black Bottom forces the viewer to examine the blurry lines between the mortality salience the actor likely suffered and that of his character.

Make no mistake, Davis commands respect as the titular “Mother of the Blues.” And the gold grill, grease paint, and padding she dons undoubtedly transform her into a ferocious full-figured frontwoman fighting to assert her dominance in a male space powered by Black talent but subjugated by white men. Although Ma Rainey’s Black Bottom is set in 1927 Chicago, it’s tragic that many of these same dynamics remain within the music industry.

Despite Davis’ gravitas as Ma Rainey, Boseman steals every scene he can as her trumpeter Levee. He’s a sinewy rapscallion whose charming smile and boundless ambitions belie a violent and racist childhood trauma that tethers him to his past. First, he bumps heads with Ma Rainey onstage with a grandstanding trumpet solo. And later, he infuriates her by trying to jazz up the bluesy arrangement of one of the songs she plans to immortalize on an album at a small and suffocating record studio. It is over the course of this hot Windy City day within this tattered studio and the rehearsal room below it, that most of the 90-minute film, reverently written and adapted by Ruben Santiago-Hudson, takes place.

Not only does Levee want Ma’s level of fame and his own band — things that the record label’s owner Sturdyvant (Jonny Coyne) implies he can give him — but Levee recklessly makes a play for Ma’s flirty flapper girlfriend Dussie Mae (Taylour Paige). It’s an act of betrayal the possessive and openly lesbian Ma doesn’t take too long to suss out and shut down.

Adding to the tension are Levee’s run-ins with his fellow bandmates Cutler (Colman Domingo), the trombone player and the band’s proxy leader when Ma is away, and Toledo (Glynn Turman). He’s the gray-haired piano player who cautions Levee not to value flash and fun above stability and humility. Cutler and Levee, meanwhile, bump heads because of Levee’s atheism and Cutler’s unyielding belief in God. Domingo (who is currently transfixing us in the first Euphoria special) makes a number of powerfully subtle choices with his body language and speech when portraying Cutler, giving the character unwavering dignity and dogmatism.

Even before things get religiously philosophical, Levee and Cutler riddle each other with trash talk with Cutler’s melodic and succinct use of the N-word giving him the verbal upper hand. Time spent in a Black barbershop is all the proof needed that this is how Black men talk to one another away from the white gaze. And Wolfe, Santiago-Hudson, and the cast fiercely honor Wilson’s authentically Black monologues and exchanges as well as the working-class men and women the late playwright worked so diligently to exalt and portray. These men are musicians, but they are working-class musicians.

Michael Potts, who will always be Brother Mouzone for diehard fans of The Wire, rounds out the band as Slow Drag the bass player. Slow Drag is also the only one who knows how to avoid Ma’s wrath and Levee’s ire. Lastly, Dusan Brown plays Ma’s speech-impaired nephew, Sylvester, and Jeremy Shamos costars as her placating but self-interested manager, Irvin.

Wolfe and cinematographer Tobias Schliessler also do a brilliant job of affording Ma Rainey’s Black Bottom the visual space it needs to look and feel more cinematic and less like a stage production. This includes Ma’s tent show in the lushly green backwoods of Georgia, vibrant pops of gold on city buildings and a montage of disheartened Black Chicagoans. While some Black people found success in the North, others learned the hard way that even with better paying jobs, they’d traded the aggressive Jim Crow racism of the South for a more casual version.

Turman, who has played Toledo onstage, holds his own and demonstrates that after 60-plus years as an actor, he’s still in demand. And just as he did in the most recent season of Fargo, Turman delivers one of the most powerful monologues in the production. He even learned how to play the piano for the role, a requirement the film’s composer Branford Marsalis placed on all of the actors so that they would look convincing while performing as a band.

Ma Rainey’s Black Bottom is darn near perfect, but it is not without its flaws. The biggest being that the audience learns a lot about Levee’s past and his motivations but not enough about Ma. Beyond her push to exert her authority and the way she flouts gender and sexuality mores, there are still a lot of unknowns. Although Googling her name fills in a few blanks on the real Ma Rainey, the role would’ve been more dimensional had she been fleshed out beyond her defiance. This makes what Davis is able to do with the role all the more impressive because what she doesn’t establish physically she draws from emotionally.

Because after all, Ma Rainey’s Black Bottom is full of emotion and pathos just the way Wilson wrote it all those years ago. But even the playwright would’ve marveled at how all of these players and pieces fell into place at just the right time to make this the strongest iteration of his work to date. Although Washington plans to turn more of Wilson’s Pittsburgh Cycle into feature films, none will be better than this.