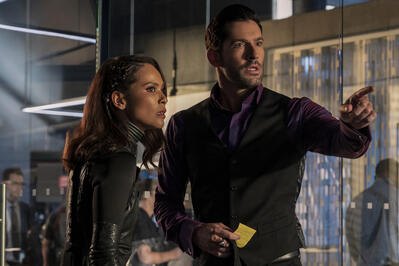 It’s been hell on earth waiting for the second half of Lucifer Season 5 ever since the first eight episodes premiered on Netflix in August. Considering how insane that major midseason finale cliffhanger was, we totally wouldn’t blame you for sending up a quick prayer that Lucifer returns for Part 2 of the season soon.

Netflix first announced its unconventional release schedule for Lucifer Season 5 back in 2019, confirming that the 16-episode season would be cut in half, with eight episodes debuting in August of 2020 and the rest premiering at a later, unannounced date. The midseason finale saw Lucifer (Tom Ellis) and Amenadiel (D.B. Woodside) duke it out with their brother Michael, only for God (Dennis Haysbert) to finally show up after five seasons of ghosting his kids in order to break up the fight. And heaven help us, that’s actually where they left us!

Right now, we know plenty of details about the back half of Season 5, even if we don’t know how the whole God situation will pan out. Read on to find out everything we know about Season 5 Part 2!

There’s no premiere date yet. Netflix has not announced when the second half of the season will debut, but TVLine reports that the series went back into production to finish filming Season 5 and start filming Season 6 in the back half of September. We’re likely looking at an early to mid-2021 release date for Part 2. At least we have the Season 4 blooper reel to watch while we wait?

It’s not the final season like we thought. Season 5 was supposed to be the end of the series, but for the second time, Lucifer got itself un-canceled. The sixth and actual final season will begin filming directly after production wraps on the final episodes of Season 5.

Just a little taste of our musical episode 😈#LuciferSeason5part2 pic.twitter.com/UZpqQOOwdh

Aimee Garcia also gave a sneak peek at the dance rehearsal for the musical episode via Instagram.

We’ve already got info on guest stars. Entertainment Weekly reports that ’80s pop star Debbie Gibson will guest star in the musical episode as Shelly Bitner, a controlling helicopter mom. And yeah, she will be singing! Matthew Bohrer will also appear in Season 5 Part 2 as a new character, Donovan Glover.

Eve (Inbar Lavi) will be back. Though she wasn’t in the first half of Season 5, Entertainment Weekly reports that Lavi will appear as Eve in the fifth season, and she’ll reunite with the demon whose heart she broke, Maze (Lesley Ann-Brandt).

Part 1 of Lucifer Season 5 is currently streaming on Netflix.