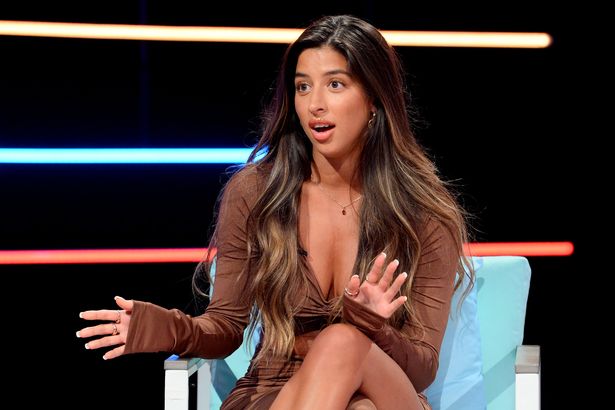 Love Island: Aftersun made its return to the airwaves on Sunday night and as usual the main show’s evicted contestants were available to spill their thoughts.

It’s already been a week since Love Island’s eagerly anticipated return and despite some labelling this year’s series as a slow burner, there have already been many twists and turns.

Fans were shocked when one of the pre-show favourites Shannon Singh was sensationally booted out after newbie Faye Burrows stole her man just a few days in.

And now on the spin-off show on ITV2, the Scottish beauty let rip about certain members of the group.

She asked host Laura Whitmore if she should “spill the tea” on her thoughts of fellow islanders.

Laura excitedly said: “Yes, spill the tea! You know what? I’m Irish, I love tea. Give me some tea.”

Shortly after her first appearance, her family was forced to put out a statement after several members had received death threats.

They have since brought in police to try to track down the vile trolls.

Back on the main show on Sunday night, fans were left fuming after the usual cliff hanger ending.

Fans were on the edge of their seats awaiting the decision of new girl Rachel Finni about which boy – Chuggs Wallis and Brad McClelland – she was going to couple up with and which would be leaving the villa for good.

However, despite the episode building up to the decision, fans will have to wait a bit longer to find out who the villa’s new couple is after the credits started rolling just as she was about to say a name.

Fans will now have to wait until Monday evening’s show to discover which boy has been dumped and will be forced to fly home.

Love Island airs weekdays and Sundays at 9pm on ITV2.