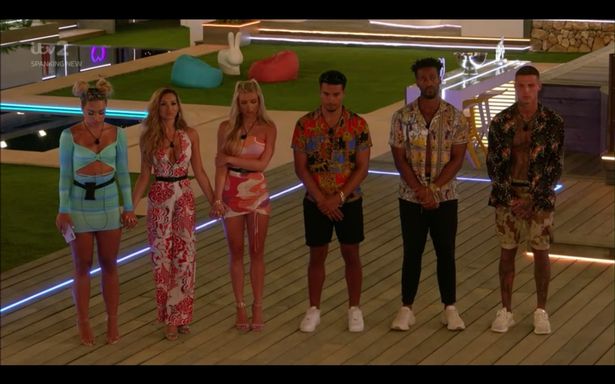 Love Island fans were left annoyed at the show amid a double dumping twist, as the episode ended on yet another cliffhanger.

Six Islanders were told they were at risk of being ditched then and there, and it was up to the remaining Islanders to decide who goes.

While the dumping has already taken place, viewers will not find out who goes until Wednesday night’s episode – despite the scenes appearing to be filmed on Monday night.

Faye Winter shocked the villa during Tuesday’s episode when she confirmed something was happening, before the drama got underway.

Receiving a text message, she read out: “Islanders. Can you all gather around the fire pit.”

One viewer said: “Producers dropping yet another cliffhanger AND 3 bombshells at the end of tonight’s episode like we expect anything less from them this series.”

Another agreed: “Dear @LoveIsland, when you make every single dumping/recoupling/episode a cliffhanger it removes all impact. It’s just annoying.”

This was echoed by a fifth viewer who commented: “There ain’t no cliffhanger in this crap anymore. This show is so dead. See you tomorrow at 9pm.”

Meanwhile, a sixth viewer tweeted: “Can we get a petition going where it goes to parliament where #loveisland doesn’t finish on a cliffhanger.”