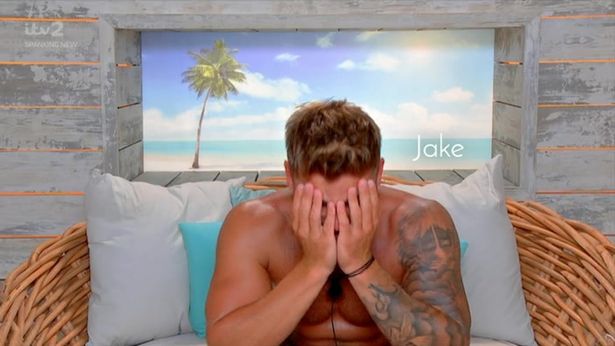 Love Island fans are concerned for Liberty after tuning into Monday night’s episode of the ITV2 dating show.

The latest instalment began with the boys sneaking off to Casa Amor, and they certainly didn’t look sad about leaving their girls behind.

As they relaxed in the new villa, a group of new girls strutted in and a few jaws certainly dropped.

As they greeted the new ladies, Jake was seen grinning and later spoke about the arrivals in the Beach Hut.

Holding his head in his hands, Jake told the camera: “I can’t even talk!” and went on to say that some of the new girls are “my type”.

And Liberty was keen to make sure that he didn’t forget about her when she packed a black lacy bra in his suitcase.

But one girl who didn’t care about the boys moving out for a few days was Chloe.

The newly single Islander is currently in a friendly pairing with Hugo, and was delighted when the new boys arrived.

“Literally couldn’t be more smug,” she declared before saying: “I love Casa Amor!

“It’s all I want in this life, is champagne and men!” she added.