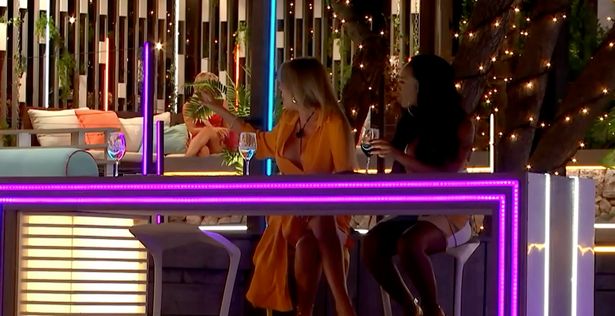 Love Island’s Faye and Chloe are embroiled in a furious clash tonight after Chloe makes a move on Toby.

Lettings manager Faye, 26, demands that Chloe “shut up” as the fallout from her confession plays out this evening.

Chloe admits to Lucinda that she fancies Toby and goes on to make out with him during a challenge with the rest of the Islanders.

Kaz is left fuming over the snog and brands Chloe a “snake in the grass”.

The row continues on as Chloe appears to allude to her falling out with the two new bombshells Millie and Lucinda as she complains: “I can’t be a**ed with all this drama!”

But Chloe and Faye’s feud may have been bubbling for quite some time after fans noticed that there appears to be some discord between them.

It comes after Chloe was named as the girl all the boys would like to couple up with yesterday if they couldn’t be with their current partner.

Faye was not pleased with the announcement and it has made things really tense, while Chloe admitted that it had been “awkward”.

Faye grumbled: “Oh cool, whatever. Do what you need to do why don’t you? Stroke the girl’s ego a bit more. She doesn’t need it, but who am I to judge.”

Chloe said: “It was a little bit awkward slash very awkward. I didn’t force them, they chose.”