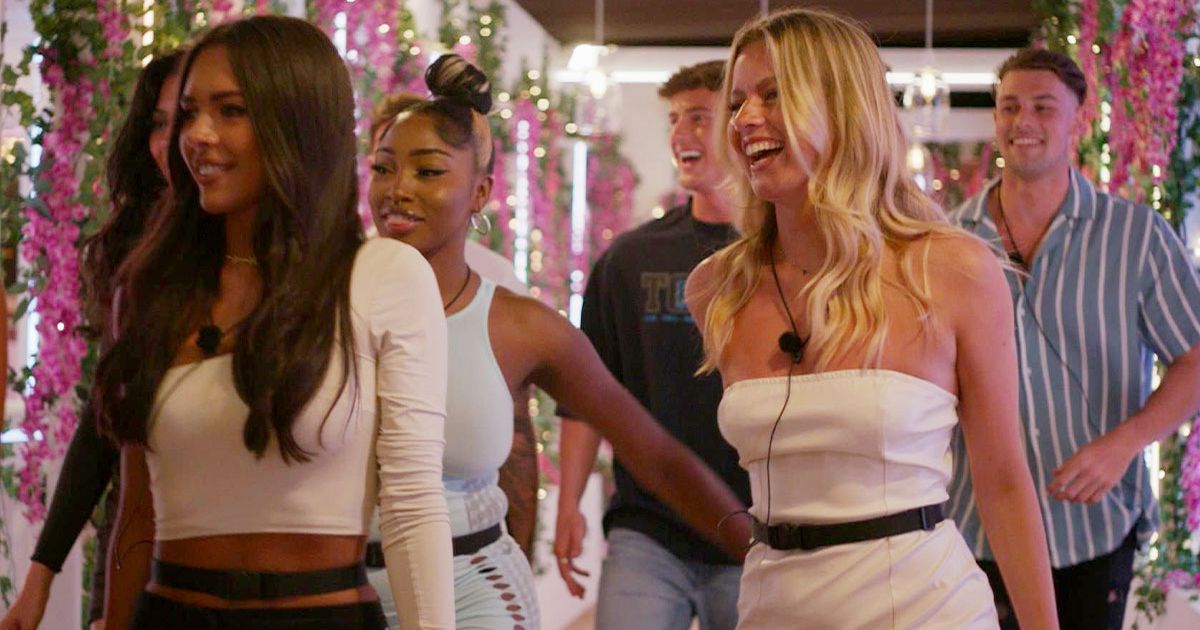 It may seem like the contestants do what they want – but the truth is there are many rules and regulations they have to follow in the villa, and a number of everyday items that are strictly prohibited from the Love Island 2022 villa

Love Island: The girls discuss the men they’re coupled with

The season of romance is well underway as Love Island 2022 has finally graced our screens after much anticipation.

With a brand-new villa and 11 eager contestants ready to start “moving mad”, the latest season is sure to be a scorcher.

It may seem like the contestants do what they want – but the truth is there are many rules and regulations they have to follow in the villa, and a number of everyday items that are strictly prohibited.

ITV bosses have introduced many rules over the years in an attempt to keep everything in check.

For example, eagle-eyed viewers might have noticed that you never see islanders smoke cigarettes in the villa.

With a brand-new villa and 11 eager contestants ready to start “moving mad”, the latest season is sure to be a scorcher

Although some of the islanders make questionable choices in the villa – you never see them drunk.

This is all down to the strict rules they must follow during their time in the Majorcan mansion.

If you’ve ever wondered why the Islanders never seem to get drunk during the parties and evenings, it’s because their alcohol limit is restricted.

Aside from the lack of booze and rules around smoking, research commissioned by Vera Clinic has found there are strict rules around what everyday items are banned from the iconic villa.

Here’s a look at the daily essentials that you didn’t realise Love Islanders can’t take into the villa with them:

In a recent TikTok video from Chloe Burrows, the runner-up from last season, she revealed that fake tan was banned in the villa.

Since the bedroom is a big part of the Love Island episodes, producers did not want the white bedsheets to get destroyed by unsightly fake tan stains so the Islanders are banned from adding a golden glow.

Back in 2021, the rules in the villa were even stricter than usual due to Covid still being a huge problem in the outside world.

Since glam squads weren’t allowed inside to prevent mixing, eyelash extensions were banned and the contestants had to live without their regular beauty treatments throughout the duration of the show.

The villa’s bathroom is stocked full of beauty products
(

Since the UK’s biggest beauty and health retailer Boots is sponsoring this year’s show, they have stocked the villa with a range of beauty, skincare, sun cream, and male grooming products for the Islanders to use.

The products tend to be on display for promotional purposes so the contestants do not need to bring their own beauty products with them.

Although each contestant is given their own phone on the show to take photos and receive the famous ‘I’ve got a text!’ messages, their personal phones are strictly banned from the villa.

Islanders are subject to the ultimate digital detox being unable to have any outside contact with their friends and family or log into their social media accounts.

Since there are cameras rolling 24/7 and any moment throughout the day can be aired on TV, the Islanders are prevented from being naked.

Of course, the shared nature of the villa means that this should be a given, but the contract makes the contestants agree to be dressed appropriately at all times when on the show.

The Islanders are lucky enough to be given a continuous flow of new clothes to wear as part of partnerships with the show’s sponsors.

This means that they are not allowed to wear any of their own clothes if they contain identifiable brands, logos, or slogans.

For the past three years, I Saw It First has sponsored Love Island but this year, the show is working alongside eBay to promote wearing more sustainable, preloved clothing.

Islanders have no concept of time in the villa
(

Most of us have never experienced life without knowing the time but for the Love Islanders, they have to adapt to life with no concept of time.

With no watches and clocks allowed inside, it has also been reported that the time is covered up on the oven and the hot tub.

Past Islanders have said they have to use the sun to gauge the time of day and are told when to sleep and wake up by the producers.

Although it makes sense considering that contestants are not permitted to have any form of contact with the outside world, there is no WiFi connection in the villa.

Amy Hart from season 5 of the show revealed that the phones they were given are “jail-broken”.

Everything but the camera and text messages are strictly off limits.

The Islanders are subject to very strict rules and regulations
(

Drugs and other illicit substances such as legal highs or steroids are strictly forbidden.

Contestants can take prescription medication as long as this has been approved by the production team before entering the villa.

According to The Sun, all Love Island contestants faced drugs tests before entering the villa.

There is no rule saying the islanders can’t get frisky – but this has to be with a partner.

While previous contestant Elma Pazar said it was likely Islanders do it off-screen, she admitted: “there are cameras everywhere, even in the toilet.”

No inappropriate language or bullying

The ITV production team are very strict about any inappropriate language or bullying behaviour.

Contestants are strictly forbidden from making inappropriate remarks or comments.

Bullying or aggression towards other contestants or member of the production team could result in dismissal from the show.