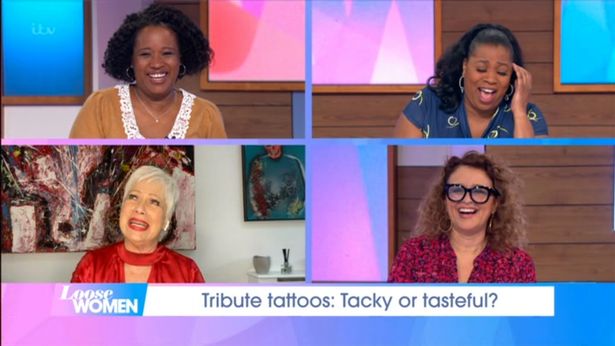 The stars of Loose Women were divided as they gave their opinion on Brooklyn Beckham’s huge new tattoo.

Over the weekend the eldest son of Victoria and David Beckham revealed his latest tribute to fiancée Nicola Peltz, having already undergone four inkings dedicated to the actress.

This time, Brooklyn, 21, opted for a love letter from his future wife printed across the back of his neck and lower back.

After Piers Morgan labelled the tattoo ‘weird and creepy’, the stars of Loose Women weighed in to give their verdict.

Denise Welsh kicked off the discussion by admitting: “I feel like we have become a very judgemental as a nation….

“Having said that, I think it’s the worse thing I’ve seen in my entire life.

Guest Gary Barlow also weighed in on the debate adding: “It’s a personal thing. Your’e going to have it for the rest of your life and whatever comes next. If its personal and meaningful than so be it.”

Congratulations to Brooklyn Beckham, who’s – what is he? He’s a famous child. He’s taken to Instagram to show off his latest inking on the back of his neck.

“It’s his fifth permanent tribute that he’s made to his American actress fiancee, Nicola Peltz. It shows her eyes and a load of guff he’s written.”

He went on: “Imagine if they break up? He’s going to have to get someone else’s eyes. There’s going to be a lot of eyes on that back by the time he’s older!”